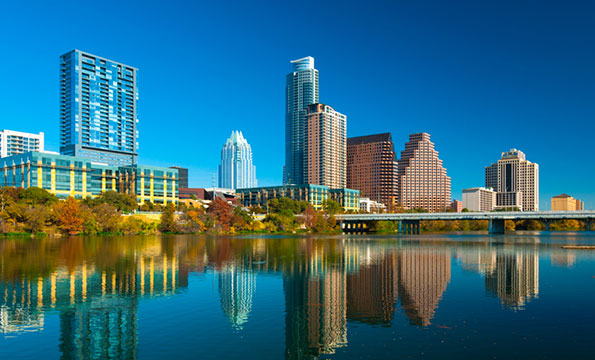 JW Marriott opened a 1,012-room hotel in Austin today that is the biggest in the city and the brand’s largest in North America.

JW Marriott Austin, which broke ground approximately 2 1/2 years ago, is the second-largest JW Marriott in the world. It is 34 stories tall and provides 112,000 sq. ft. of meeting space divided among 42 rooms. Several large meetings and conventions—including South by Southwest Festival, 4C Environmental Conference and Abila—already have booked their events at the hotel.

The property has a fifth-floor pool deck and bar, some of the largest guest rooms in the city (with outstanding views), three restaurants—Osteria Pronto, Corner and Burger Bar—and a full-service Starbucks. Some 800 people are employed at the property, which has earned LEED Silver Certification and a two-star Austin Green Energy Building rating.

Design elements celebrate the spirit of Austin and Texas, including large columns throughout the hotel built from Texas limestone; a topographical map of Austin on the lobby ceiling and floor; illuminated artwork behind the check-in area that resembles a magnified cactus graphic; and a large outline of the Texas etched into the bottom of the fifth-floor pool.

The hotel is located on the square block bounded by Second Street, Third Street, Brazos Street and Congress Avenue in downtown Austin and is within walking distance to major attractions such as the Austin Convention Center, Texas State Capitol, Ann & Roy Butler Hike and Bike Trail on Lady Bird Lake. More than 520,000 room nights have already been booked through 2021, with the first guests arriving today.