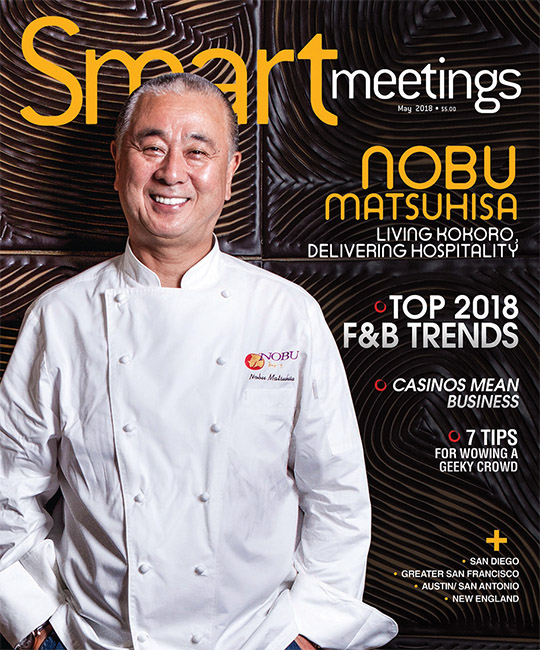 In Smart Meetings’ May issue, don’t miss the profile of Nobu Matsuhisa, the famous chef who has been called the culinary Madonna — due to being widely known by first name only. We dive into Matsuhisa’s hospitality empire, which focuses on giving guests the best experience possible through creativity and authenticity.

In this issue, we also explore the cosmopolitan San Diego, sweet and savory Birmingham and Mobile in Alabama, the maker movement in New England, and the eastern Canadian cities of Quebec City, Montreal, and Toronto, among others. We also have a tech-filled issue this month, giving major tips on planning meetings for techies as well as digital upgrades to make your event productive.

Smart Meetings is an event planning publication covering meetings, industry news, including expert opinions and interviews, topical articles, coverage of destinations and venues in the U.S and worldwide, and features stories on incentive, corporate, government and association meetings.

Upgrade Your Event with These Tech Innovations

Meeting planners manage approximately 12,647 details throughout the year. And with each passing year, more of them are related to technology. Tech now helps planners engage attendees before the in-person…

Meeting 2.0: 7 Tips for Planning a Meeting for a Techie Crowd

Every industry has its own distinct flavor, as any meeting planner can tell you. A human resources convention does not have the same feeling as a motorcycle trade show, and…

Chefs and Planners Weigh In on 2018 F&B Trends

What’s hot, and what’s not? How can planners wow their groups on a budget? We pulled some of America’s top chefs aside and got them to spill on this year’s…

For 10 months a year, he travels. And from Athens to Kuala Lumpur, from Moscow to Dubai, from Budapest to Beijing, there will be a white chef’s coat waiting. He…

For a behind-the-scenes look at how to mount a successful opening celebration outdoors in early spring, we chatted with Kathleen Cherubin, marketing manager at Hilton West Palm Beach in Florida.

What is your vision of the future? Gazing into your personal crystal ball may be more important than you think, according to futurist Glen Hiemstra, kickoff speaker at Smart Meeting…

Preparing for a Leaner Commission World

The news that Hilton Hotels & Resorts will follow Marriott International in cutting commissions to third-party planners from 10 to 7 percent was met with a combination of groans, sobs…

How You ‘Move’ Through Life Affects Everything

Right now, whether you are aware of it or not, your body is adjusting to meet the demands of the moment. That could mean shifting positions in your seat to…

Catch Your May Smart Style

These seven gifts are sure to put a spring in your step and open up the world of summer. You could even win one of the products!

Meet You at the Beach House

A 60-pound fish can nearly pull a grown man into the sea. How do I know that? Because I watched as one of our party of five on a deep-sea…

Event planners are always looking to make a lasting impression. Beyond a great keynote speaker and spirited breakout sessions, the entertainment portion of an event itinerary is a memorable moment…

Meeting professionals are expected to be a walking office-supply closet. And when a coordinator is busy juggling registration, swag bags, attendees, catering, entertainment and vendors, there is no time to…

Health and Wellness How To Strategy

How to Avoid Tech Wreck

Tech wreck. Otherwise known as online addiction. Can we agree it’s a problem? Good. That’s the first step toward a better tomorrow. When it comes to smartphones, some 75 percent…

Projection technology has been used for decades in meetings by projecting a film or presentation onto a white screen. Now, projection mapping, also known as video mapping and spatial augmented…