When a flurry of signature Las Vegas casinos threw open the doors on Thursday after more than two months of downtime to help the world flatten the curve on a pandemic, the pent-up demand was evident. Customers were eager to return to a world beyond their homes. Despite reports of overcrowding at some venues in the desert city, brands on The Strip were adamant they would live by letter of safety plans submitted to Nevada Gaming Control Board.

The openings were part of phase two of the Nevada United: Roadmap to Recovery plan.

Steve Hill, president and CEO for Las Vegas Convention and Visitors Authority, stressed the importance of a safe transition back to welcoming visitors. “Las Vegas is a city built on hospitality, and we are thrilled to open our doors on June 4 and welcome visitors from around the country,” he said, while also acknowledging that things may look a little different.

Many properties and restaurants are operating on modified schedules and have spaced out slot machines and poker tables to ensure social distancing. Movie theaters, showrooms, fitness centers and spas remain closed during this phase. And the famous all-you-can-eat buffets were nowhere to be seen.

“We are very pleased by the enthusiasm we are seeing from guests ready to come back to Las Vegas,” said Bill Hornbuckle, MGM Resorts’ acting CEO and president. “As business demand increases, we are able to open additional properties and bring more of our employees back to work. Getting people back to work, coupled with providing a safer environment for our employees and our guests, are our top priorities.”

That reopening included a Seven-Point Safety Plan with employee temperature checks and COVID-19 testing, a mix of required and strongly suggested masks, handwashing stations on the casino floors, contactless check-in, digital menus and a special email address for guests who test positive after visiting an MGM property. 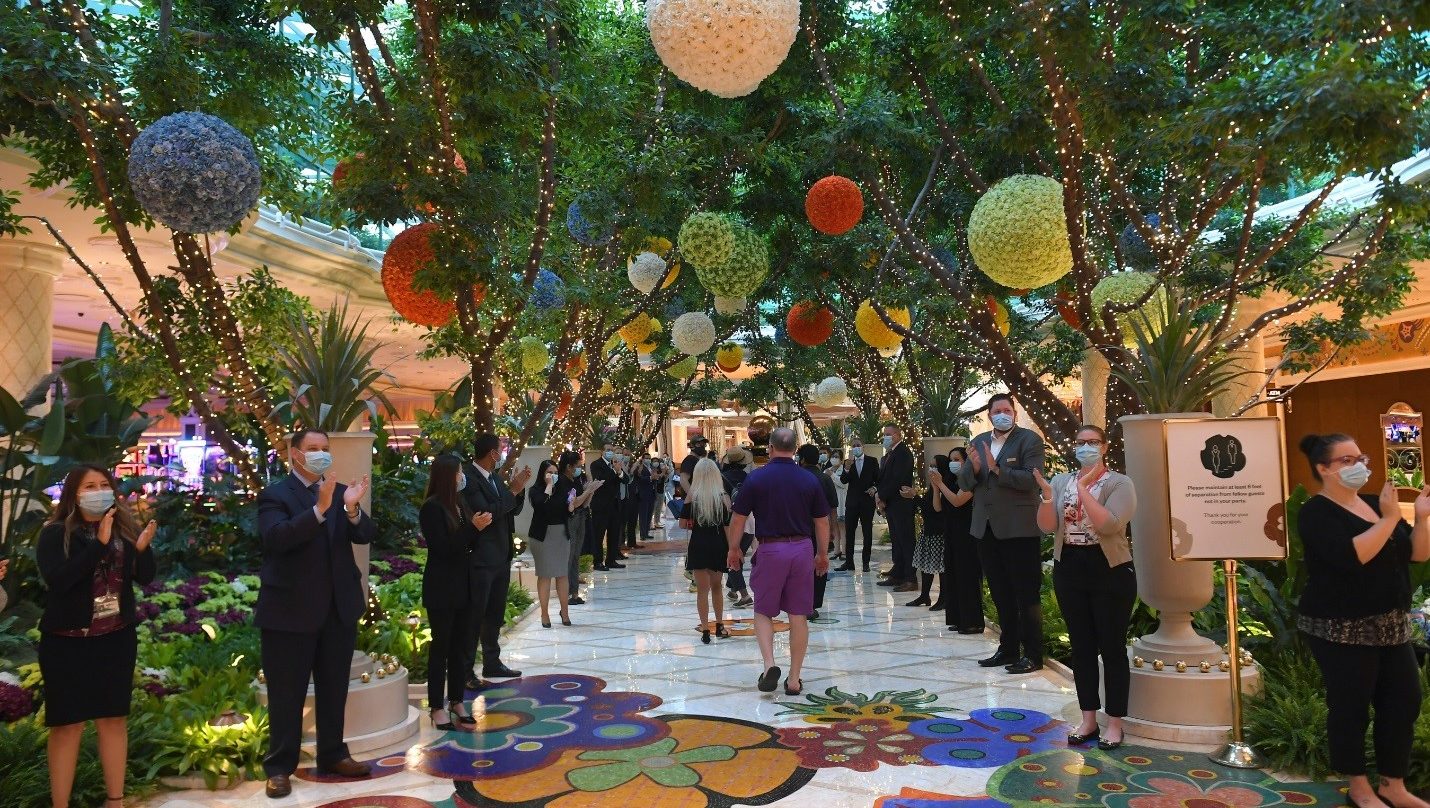 Caesars Entertainment CEO Tony Rodio opened Caesars Palace at 10 a.m. with an assist from a tuxedoed Wayne “Mr. Las Vegas” Newton. Bookings were limited to 75 percent of the 4,200 rooms at the resort and were completely sold out. Caesars Entertainment also opened The Linq Promenade (including High Roller Observation Wheel) Thursday, with a similar reception. Harrah’s Las Vegas followed today with the debut of a new, $200 million transformation of guest rooms, the casino floor and Ruth’s Chris Steak House.

Based on demand and price point, Linq could be the next Caesars property to open, followed by Paris Las Vegas, Bally’s Las Vegas and Planet Hollywood after the Fourth of July.

Lisa Messina, vice president of sales, described the mood as “pure excitement” on the part of not only guests, but also employees, in a city where the hospitality workforce accounts for 60 percent of jobs. “People want to dress up and see if they can still find their dress shoes,” she said.

How to Mix Safe and Fun

The Caesars openings were based on rules that called for team members to wear masks and “strongly recommend” that guests do the same, while also maintaining a six-foot distance while in the hotel. In the casinos, the number of people per gaming table is now limited, and in a major departure from pre-pandemic rules that banned face coverings, masks are required.

To make complying more fun, celebrities and celebrity chefs recorded a video demonstrating the practice. Even Real Housewives of Las Vegas star Lisa Vanderpump showed off her sequined mask and exclaimed, “This is what we have to do so others feel safe, and we can get back to business!”

For those who don’t bring a mask and would prefer a fun, logoed face accessory rather than the free plain version offered at check in, an assortment is available at Caesars gift shops.

Just to get into a Caesars building, visitors had to walk past a thermal scanner and go through further screening if they registered over 100.4 degrees Fahrenheit.

“Everyone is taking precautions because we don’t want to see it closed again. People are showing respect on The Strip,” Messina said.

Messina saw the positive response from vacationers as a good sign for meetings. “Leisure travelers are going to set the confidence meter for meeting attendees to travel again,” she said. “When event organizers see that people are ready to travel, they will feel better about moving ahead with events.”

Caesars already has some small groups moving forward with meetings in June, plus a few more sizeable gatherings in July that would fill 800 rooms each with 1,200-1,500 people. In August, ConferenceDirect, HelmsBriscoe and Experion are scheduled. Past Labor Day almost everything is intact. Only two groups have cancelled.

CES has indicated that it is moving ahead with its planned January event, but details about how it will be produced are still being worked out.

“We are just waiting on restrictions to be released,” Messina said.

She is particularly excited to welcome groups to the massive new Caesars Forum, which was set to open just as restrictions went into place in March. “It was devastating, because it had been contracted, so there was not a week open from March to end of year,” she said. “It is this beautiful diamond, and we can’t wait to show it off.”

Messina saw Las Vegas as the perfect place to pioneer the return to meetings. It boasts spaces large enough to socially distance 2,000 people, while still complying with all the regulations and guidelines. “We can work with customers to determine their tolerance for risk and their goals, diagram a solution in the largest pillarless ballroom, and we will all learn what works best together,” she said.