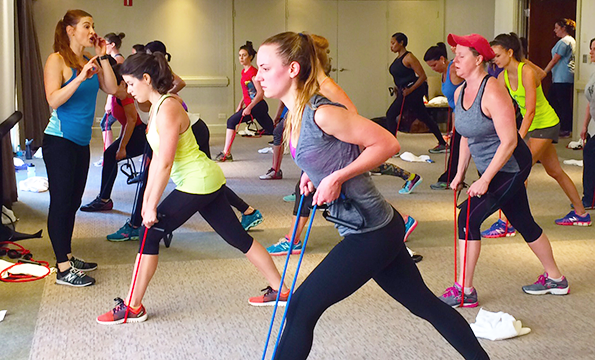 I must admit that I felt a little trepidation when my editor chose me to represent our magazine at the Westin’s inaugural Wellness Escape event in San Diego. Although I hike regularly and consider myself moderately fit, I began to worry when I discovered that the all-women retreat would be led by fitness guru Holly Perkins.

Perkins, who has trained many A-list celebrities and has an abs as flat as an ironing board, would be shepherding us through grueling boot camp sessions designed to build muscle and burn fat. Although the thought of having a stomach that even slightly resembled hers was enticing, it was also intimidating. The fact that she was insisting that we all pack a bikini made me start to sweat.

I made a beeline to my local Athleta, as I knew my standard workout wear (old leggings and a faded Rolling Stones t-shirt) would not cut it in such elite athletic company. I bought some new exercise duds, as well as a bathing suit that was fashionable and (more importantly) camouflaged some of my indiscretions. Despite my nagging feeling of insecurity, I was excited about the upcoming experience.

I arrived at the lovely Westin San Diego Gaslamp Quarter and had about five minutes to peek at the packets of protein powder and other goodies left on my bed before the program began.  I raced down to the terrace where I was issued a water bottle that could be infused with a variety of fresh fruits and/or herbs. Mojitos were on my mind as I filled my bottle with lime and mint leaves, however there was no rum to be found. Evidently, this was going to be an alcohol-free weekend.

Over tiny appetizers (that I didn’t realize until later were actually dinner), I met the other women participating in the official launch of Perkin’s newest venture, Women’s Strength Nation. They hailed from all over the country; many write for fitness magazines or high profile media outlets. Most were young, gorgeous, wore size 2 jeans and ran several marathons per year. I realized immediately I was out of my element, and my new bathing suit was not going to provide any comfort.

(BTW – the need to tote a bathing suit had nothing to do with San Diego’s beach, which we never even visited. That first night we were all urged to strip down to our suits in order to have front, back and side photos taken. These “before” mugshots would be used to benchmark our success.)

Most of the women were eager to pose—and why not—they looked like Sports Illustrated swim models! I reluctantly removed my clothes and posed against the white backdrop. Examining the photos a few moments later, I was appalled to discover fat rolls on my back. (Where did those come from? Are you sure that’s really my back?) That shameful image became my inspiration over the course of the weekend… and even now that I have returned. Every time I consider having a second serving of food (or anything that even resembles a muffin) I recall my profile and the craving dissipates.

The first evening we did a lot of sharing. Holly urged us not to compare ourselves to each other—we are all on different (yet similar) journeys. She encouraged us “to just show up,” emphasizing many times, “How you show up for this is how you show up for everything.” Holly’s Women’s Strength Nation workshops, which she hopes to host several times annually in Westins across the country, employ strength training as a metaphor. Holly, who has more than two decades of experience as a trainer, believes that lifting weights will not only change our physical bodies, but our emotional and spiritual selves, as well.  Game on!

We arose early and gathered in a meeting room. Unlike most hotel meeting rooms, this one lacked a table laden with enticing breakfast pastries and coffee. The workout started gently, with no indication of the agony that would come later. We lunged and lunged, and then lunged some more with exercise bands. When Holly promises to kick your butt, she is not kidding! The next day, I could barely walk down steps. But I felt happy that I was able to keep up without going into cardiac arrest.

Breakfast followed. Nutrition is a huge component of Holly’s program, and Westin’s SuperFoodsRx dishes (indicated on all property restaurant menus and available to all guests) feature foods designed to provide energy and nutrients. In addition to yogurt with fresh fruit and granola, hard boiled eggs and oatmeal, there were 2-oz. cups of fresh squeezed juice blends and smoothies. Alas, there were no hash browns in sight. Lunch and dinner menus were similarly healthy, featuring small portions of fish or chicken and piles of salad. The food at Westin’s Wellness Escape weekend taught me a good lesson about portion control. What I consider one serving is evidently enough to feed three girls (at least the type who wear size 2 jeans and train for marathons.)

Incidentally, my worry about bringing the proper workout wear was unnecessary, as Westin has partnered with New Balance to offer a unique gear lending program. For just $5 per day (much less than I spent on my ensemble), hotel guests can have a mesh bag containing a clean jersey, shorts, running shoes and socks delivered directly to their rooms. This is a great concept, as it gives business travelers more room in their suitcases for important garb such as stilettos, and eliminates the need to tote home sweaty workout wear.

In between workouts there was plenty of discussion. The perpetually perky Holly holds a B.S. in Exercise Physiology and Nutrition from Penn State University, and has the educational chops to back up the various workout systems she outlines in her new book, Women’s Health Lift to Get Lean (Rodale Inc., 2015). The inspiring book details Holly’s personal epiphany that caused her to transform her own body as she approached 40 years of age (she is now 43), and offers detailed instructions on how women can achieve similarly lean, toned, muscular yet feminine physiques. Her ambitious vision is to improve the ratio of women to men strength training in gyms around the world.

Holly believes strength training (don’t call it weight lifting, pumping iron or bulking up) improves bone health, reduces heart disease and hypertension, elevates mood and balances hormones. “It is as important as pap smears and brushing your teeth,” she states.

After this weekend, I am inclined to agree. But how am I going to find time to go to the gym when I work a 40+ hour week, and have a 1.5 hour daily commute? “Don’t make excuses,” Holly warns. “Our president exercises every day, and I’m sure he is busier than any of us.”

I am pumped and motivated to keep my strength training program going. But I realize that my Westin Wellness Escape weekend turned out to be about a lot more than exercise. It was about validation, empowerment and building a community of like-minded women. We were encouraged to grow and stretch in all kinds of ways—and prodded to challenge (and change) the ingrained thoughts and behaviors that prevent us from being the best we can be. It helped me hit the reset button on the way I eat, and it served as an eye opener— especially about those fat rolls on my back.