Tips from one of the world’s most influential scientific minds

“Don’t be passive. Be deliberately active. Not just going for a jog.”

Think self-help books are a phenomenon of our age? In the late 1930s, Napoleon Hill wrote one of the 10 best-selling books in this genre of all time, Think and Grow Rich. In it, he preached that optimism and hope were among the chief enablers of success.

That life hack became known by the acronym PMA, for “positive mental attitude.” It was a marching order for armies of men (for that’s who went off to work while June Cleaver, in her single strand of pearls, remained on the home front, the perfect helpmate) in gray flannel suits.

Today, PMA is a term we don’t hear much anymore, but was there ever a time in our lives when optimism and hope were more needed? And recent science has weighed in to reveal the power of the mind to affect health outcomes and performance. Studies have now verified that people with PMA have a much higher rate of survival and recovery from cancer and other serious disease. Maintaining a positive attitude has been shown to be a key differentiator separating major league baseball players from those in the minor leagues.

Anyone familiar with New Age practices will recognize that PMA is a kissing cousin to affirmations, a self-help strategy used to promote self-confidence and belief in your own abilities. “Regular repetition of affirming statements about yourself can encourage your brain to take these positive affirmations as fact. When you truly believe you can do something, your actions often follow,” states the website Healthline. Have you ever visualized acing a job interview or perfectly delivering a speech—and then doing it?

Mental health professionals can be a little skeptical of self-help formulas. So, we asked one of the World’s Most Influential Scientific Minds what he recommends for getting through these uber-challenging times. Dr. Roger McIntyre is a professor of psychiatry and pharmacology at University of Toronto, and he was honored with that distinction for four years in a row by Clarivate Analytics/Thomson Reuters.

“As a psychiatrist and researcher in brain health, a lot of self-help approaches feel superficial,” he says. To combat these past nine months—what he characterizes as a “triple threat of health, economic and mental health crises”—he points to research that indicates that the best things we can do to feel good about ourselves and our future is keep moving and keep to a routine.

“We try to find ways to reframe the situation,” Dr. McIntyre continues. “Rather than ruminating on the negative, the apocalypse, the helplessness, we distract patients. Then two things happen. They spend less time in rumination and more time doing things that may prove helpful.”

What kinds of things? “People who are maintaining a structured, active way of life, including exercise, portion control, not just on drugs but also on social media—no more than three to five hours a day—those individuals report much lower levels of anxiety and depression. Before COVID, we didn’t have a reason to think about these things. After COVID, we need to think about those things. Structuring your day is a very manageable situation.”

He also highly recommends “sharing the load”—having open and well-used lines of communication with your support group. “It can be family, friends, your place of worship, whoever,” he says.

Mental Health in the Meetings World 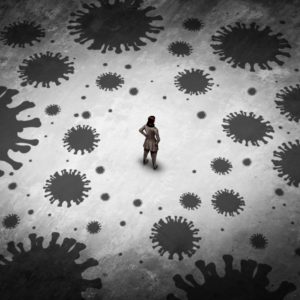 Dr. McIntyre acknowledges that those of us in the hospitality and meetings world are at particular risk as the pandemic drags on. “So many people make their livelihood from conferences, including people you don’t even think about, like the taxi driver and the sandwich shop next door to the convention center, there is now evidence that a rise in mental illness is starting to emerge in these populations,” he says.

“When people lose their job, it’s not only that they lose their paycheck and their health insurance—they also lose the sense of who they are,” he continues. “In the Great Recession, it was seen that males were at greater risk of suicide, because they generally define themselves more by their work, but woman can be at risk, too. What can you do? You need to redefine yourself. You need to pursue other avenues of interest and activities that are in your reach, to explore different aspects of who you are.

“Don’t be passive. Be deliberately active. Not just going for a jog. Pursuing other hobbies and interests that are a part of you, and retraining for other work, if necessary.”

And it can’t hurt to try staying positive while you do this.