While all meetings are different, one trait they share in common is that attendees often spend a lot of time seated. Dr. James Levine, a Mayo Clinic endocrinologist who has done extensive research on the dangers of inactivity, believes sitting is the new smoking.

After three decades of work funded by the National Institutes of Health, Levine has concluded that excessive sitting is responsible for many chronic health conditions, including obesity, diabetes, cancer and cardiovascular disease, as well as premature death.

Overall, we have become a seated society. “More than one-half of an average person’s day is spent being sedentary—sitting, watching television or working at a computer,” says Dr. David Alter, a cardiologist at Toronto Rehabilitation Institute who published a study in the Annals of Internal Medicine decrying the negative health effects of prolonged sitting.

The American Osteopathic Association estimates that more than 70 percent of office workers spend close to six hours per day glued to their chairs.

Why is Sitting So Bad?

According to the American Council on Exercise (ACE), prolonged sitting:

–Shortens the hip flexor muscles and limits the ability of the hip to extend, placing extra pressure on the lumbar spine.
–Makes you overweight; those who spend more than six hours per day seated are 2.5 times more likely to be obese.
–Causes tightness in the upper back and shoulders, and reduces oxygen flow to the lungs, especially when sitters slump.
–Elevates low-density lipoproteins (bad cholesterol) and increases the risk of high blood pressure.
–Lowers metabolism, increases free fatty acids and raises the risk of Type 2 diabetes.

ACE is taking a stand against sitting. It suggests that trimming sitting to less than three hours per day could give the average American an additional two years of life expectancy.

If you work in a corporate office where your derriere must be in a chair for a considerable period of time each day, try the following:

–Set a timer to regularly stand and move around.
–Schedule an office-wide stretching break.
–Stand when making phone calls and reading paperwork.
–If you have a question for a co-worker, stroll over to ask it in person rather than sending an email or making a phone call.
–If the office building has stairs, opt for them instead of the elevator.
–Send work to the printer that is farthest from your desk.
–When conferring with a small group, suggest a walking meeting outdoors.

Standing and treadmill desks have been touted as a viable solution for workers who sit too much. Although research indicates that they help build bone and muscle density, and users burn more calories using them, experts express caution.

“Sitting all day and standing all day are both bad for you,” says Alan Hedge, a professor in the Department of Design and Environment Analysis at Cornell University, who advises alternating between the two.

He warns that standing all day introduces a bevy of other health problems, including varicose veins and deep vein thrombosis, as well as foot, knee and lower back issues. Hedge recommends breaking up the work day into half-hour increments where you sit for 20, stand for eight and move around for two minutes.

Sitting is de rigueur at conferences. Make marathon meetings more bearable by getting attendees out of their seats between sessions. Here are some ideas:
For a small group, organize a short scavenger hunt that has participants racing through the venue or preferably, outdoors.
If the group is large, stage different fitness breakouts in different rooms; for example, yoga, dodgeball, stretching or dance.
Gamify movement by giving away branded trackers and staging challenges. Award prizes to those who take the most steps or cover the longest distance.

6 Exercises You Can Do at Your Desk

Place both hands on your desk and walk your feet back to a 45-degree angle. Strengthen your arms by performing a dozen push-ups.

Grab a heavy book, hold it behind your neck and lift it up in the air a dozen times. For an alternative exercise that works the triceps, turn so your desk is behind you. Extend your legs, bend your arms, and straighten up, being careful not to put stress on the elbow joint.

Improve posture and relieve upper back strain by pretending to insert a pencil between the shoulder blades. Squeeze and hold for 10 seconds. Repeat several times.

To strengthen your gluteal muscles and quadriceps, stand 6 inches from your desk, lower yourself into a seated position and then pop back up. Hold onto the desk if necessary. Repeat numerous times.

Stand with your feet together and rise up on your toes. Hold for 10 seconds, release and repeat. If you need to hold on to something, use your desk or a chair with the wheels locked.

Sitting in your chair, raise one leg at a time, holding it for 10 seconds before releasing it. This improves circulation and tones abdominal muscles.

Distract Yourself with Your April 2020 Smart Style

This month, we’re featuring products that serve as your first line of defense from coronavirus, bad posture, post-happy hour headaches and more.

Bounce Back Higher by Thinking Big

By Rosemarie Rossetti
New and Renovated

How to Support the Mental Health of Event Planners 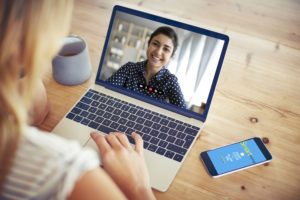