Back in the 1980s, when I first tried them, they were often referred to as Lily tanks—for John Lilly, a physician and neuroscientist who developed them in the 1950s to test the effects of sensory deprivation. Lilly was quite the frontier-pusher, and is also known for his experimentation in dolphin communication and psychedelic drugs. The 1980 movie Altered States featured actor William Hurt regressing to a simian form while dropping acid and spending extended periods in a Lilly tank.

Sounds a little out there, doesn’t it?

Cut to today. They’re called flotation tanks now. NBA superstar Steph Curry is a devoted user, and touts them for reducing muscle soreness and gaining mental focus (Google the YouTube videos and see for yourself). You will find float centers in major metro areas; more than 250 are scattered across the United States, according to Time, charging $50–$80 for an hour’s float. In Europe and Mexico, among other international destinations, they are increasingly common in hotel spas.

So, what are they exactly, and why should you try one? Picture a futuristic-looking capsule somewhat larger in dimensions than a luxury soaking tub. Lift the lid—it opens like a hatch on a boat—and inside you will see about a foot of water. Dissolved in that water, which is roughly the same temperature as your skin, is 850–1,500 pounds of Epsom salt. That makes the water incredibly buoyant.

That means you cannot sink. Soon thereafter you cannot see. When the lid is closed and a pale blue light fades, you see nothing and hear nothing except a soft ripple of water as you settle into your surroundings—and your own heartbeat. Some centers do offer meditative music options. At first, the womb-like nothingness can be alarming, particularly in this wired, 24/7 world we now share. A writer for Men’s Health described the sensation this way:

“I thought I had made a huge mistake. I felt anything but relaxed. All the reasons I was floating in the first place—the racing thoughts; the tense shoulders; the jittery, nervous feeling in the pit of my stomach—felt amplified. It took everything in me not to feel around in the darkness to find the light and float my way out of there.

“But the longer I stayed in the tank, the more things started to slow down. My shoulders loosened up. My breathing deepened. My thoughts stopped racing. I was relaxed. And it felt amazing.”

Justin Feinstein, a neuropsychologist who runs the Float Clinic and Research Center at Laureate Institute for Brain Research in Tulsa, Oklahoma, has scanned the brains of volunteers before and after they float. His research is in its early stages, but he is seeing that floating can be as effective in curbing anxiety as prescription drugs such as lorazepam (sold as Ativan) and meditation.

“A lot of epiphanies can happen in there,” says Kristi Beck, cofounder of Float, a float center in Sausalito, California. “It’s 60 minutes to unplug and organize your thoughts.”

Other touted benefits include faster recovery from injury, lowered blood pressure, pain relief, reduced swelling and a respite from insomnia. The profoundly relaxing experience is commonly referred to as Restricted Environmental Stimulation Therapy…REST. 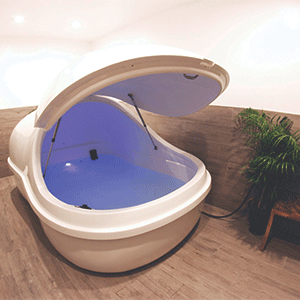 Float tanks have been around for more than a half-century. Their fans are many, and benefits seem to be evident. So, why aren’t they as common as, say, yoga studios? At fault may be a perceived “ick factor.”

Float tanks are small, enclosed and warm. Could they be incubators of germs, viruses and other nasties?

In a word, no. Or not likely. The extreme salinity of the float water is inherently inhospitable to bacteria, viruses and other pathogens.

Moreover, float tank water is typically sterilized between sessions, and surfaces are disinfected. Ask for specifics at the float center.

In 2021, the global wellness industry’s estimated worth was $4.5 trillion and is projected to continue a 5-10% increase year-over-year, culminating in a worth of $9 trillion by 2040. Lacey Matsumoto, Four Seasons Resort Lanai’s new spa director for its Hawanawana Spa, is seeing the impact first hand.