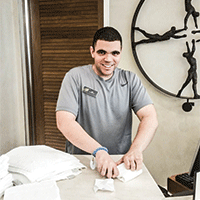 Sin City is known for singers, dancers, magicians, card deal ers, celebrity chefs and Elvis impersonators, but the real stars of The Strip keep a lower profile. The next time you pump iron at Bellagio Las Vegas for a meeting, you might be greeted by the friendly face of Paul Brooks (pictured right), a gym attendant at the hotel’s fitness center. He is part of the Best Buddies Jobs program.

MGM Resorts International joined forces with the nonprofit Jobs initiative in 2014 to employ individuals with intellectual disabilities, such as Down syndrome, autism, cerebral palsy and traumatic brain injury. They work in spas, gyms, pools, culinary areas and at the front desk. The resort’s accounting department may soon join the list.

Referring to Brooks as “one of our shining stars,” Dominique Ianni, director of operations for Best Buddies Nevada, tells Smart Meetings Brooks was honored with the Jobs Program Participant of the Year Award for his stellar service at the 2016 Best Buddies International Leadership Conference.

Best Buddies International, a Miami-based nonprofit organization founded by Anthony K. Shriver in 1989, has expanded to worldwide outreach in more than 50 countries. Shriver and Jim Murren, chairman and CEO of MGM Resorts International, “put their heads together… about their desire to really embrace inclusion,” Ianni says. This program seeks to provide opportunities for people with intellectual disabilities to make competitive wages with benefits, and squash the perception that they are capable only of being “grocery baggers.”

The Search for Superstars

Across the country in Leesburg, Virginia, The National Conference Center paired up with Loudoun County Public School System and the nonprofit organization Didlake for a similar program, Project Search, to help people with intellectual delays transition from high school to the real world. Participants take part in a 10-month internship to learn various areas of hospitality through classes and hands-on training.

“We placed our nine interns in a variety of departments, including culinary, engineering, housekeeping, audiovisual, grounds and event services,” says Geoff Lawson, vice president and general manager for The National, regarding the program’s first graduating class in June. Three of the participants were hired by the conference center upon completion of their internships and a new group of students have since enrolled in training.

Every October, the U.S. Department of Labor’s Office of Disability Employment Policy promotes National Disability Employment Awareness Month (NDEAM), which has existed in some form since its inception in 1945. “Each day, millions of Americans with disabilities go to work and know firsthand the independence, pride and sense of community that comes with a job,” said U.S. Secretary of Labor Alexander Acosta. “Their daily contributions are proof that inclusion helps drive American innovation.”

Give a Voice to the Cause

Meeting professionals interested in shining light on this issue can contact the Special Olympics speakers bureau to book a representative experienced in delivering inspirational keynote addresses. Every four years, select athletes are appointed to represent the organization as Sargent Shriver International Global Messengers at speaking engagements worldwide. Additionally, the board of directors, which consists of business and sports leaders, pro athletes, educators and experts, as well as CEO Mary Davis and Chairman Tim Shriver, are also available for booking. 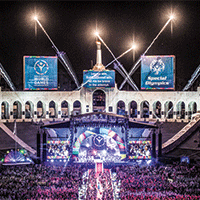 Los Angeles notes a positive correlation between hosting the Special Olympics World Games in Summer 2015 (pictured right) and an uptick in tourism. The event attracted more than 7,000 athletes, 3,000 coaches, 40,000 volunteers and more than a half-million spectators representing 177 countries and 27 sports. Considered the largest event in the city since the 1984 Summer Olympics, it had a $400 million economic impact on the region.

“The Los Angeles community is eternally grateful for the opportunity of hosting the 2015 Special Olympics World Summer Games—the world’s largest sports and humanitarian event—and is incredibly proud to have provided the stage that celebrated the spirit, courage, talents and achievements of people with intellectual disabilities from every corner of the globe,” says Kathryn Schloessman, president of Los Angeles Sports & Entertainment Commission.

The 2028 Summer Olympics and Paralympics will also take place in the City of Angels. Many of the same venues and facilities used during the Special Olympics—including Los Angeles Coliseum (pictured)— will also be utilized in 2028. In conjunction with University of California, Riverside and Beacon Economics, the LA2028 bid committee conducted a study that projects the 2028 Games will contribute $11 billion to Los Angeles’ economy. They predict more than 1 million visitors and about 3 million attendees, including locals.