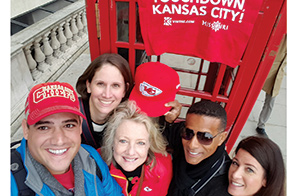 Instead of a selfie, I chose a “groupie” from our recent trip to London to support the Kansas City Chiefs’ international appearance—and our priority for teamwork. Kansas City’s passion for sports will leave you cheering. Witness the action and enjoy professional football, baseball, soccer and racing. Or tour The College Basketball Experience and the Negro Leagues Baseball Museum, two interactive venues fit for the fan in all of us. No wonder Travel & Leisure named Kansas City one of America’s Top Cities for Sports-Crazed Fans.
–Ronnie Burt, president and CEO 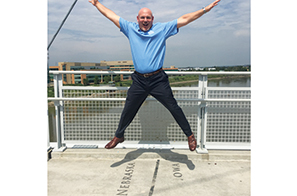 This is me “Bobbing.” What is Bobbing, you ask? It’s when you strike a pose while standing (or jumping) in two states at the same time—trust me, it’s a thing. Omaha is home to the Bob Kerrey pedestrian bridge (locals call him Bob). Bob is a one-of-a-kind 3,000-foot suspension bridge that connects Nebraska and Iowa, and the state line runs right through him. Bob is suspended in air, and many attendees who have walked, biked or attended an event on Bob swear they can feel him sway. Bob is a Libra, so he’s well balanced and his towers are taller than the Leaning Tower of Pisa. Bob has a larger-than-life personality and shares his unique perspective via his Twitter and Instagram accounts (@BobTBridge).
–Keith Backsen, executive director and president 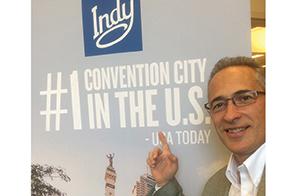 It’s not in our nature to boast, but USA Today named Indianapolis the No. 1 convention city in the United States, and we agree. This city was literally designed for events, and our welcoming nature has earned a name—Hoosier hospitality. What surprises convention planners and attendees when they arrive are the incredible restaurants, attractions and green spaces throughout the city. One of them is Monument Circle, the spiritual and iconic heart of Indy, and a great gathering place to relax at an outdoor cafe, practice yoga or get an eagle-eye view from atop the Soldiers & Sailors Monument.
–Daren Kingi, senior vice president of sales 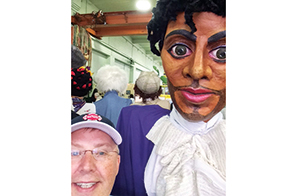 Having fun at the Austin, MN ArtWorks Festival. This is an annual festival that brings in thousands of people. It started from the ArtWorks Center, which is a great place to host a meeting.
–Craig Clark, city administrator 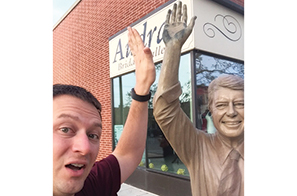 How cool would it be to meet a president of the United States? In Rapid City, South Dakota, you can do big things like stand face to face with every single president. Saddle up with Calvin Coolidge, take a load off your feet with Martin Van Buren or high-five Jimmy Carter, like Rapid City CVB Manager of Conventions Sales Tyson Steiger. Visitors to historic downtown Rapid City are greeted by the City of Presidents, a series of life-size bronze statues of our nation’s past presidents along the city’s streets and sidewalks. Whether you’re enjoying downtown shopping, dining or other attractions, you can enjoy these sculptures free of charge or break the ice by doing a fun team-building scavenger hunt with them.
–Tyson Steiger, manager of convention sales 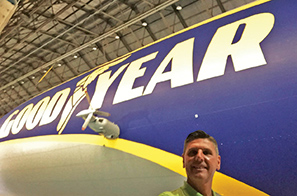 For the Rubber Capital of the World, nothing is more iconic than the Goodyear Blimp. While many have seen these blimps on television, Greater Akron, Ohio, is home to Goodyear Tire & Rubber Company’s world headquarters, and the blimps can often be seen hovering above the town. The company’s previous headquarters have been transformed into Akron’s newest entertainment district, The East End, which includes two theaters, meetings and office space, and living space.
–Dirk Breiding, vice president of sales