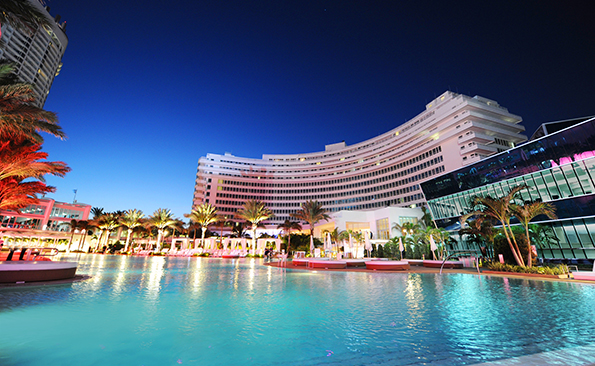 With 20 different properties making the cut, Florida has solidified its position as a prime meeting destination according to a recent survey by Cvent, which prepares an annual list of the Top 100 Hotels for meetings in the United States.

Results of the survey, released Jan. 13, show that while The Sunshine State has the highest number of properties listed, only one, Fontainebleau Miami Beach, made it into the Top 10. Las Vegas, which features nine hotels on the Top 100 list, has three properties listed among the Top 10. Las Vegas’ ARIA Resort & Casino, in fact, claimed the top spot nationwide. The Venetian and Palazzo Resort, Hotel & Casino in Las Vegas was No. 3, and The Cosmopolitan of Las Vegas, Autograph Collection placed 10th.

Texas, the Lone Star State, boasts 10 hotel properties on the list, including two in the Top 10 (Gaylord Texan Resort & Convention Center in Grapevine, and Hilton Anatole in Dallas). Up and coming Nashville also has two properties in the Top 10: Gaylord Opryland Resort & Convention Center earned the No. 2 spot, while Omni Nashville Hotel, which is new to the list, grabbed No.  4.

Marriott Hotels had the most properties on the list, with 24, however other major chains such as Hilton, Hyatt and Sheraton were also well represented.

Bharet Malhotra, senior vice president of sales for the Cvent Supplier Network, notes that this year’s list has a number of changes throughout the Top 100, including 18 new properties that knocked some off of last year’s list. New properties that made the 2015 list include Renaissance Nashville Hotel, Marriott Marquis Washington, DC, The Phoenician in Scottsdale, Arizona, and Sheraton New York Times Square Hotel in New York City.

Smart Meetings dropped in on several industry professionals to see what methods and strategies they’ve implemented to adjust to the sudden return of travelers and deliver the service levels expected by attendees.

Meet Up with Churchill