What can event professionals learn from participants in a 48-hour filmmaking challenge in a luxury hotel in Vancouver, British Columbia? Crafting compelling movies and planning meaningful events both require a lot of the same skills sets—storytelling, creativity and dedication. Smart Meetings went behind the scenes at a two-day competition with four teams of up-and-coming filmmakers inspired by randomly assigned spaces in The Douglas, an Autograph Collection Hotel and the adjoining JW Marriott Parq Vancouver.

Following are some of the lessons learned that event professionals can focus on to take their event journey to the next level.

Go Where the Talent Lives 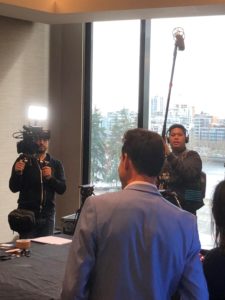 It was only natural that the challenge was held in the third-largest filmmaking destination in North America, explained David Shepheard, Vancouver Film commissioner and one of the judges of the competition. Vancouver has become known as Hollywood of the North. The concentration of special effects talent is a resource for event professionals looking to add wow to a meeting.

Speakers from Industrial Light and Magic, which produced special effects for Star Wars and Harry Potter movies, and EA Sports, which has 2,000 people bringing gaming to life, live and work in British Columbia. “A film town like Vancouver can help make something ordinary into something more special,” Shepheard said.

Form Your Own Dream Team

Each team recruited a writer, director, producer and videographer. Over the course of the challenge, each of the different roles had its own deadlines and curve balls to field—decisions about equipment to “purchase” using the $2,000 budget allowed, talent to “hire” and ways to incorporate required elements (any ideas for riveting plot twists involving maple syrup?).

Planners face similar choices on the fly. When they evaluate sourcing a property, they are looking beyond the physical space to the team that will be working with them to come up with creative solutions. Planners often have a dream team of suppliers, audiovisual experts, linen companies and speaker sources who have proven that they can deliver even when challenges arise at the last minute.

More: Lessons from NOLA: Storytelling in the Meetings Industry

As Director Christian Mejia from the short film competition calling itself Team Pineapple said, “For both moviemaking and meeting planning, you have to have a final vision, a great team, good communication and a flexible attitude.”

For Marriott’s Convention and Resort Network (CRN), that means 100 properties designed for large groups with staff trained in accommodating the special needs of conferences and events. These people do more than take orders: They act as partners, building on ideas, coming up with new solutions and suggesting the unexpected.

“We like to collaborate,” said Amy Popper, senior marketing manager at Marriott’s CRN. “It is fun for us when planner partners want to completely transform a room. Instead of thinking theater style or classroom, we think art gallery or office? We love creating special meeting moments.”

That love of being challenged was echoed by Amy Ballard, director of sales and marketing for both properties in Parq Vancouver. “Hotels have very interesting spaces outside the traditional meeting space,” she volunteered. “Ask your partners to show them atypical spaces, such as suites, hidden corners and outdoor spaces. Let’s start creating spaces that surprise and delight attendees.” 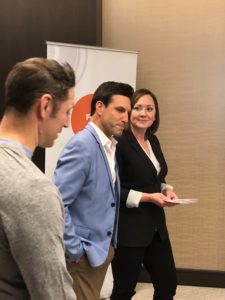 Veteran event professionals know that expecting the unexpected is a way of life. You can plan and create spreadsheets and tabbed binders all you want, but on the day of the conference, someone’s flight is going to be delayed or a speaker will call in sick. The same is true in a filmmaking challenge. Sure enough, one team was delayed coming into town from Los Angeles and had to make up time when it arrived.

In the end, planners and producers often have to work with what they have, rather than what they wish they had. In this case, the teams were randomly assigned rooms for their scenes—a meeting room turned into an art gallery using items repurposed from other parts of the hotel, a penthouse suite with a literary den theme or a hotel room. However, they quickly learned that what they were given had much more to offer than might originally have appeared.

Team Cinema Roll, which won the competition with a 10-minute piece they called “Nut Job,” credited a love of making stories for their success. Will Osland, the team’s writer said, “You have to love the scramble.”

Mejia added this nugget of wisdom: “Be calm; you also have to enjoy it.”

In an effort to keep Indigenous traditions alive in Canada, annual ceremonies and historical sites are replete, but there are also plenty of enlightening experiences for groups to engage in, as well as hotel properties and venues currently owned and operated by First Nation tribes.