“A cloistered world unto itself,” is how The Brazilian Court Hotel describes itself, “with lush gardens and a tropical ambience.” That’s exactly the case for its courtyard, enclosed by a thick wall of vegetation; its pool, hidden away within the hotel’s maze; and its guests, who can relax, indulge and unwind in peaceful privacy indoors and out. 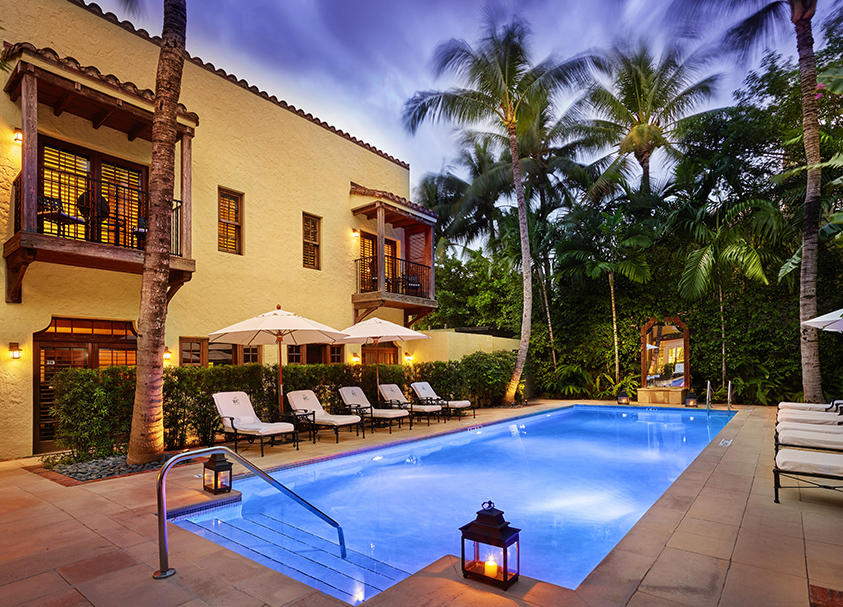 A destination for the famed and wealthy, The Brazilian Court has hosted names including Greta Garbo, Amelia Hearst and Gary Cooper, and even served as a guest house for the Kennedys. Now into its 90th year, the hotel continues to host some of the most affluent guests (actress Sophia Vergara held her rehearsal dinner in the fall in the courtyard in front of Café Boulud) and offers a one-of-a-kind, European old-world luxury experience. 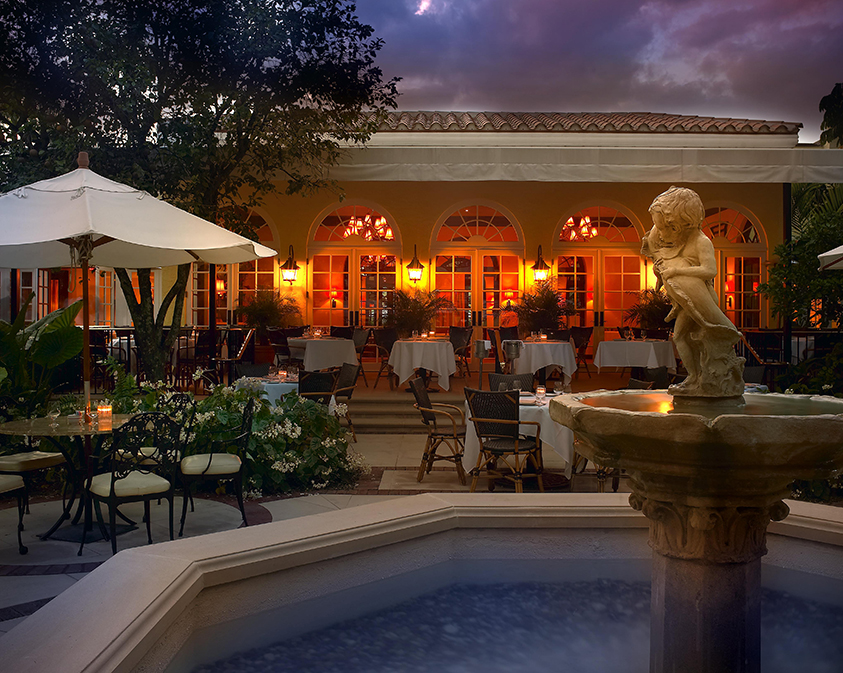 Looking onto the Cafe Boulud terrace from the courtyard

The hotel offers 3,000 sq. ft. executive meeting space, perfect for smaller incentive groups and board meetings with onsite dining from Cafe Boulud. The Ballroom and Conservatory were renovated in 2015 to allow lots of natural light into the beautiful meeting space. 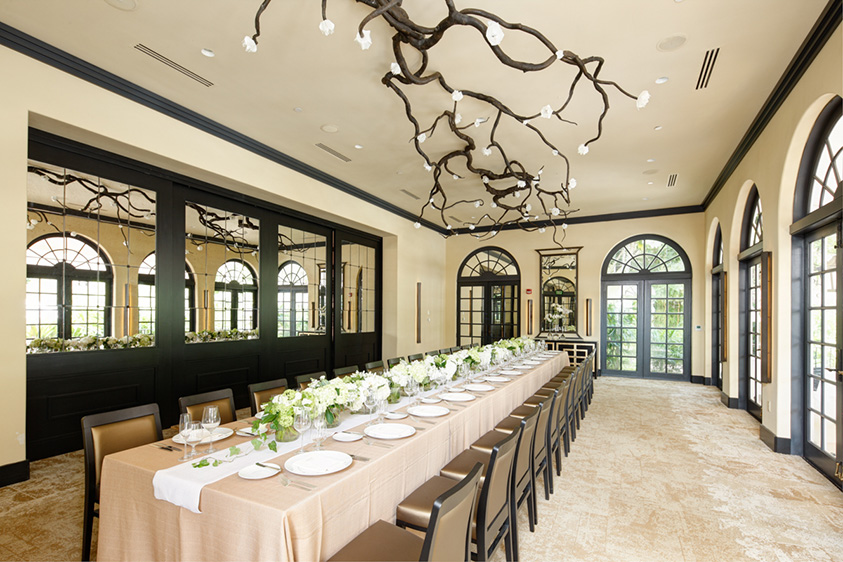 The 1,150-square-foot ballroom boasts a dramatic glass skylight. The 720-square-foot Conservatory seats up to 150 for intimate, glamorous receptions. 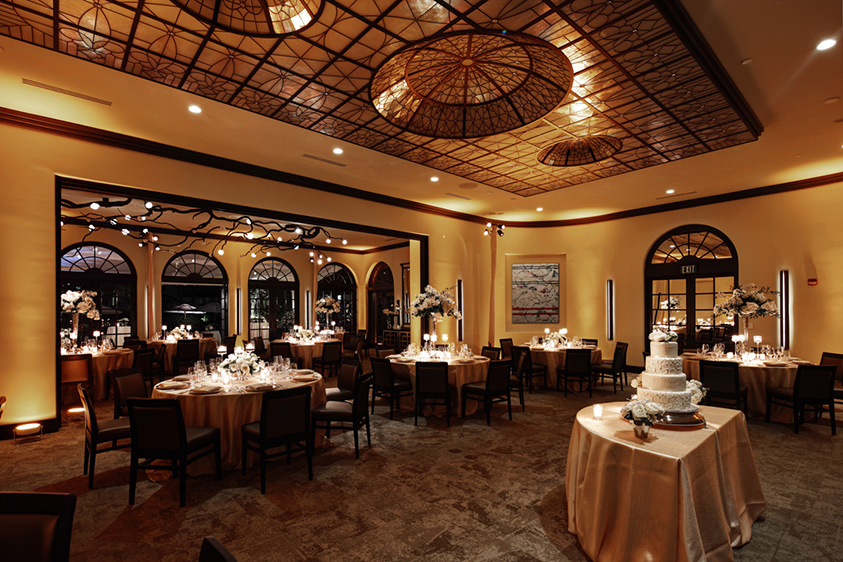 The Ballroom and Conservatory

Located in what is known as America’s Riviera, tucked away in Palm Beach, the hotel is steps away from some of the finest shopping and galleries, as well as the beach.

The town itself is full of rich history. It’s self-proclaimed as America’s first resort destination, founded in 1911 by Standard Oil co-founder Henry Flagler, and is the birthplace of Mediterranean-revival architecture. 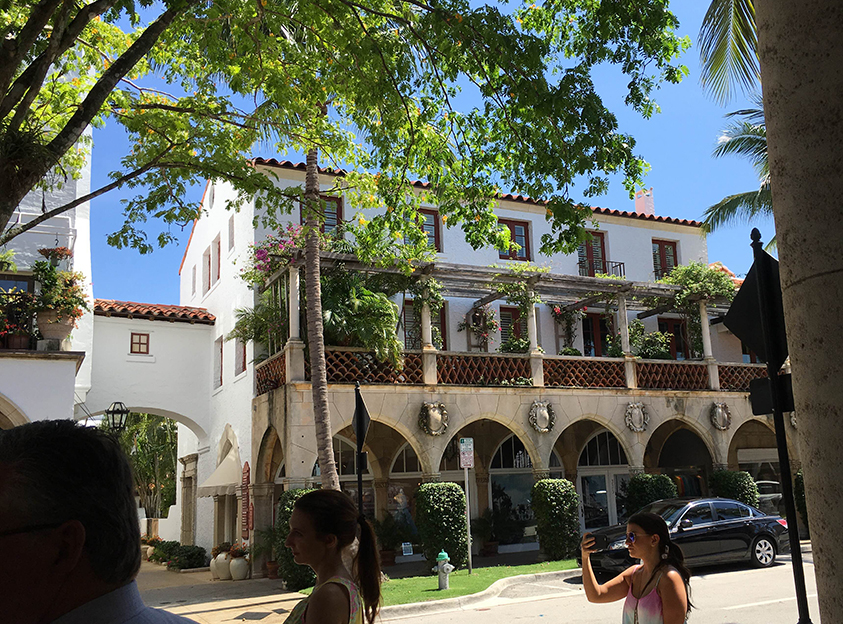 Exploring the architecture during a walking tour of Palm Beach

Worth Ave. offers some of the finest shopping—of both luxury brands and local boutiques, and is where Gucci truly got his start, hosting fashion shows right in front of his store, according to local tour guide Rick Rose. Nearby is the Everglades Club—the epitome of Mediterranean eclecticism, with 22 different window treatments. It began as a highly exclusive club and continues to be to this day, with private golf, tennis and croquet.

One mile from The Brazilian Court is the stunning Gilded-Age mansion built by Flagler  for his third wife; the gargantuan property now serves as the Flagler Museum, hosting tours, weddings and events in its expansive ballrooms and pavilion. The 4,800-square-foot Grand Hall hosts elegant receptions and dinners. 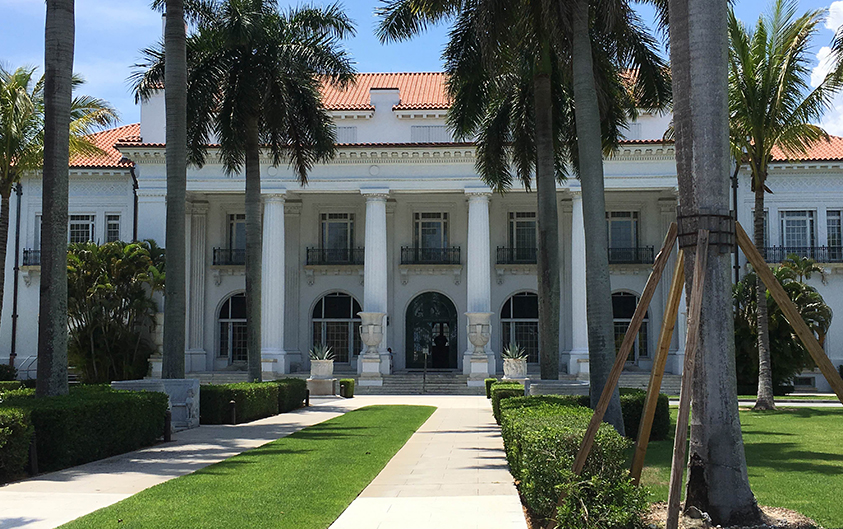 Flagler Museum, also known as Whitehall, is a 55-room mansion

Much of the museum’s décor is original to the 1902 home, such as wall coverings, carpets, china dishware, and enormous crystal chandeliers. 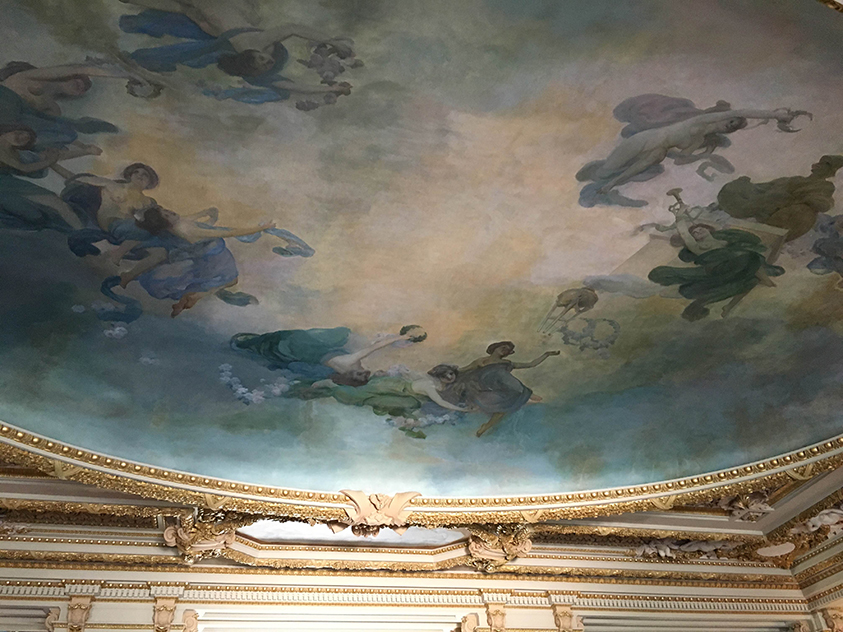 Behind the home, the Flagler Kenan Pavilion, built in 2005, houses his private railcar from 1886. The airy pavilion boasts floor-to-ceiling windows looking out onto the water and can host large events. Outside is a sprawling coconut grove. 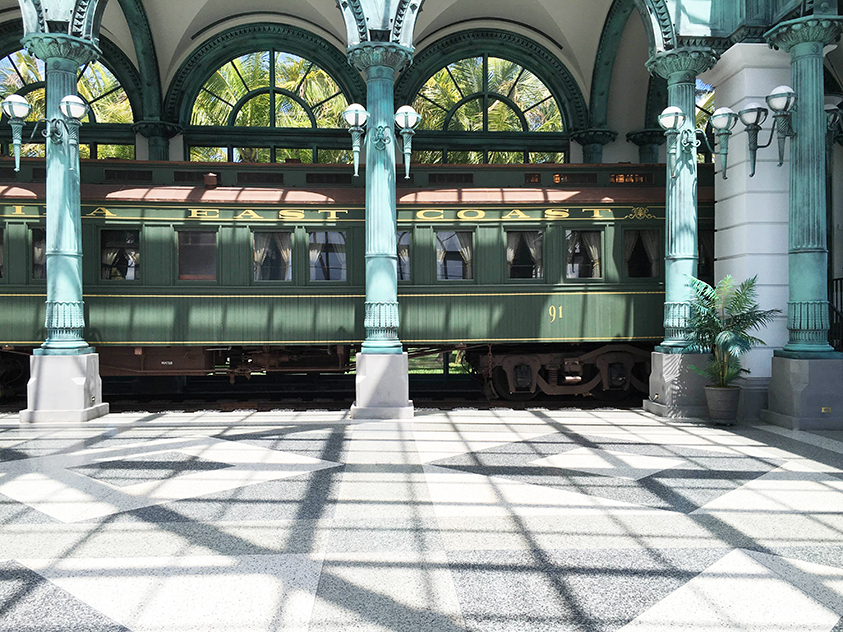 The two buildings are connected by a covered walkway

Located across the street from Raymond F. Kravis Center for the Performing Arts, West Palm Beach Marriott, and CityPlace shopping plaza (offering 90 restaurants and shops), the area is walkable, and a complimentary trolley runs throughout the downtown neighborhood, making it a seamless meeting destination, and what director of group sales Kelly Cavers calls a “community-activated experience”–one in which attendees can see the Palm Beaches like locals by eating, shopping and commuting like locals.

The convention center itself is also extremely walkable, with 19 breakout meeting rooms totaling 21,000 sq. ft, a 22,000-square-foot contemporary ballroom, a 100,000-square-foot exhibit hall that can be divided evenly into two spaces, and airy boardroom with an outdoor patio and incredible view overlooking the exhibit hall floor. 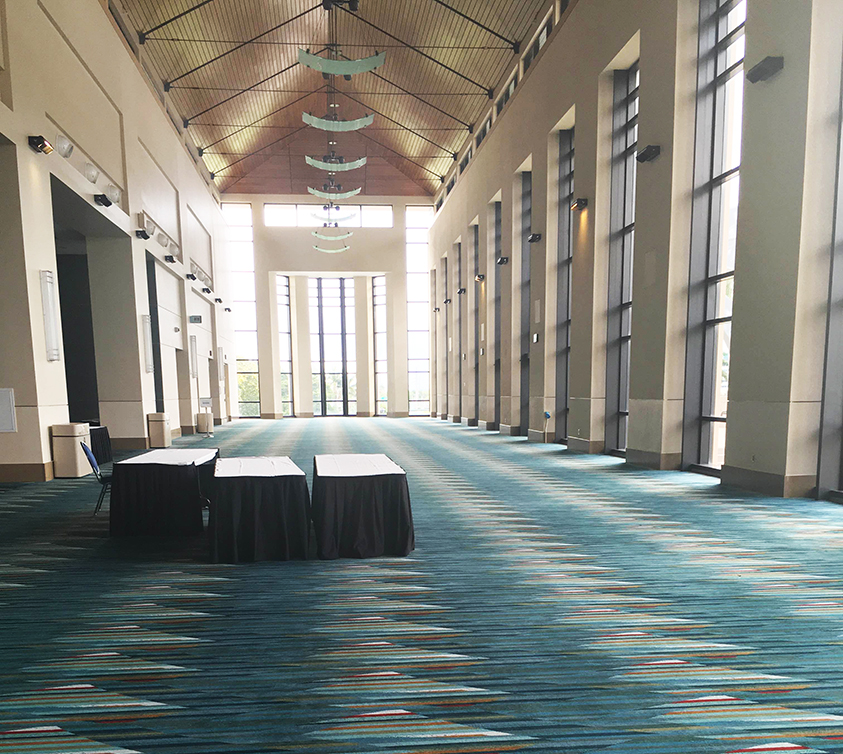 Floor to ceiling windows allow light into the prefunction space

Designed to resemble a ship, the 13-year-old convention center features high Brazilian mahogany wooden plank ceilings over the 10,000-square-foot prefunction space and sea-blue carpets throughout. The expansive 7,800-square-foot kitchen is home to award-winning chef Mark Aleks, whose cuisine is nothing you’d expect from convention center catering, which is one of many reasons Cavers calls it a true unconvention center.

In July, renovations will start on what will be an energy-efficient seating area outside the convention center, featuring a solar brick patio and solar seating. The center is also currently undergoing renovations that will nearly double the parking and provide ample room for marshaling tradeshow equipment.

“We don’t want it to be a hidden gem anymore,” says  Cavers. And with the growing conversion rates for groups booking the hotel and convention center, it’s safe to say the secret’s out. Groups looking for a new place to meet have found one.

A covered walkway leads directly to the meeting spaces in the 400-room Hilton West Palm Beach, which opened in January (just 23 steps from A to B, Hilton West Palm Beach General Manager John Parkinson says). The hotel offers 24,000 sq. ft. of meeting space among its two ballrooms and six meeting rooms., plus two additional 2,400 -square-foot lawn spaces for outdoor events. 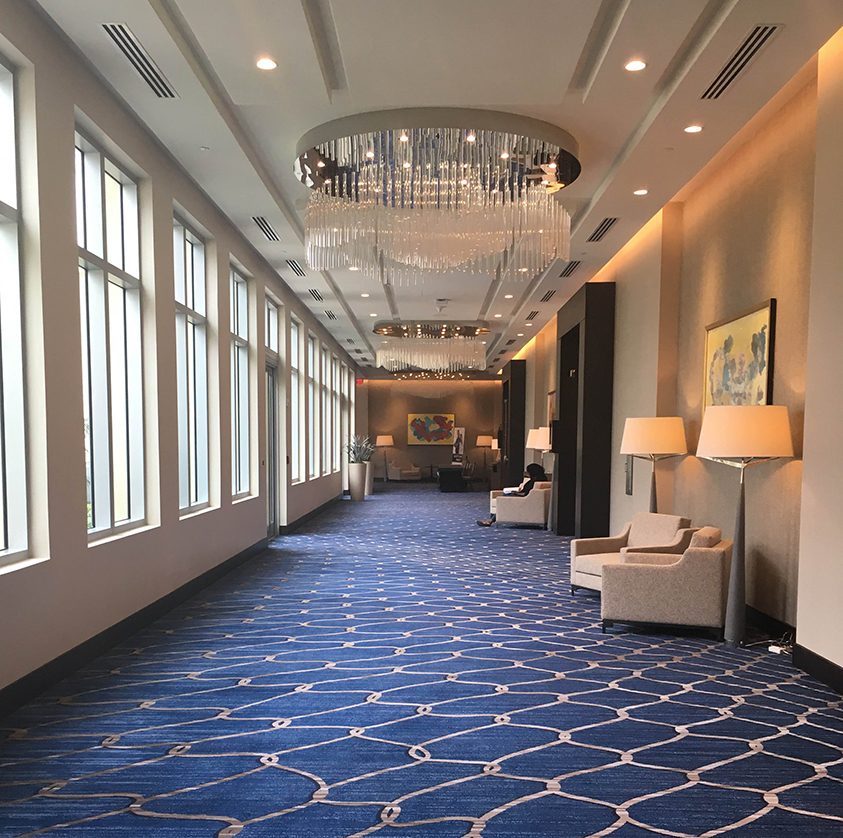 Two restaurants overlook a vast resort-style infinity pool, where guests can lounge under brightly-colored canopies and cabanas and sip cocktails near the fire pit.

From the moment guests walk into the hotel, they can see straight through the glimmering lobby to the pool and adjoining convention center. 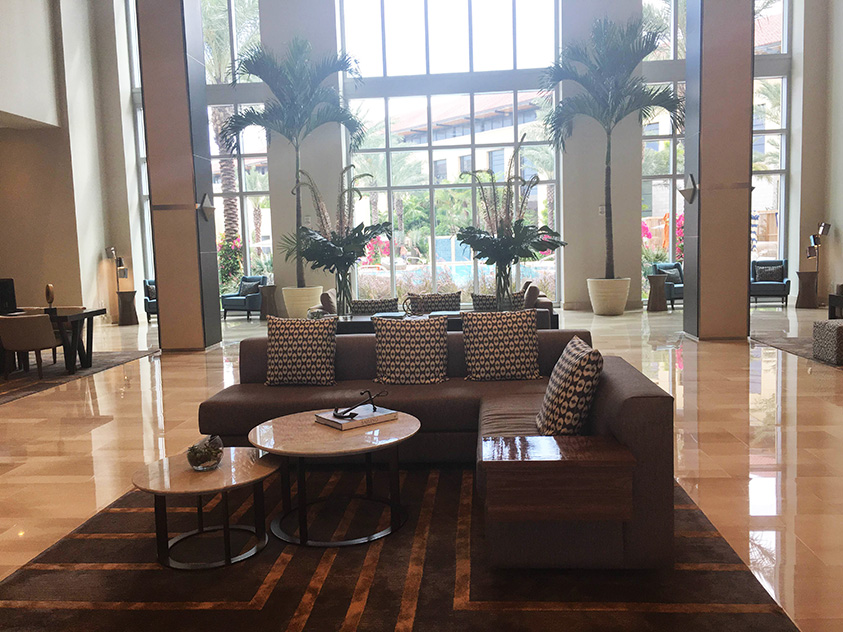 See more photos of all three properties on the below Twitter feed from @SmartMtgsRaine.

Smart Meetings dropped in on several industry professionals to see what methods and strategies they’ve implemented to adjust to the sudden return of travelers and deliver the service levels expected by attendees.

Meet Up with Churchill