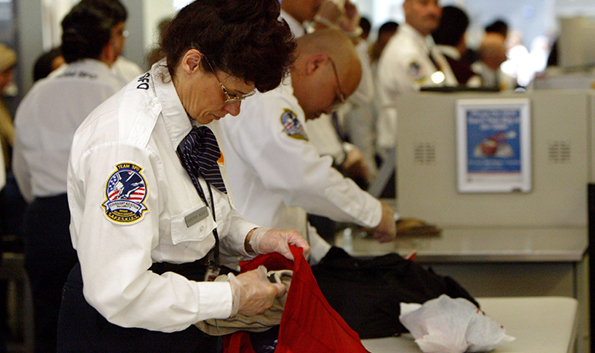 It happens every day, in airports all across the country. Transportation Security Administration officers inform innocent travelers that their nail polish remover, souvenir Yankees baseball bat or the decorative knife they used to cut their wedding cake is prohibited in carry-on luggage. Although the passenger could ostensibly return to the ticketing counter and check the item, or mail it to themselves from an airport postal station, most don’t. After some initial grumbling, they willingly surrender the article(s).

Then there are the travelers who accidently leave their cell phones, driver’s licenses or watches behind after making their way through a busy TSA line. In a rush to catch their flights, they may not have time to go back and retrieve their lost item(s), or they may not even realize they are missing their glasses until they are in the air, hunting for their bifocals.

Travel writer Andrea Sachs discovered that every day, TSA employees at 450 airports across the nation amass 150 lbs. of banned/ forgotten goods —double that amount on holidays. In a fascinating article published in The Washington Post, Sachs traced the fate of forbidden and forgotten items.

When it comes to very personal possessions such as keys, hearing aids and dentures, TSA strives hard to return the articles to their rightful owners. The agency stresses that it is a big help when travelers attach business cards or contact info to their property, especially computers.  But what does TSA do with the rest of the loot?

According to Sachs, firearms and illegal substances are immediately turned over to local law enforcement. Liquids are sorted; water and similar beverages are tossed away, while flammable or potentially hazardous materials such as bleach or hairspray are transferred to receptacles and hauled away. The remainder of the stash is carefully inventoried and stored in the hope that it will be claimed. Travelers can recover missing property by contacting TSA’s lost-and-found office at the departing airport. The claimed item(s) will either be set it aside for pick-up, or shipped back to passengers at their own expense.

However, thousands of pounds of abandoned property are never claimed. After languishing for several months this inventory is either sold online, or finds its way to one of several State Surplus Distribution Centers where it is liquidated at about half its retail value. At one such center, for example, a pipe wrench that sells for $90 in a home improvement store could be scooped up for $50. Sachs found that savvy shoppers could purchase anything from hunting knives, letter openers and belts—to snow globes, rolling pins and blenders. There were hockey sticks, power drills, gardening trowels, corkscrews, water pistols and frying pans—all surrendered to TSA officers, and never claimed.

The government does not want to be in the resale business. Although it puts a lot of effort into reuniting passengers with their possessions, TSA would prefer that travelers educate themselves before leaving for the airport. It points out that many items prohibited in carry-on bags are permitted in checked luggage. It has also created an online tool and app called “When I Fly, Can I Bring . . .?” that addresses more than 3,500 individual items.

The agents themselves, who never keep any of the confiscated items, post their more unusual finds on the agency’s Twitter and Instagram pages. Some of the more unusual finds include a comb with a concealed blade, a gun sewn into a teddy bear, and a rusty sickle.