When members of the Smartie community reach out with an idea, we listen. So, when Megan Finnell, director of meetings and conferences with MGMA, pinged me with an invitation to join Clubhouse, I jumped on it.

For those who haven’t had a chance to sit in on some of these high-energy conversations on what is billed as a drop-in audio chat social media platform, the iPhone-only, invitation-only feed seems to be popping up everywhere, including an exclusive announcement from Elon Musk about Dogecoin (another cryptocurrency for those not yet in the know). It now numbers more than 2 million members, and that FOMO while you wait for an invitation is only part of the appeal.

The good news is, no silly TikTok dance videos or Bernie mitten memes.

Like an in-person event, the quality of the content is as good as the people in the room. Rooms are formed based on topics listed in the “corridor” of the app feed and sent out in push notifications to those who follow topics or members. Speakers are “on stage” in the top part of the screen and audience members below can raise their hands to be called up to share their expertise or ask questions. Moderators keep the conversation moving.

When I saw a notice for a room opening up called “CH Cage Fight Live Events vs. Hybrid” featuring Smart Meetings Planners of the Year Timothy Simpson (brand and engagement chief strategist for Design Studio by Maritz Global Events) and Elizabeth Sage (associate director of events and trade shows with Illumina), I had to listen in.

Michael Greto, founder of The Chatt Hill Company in Atlanta, who was one of the moderators for the session, explained later that the ability to hear the nuance and tonality in people’s voices makes it a far better platform for connecting than text-based Twitter or Facebook.

“People are more vulnerable, and there is immense breadth and depth of information being shared here,” he said. He suggests that newcomers (who are designated with a celebratory hat on their avatar) start by listening to learn. “You don’t have to be the loudest voice. Don’t be afraid to ask a question,” he said. 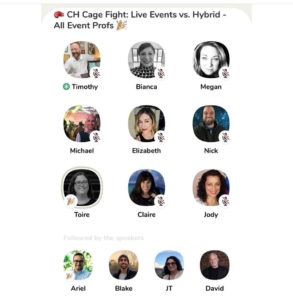 Similarly, Rachael Green, who bills herself as a virtual mixologist and hosts “Rach Green Cocktails” for interactive streaming sessions, has fully embraced the platform. She received her invitation just before Christmas and now spends six to nine hours a day there. It has become her sole avenue for research, sales, marketing and networking. “It is the most influential platform for moving the needle because it is based on conversation,” she said.

“As you build your tribe, you can find people aligned with your interests. It creates a sense of family,” she explained.

Green called the platform a natural fit for meeting professionals and compared it to a convention center with many events inside. Planners design an event by creating a room, choosing a compelling topic, inviting interesting speakers, moderating the discussion and calling people up on stage.

“It has the value of podcasts, but with the added benefit that you can listen passively or raise your hand and join the conversation,” she said.

In the session I attended, speakers were assigned “pro virtual” or “pro in-person” positions and asked to argue their side to the death. One of the “fighters,” Nick Borelli, who is the new director of marketing growth with Allseated, joked afterward that the cage fight turned into more of a love fest as everyone agreed we just want to get back to meeting in person.

Until then, we have Clubhouse. Now, when I am “doomscrolling” and see the notification about a planner talk pop up on my phone, I almost always click, even if I only have time to listen in for a moment before poking my head into the next room.

UK-based event manager and speaker Juliet Tripp explained in a blog post what she learned in her first 24 hours on the platform she thinks could replace those “water cooler moments” in the work world.

To start, she suggested putting some thought into a bio and picture that represent who you are and coming up with an elevator pitch quickly so you can explain your product or service when called. Following people will unlock more conversations and rooms. Tripp also advised experimenting with different times of day to check out what happens across different time zones.

“Say yes, figure it out later! To speak, to host a room and moderate—dive straight in and get involved,” she urged. Then champion others by giving them a shout out or invite them up on stage.

Also, “Don’t be afraid to walk away from rooms and from people—if they don’t make you learn, inspired or feel good,” she said. The “leave quietly” button is there for a reason.

Tripp sees Clubhouse as a valuable experience, but also just the beginning. She suggested following people who inspire you on other social media platforms to keep the communication and collaboration going.