Union members in Orlando, Las Vegas, New Orleans, Sacramento and Detroit held a press conference on Monday, Nov. 21, to warn of potential strikes in Las Vegas and Orlando and labor disputes in other markets.

According to a release from UNITE HERE, “cooks, dishwashers, banquet servers, concession cashiers, and other Sodexo Live! workers at the Orange County Convention Center in Orlando announced that they have voted to authorize a strike by 100%. Centerplate workers at Las Vegas Convention Center will hold a strike vote on Dec. 7 and 8. Centerplate was purchased by Sodexo in 2017.”

At the press conference, UNITE HERE union officials said that meeting levels in 2023 and 2024 are expected to surpass numbers from 2018, but the union says that job salaries and benefits are not enough to keep up with the cost of living.

At issue as well are reductions in Sodexo workforce, which UNITE HERE says amount to a loss of about 38% across convention centers. D. Taylor, international president of the union, said “strikes at the country’s second and third largest convention centers are a real possibility if Sodexo doesn’t start treating workers with the respect they deserve.”

A Sodexo spokesperson told Smart Meetings that “meeting planners in all of the cities should be assured that we are wholly optimistic of new CBAs being worked out.”

He also said, “there are always contingency plans for any scenario, but we fully anticipate striking a long-term, mutually beneficial deal in the near future.”

InterContinental Hotels Group and Iberostar Hotels & Resorts have announced a long‑term commercial agreement for resort and all-inclusive hotels. Up to 70 hotels (24,300 rooms) will be added to IHG’s system under the Iberostar Beachfront Resorts brand, which will become the 18th brand for IHG. The first properties set to join the IHG system this December include resorts in Mexico, the Dominican Republic, Jamaica, Brazil and the Canary Islands (Spain). Further properties in Spain and other popular resort destinations in Southern Europe and North Africa will join IHG’s system through 2023 and 2024. 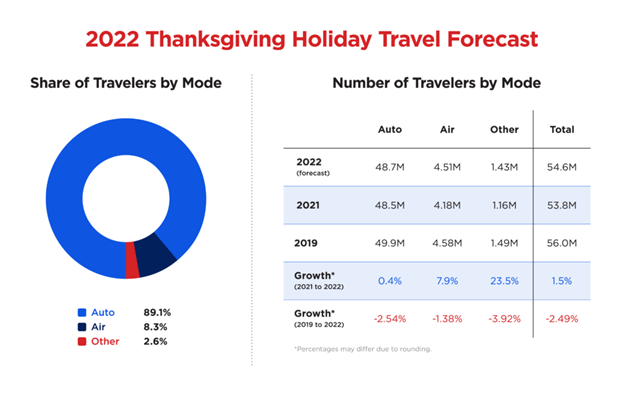 American Automobile Association (AAA) is predicting that 54.6 million people will travel over 50 miles from home this Thanksgiving, a 1.5% increase over 2021 and 98% of pre-pandemic levels. AAA says the year will be the third busiest for Thanksgiving travel since the association started tracking levels in 2000.

Anaheim breaks ground on ocV!BE in January 2023, with completion slated for 2028. The multiuse development will include entertainment, food and housing. Read on for more.