More than one-quarter of business travelers from the Americas believe their business travel commitments erode their home and personal relationships, according to a recent survey. This was one of several findings in the survey, which suggest that companies related to the meetings industry and others need to help address the needs of traveling staff members.

Results of the survey—which was created this year to discover the pain points of business travel by the B2B4E travel management platform CWT and conducted by Artemis Strategy Group—showed that 26 percent of business travelers from the Americas feel that their relationships suffer due to travel, compared with 23 percent of their counterparts from Europe and 18 percent from Asia-Pacific.

Respondents were divided into baby boomers, Gen X and millennials in the three regions. In the Americas, the Gen X travelers were the most likely to say that their relationships suffer, while in Europe and Asia Pacific, baby boomers were most likely to do so. 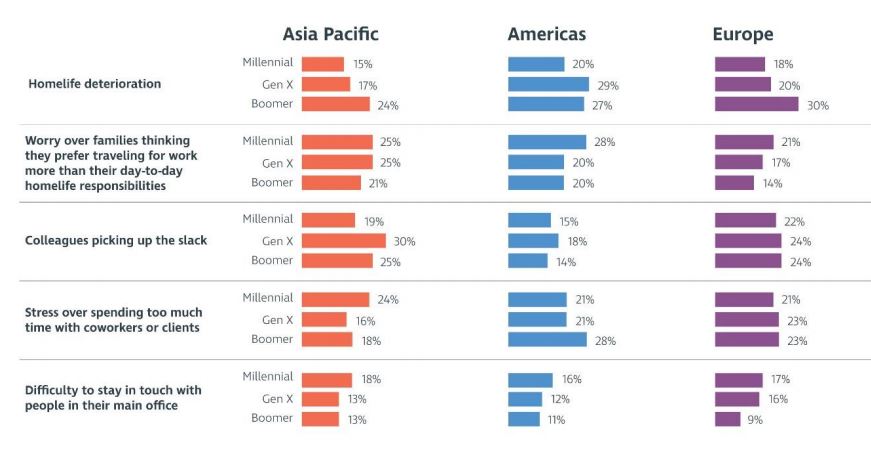 Concern About Their Family’s Perception

The survey also asked if the business travelers worry about their families thinking they would rather travel for work than handle their day-to-day homelife responsibilities. More than one-fifth (21 percent) said that they are worried about it, broken down to 22 percent in the Americas, 17 percent of Europeans and 23 percent of Asia Pacific respondents. Millennials were the most concerned demographic group in the three regions, although in the Asia Pacific, Gen X respondents showed equal concern.

“Even though the same research reveals that business travelers feel that positives outweigh negatives at work [92 percent] and at home [82 percent], when traveling for business, companies need to be aware of the concerns that business travelers face, and help to address them head-on,” said Catherine Maguire-Vielle, CWT’s executive vice president and chief human resources officer. “Relationships are a fundamental part of a person’s well-being, and companies have the obligation to ensure their employees’ travels are not jeopardizing them at home or in the office.”

The survey also showed that nearly one-quarter of business travelers feel guilty that their colleagues must pick up the slack in their absence. Twenty-five percent of the Asia-Pacific travelers said they feel guilty about it, compared with 24 percent of Europeans and 16 percent of those in the Americas. Overall, Gen X travelers were most concerned, followed by baby boomers and millennials.

Slightly fewer business travelers (13 percent) in the Americas than their European and Asia Pacific  counterparts (both 14 percent) said they are concerned about staying in touch with people in their main office. In each geographical group, millennials ranked as the most concerned.

More than one-fifth (21 percent) of respondents reported that they stress over spending too much time with co-workers or clients on the road. Generational differences were seen in the three regions, with the most stressed groups being baby boomers in the Americas, Gen X and baby boomers in Europe, and millennials in Asia Pacific.

Survey responses were collected from more than 2,700 business travelers in the Americas, Europe and Asia Pacific who traveled four or more times in the previous 12 months. Respondents in the Americas hailed from Argentina, Brazil, Canada, Mexico and the United States; those in Europe were from Belgium, France, Germany, Italy, the Netherlands, Spain, Sweden and the United Kingdom; and those in Asia Pacific were from Australia, China, India, Japan and Singapore.