He stands serenely in front of his audiences, eloquently delivering groundbreaking talks that integrate modern science and traditional wisdom.

It’s easy to label Dr. Deepak Chopra as a progressive, serious intellectual, but this is far too limiting. His work is as much poetry as it is science, as simple as it is complex, as playful as it is serious.

Chopra, 67, has described himself as “playful” and “carefree,” and despite the profound nature of his work, during his illuminating lectures and conversations, he projects a lightness of being, a calming presence. It seems perfectly appropriate that his first name means “light” in Hindi.

One of the mantras in the “21-Day Meditation Transformation Trilogy” that he created with Oprah Winfrey focuses on the Hindu concept of lila, the playfulness of life, underlying all creation. “It instructs us that life isn’t compelled by responsibility, laws and determinism,” he writes. “Life springs from play, light, freedom and joy.”

This may appear to be in stark contrast to Chopra’s more intellectual presentations of his views, but it is merely a more poetic expression of his idea that we all are part of an interconnected universe that in its primordial state is balanced and harmonious. 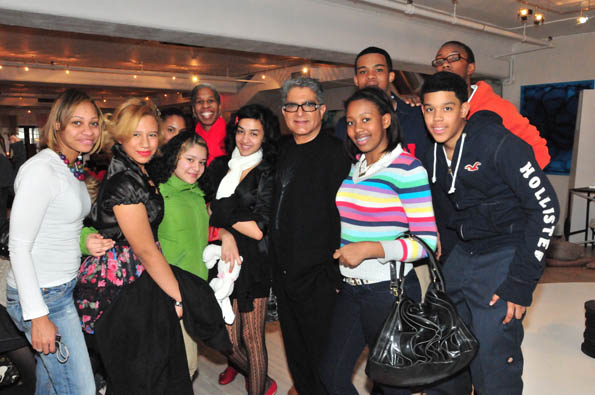 After leading a meditation, Deepak Chopra gathers with youth from Peace is a Lifestyle, a Chopra Foundation initiative that incorporates peace practices and conscious choice-making practices to help develop teens and young adults into peer leaders for a more peaceful, just, sustainable, happier and healthy world.

Time magazine got it partly right when it referred to Chopra as the “poet-prophet of alternative medicine.” His work actually falls much more into the realm of integrated, rather than alternative, medicine. Originally an aspiring writer who loved the work of Samuel Coleridge, William Shakespeare, Thomas Hardy, Mark Twain and other English literary giants, Chopra graduated as a physician from the prestigious All India Institute of Medical Sciences in 1969 with training in internal medicine and endocrinology.

He subsequently passed the American Medical Association exam and went on to teach at the Tufts University, Boston University and Harvard University medical schools. Chopra then began serving as chief of staff, at the age of 31, at New England Memorial Hospital (NEMH, later known as Boston Regional Medical Center) before starting a private practice in endocrinology in Boston.

Chopra’s popularity grew by leaps and bounds after the publication in 1993 of his Ageless Body, Timeless Mind, which sold more than 1 million hardcover copies alone. He became a wealthy, full-fledged celebrity and a close friend of Winfrey, Michael Jackson and Elizabeth Taylor, among others.

He has retained a respect for Western medicine and science in general while integrating it with Asian approaches in his vast amount of work—which includes more than 80 books (translated into 43 languages), a busy lecture schedule, frequent appearances on television and substantial involvement with several organizations and institutions. His work covers a wide spectrum, including the hospitality and meetings industry as he helps to create more healthy environments in hotel rooms and meeting spaces.

Chopra is such a prominent health advocate that it’s hard to visualize him smoking up to a pack of cigarettes a day, consistently drinking and constantly stressed. But that describes his lifestyle before his consciousness gradually began shifting in the 1980s.

He then began delving into the works of Jiddu Krishnamurti, a prominent East Indian philosopher, and met Maharishi Mahesh Yogi, a spiritual teacher best known for developing Transcendental Meditation (TM). They—along with Hindu spiritual luminaries Ramana Maharshi and Swami Vivekananda—had profound effects on Chopra, and inspired him to embark on a more comprehensive approach not only to health and wellness, but also to life in general.

Chopra began practicing TM (he still meditates) and in 1985 he resigned from his position at NEMH to become the medical director of the Maharishi Ayur-Veda Health Center in Lancaster, Massachusetts. He started integrating Ayurveda—a 5,000-year-old system of natural healing that has its origins in India’s Vedic culture—with Western medicine.

Ayurveda is based on the belief that good health is dependent upon the balanced and dynamic integration between our environment, body, mind and spirit. An important goal of Ayurveda is to identify a person’s ideal state of balance, determine where he or she is out of balance, and offer interventions using diet, herbs, aromatherapy, massage treatments, music and meditation to re-establish balance.

Right away, Chopra’s work was dismissed by much of the Western medical establishment as everything from scientifically unfounded to complete quackery.

“At the time, it was sacrilegious to talk about any sort of practice outside of the reductionist, postmodern, scientific and materialistic paradigm,” he says. “Anyone in the medical community who talked about consciousness, mind-body medicine or anything of that sort was highly criticized. But a paradigm shift was inevitable.”

Chopra’s approach to health and wellness has increasingly fused Ayurveda with the most advanced developments in modern allopathic medicine to achieve mind-body-spirit integration. Crucial to his work is the underlying belief that the body, like the universe in general, is an interconnected, interdependent system.

While growing up in New Delhi, Chopra was introduced to the notion that the universe is interconnected. Though he received a traditional Western education at St. Columba’s School, an Irish-Christian missionary school, interconnectivity ran through much of the poetry he heard as a child while accompanying his father, Dr. Krishnan Lal Chopra, a prominent cardiologist, to all-night readings. The poetry was read in Urdu, a form of the Hindustani language written in the Persian script. Much of Urdu poetry is deeply spiritual, and Chopra’s experiences at these readings helped to inspire a lifelong love of poetry.

Young Chopra also was fascinated by the spiritual yearnings expressed in Indian poetry that was set to music at gatherings in his grandmother’s house in New Delhi.

“I fell in love with all kinds of poetry—and I still love it,” Chopra says. “It gives me peak experiences.”

The term “peak experiences” was coined by American psychologist and philosopher Abraham H. Maslow to describe sudden feelings of intense happiness and well-being; in some cases, these experiences refer to a spiritual awakening and the realization of the unity of all things.

Chopra grew particularly fond of the poems of Rabindranath Tagore, the first Asian to win the Nobel Prize for Literature (1913); Jalal-ad-Din Muhammad Rumi, a 13th-century Persian poet, jurist, theologian and mystic most associated with Sufism; Mirabai, a 16th-century Hindu mystic poetess; Hafiz, a 14th-century Persian poet who lauded the joys of love, but also targeted religious hypocrisy; and Kabir (1440-1518), an Indian mystic poet and saint whose work is revered by Hindus, Muslims and Sikhs alike.

Chopra, who does not practice any form of organized religion, provides contemporary adaptations of some of the work of these writers in books that he has compiled—The Soul in Love: Classic Poems of Ecstasy and Exaltation; Love Poems of Rumi; and On the Shores of Eternity: Poems from Tagore on Immortality and Beyond.

He frequently draws from Tagore in his work, and Chopra’s worldview perfectly harmonizes with a Tagore poem that he titled “A Dance Beyond Death” (taken from On the Shores of Eternity). An excerpt reads:

“I wish that the whole environmental movement would latch onto this poem,” Chopra says.

The Chopra Center for Wellbeing, founded by Chopra and Dr. David Simon, also is based on the notion that all of life is integrated. Originally in La Jolla and now based at Omni La Costa Resort & Spa in Carlsbad, California, the center is designed to help people heal their physical bodies, find emotional freedom, empower themselves and experience spiritual awakening. The foundation also offers at-risk children, prisoners and low-income women and teenagers classes and resources for health and spiritual development.

Another objective of the foundation is to advance mind/body spiritual healing, education and research through fundraising for selected projects. “I think that we’re at the forefront of integrative medicine,” Chopra says.

The Stay Well program at the MGM Grand Hotel & Casino in Las Vegas is founded on some of the same principles as Chopra’s center. Paul Scialla is the founder and CEO of Delos, which focuses on nurturing and promoting health and well-being in indoor environments. Scialla discussed plans for the MGM Grand with Chopra one morning over breakfast.

“After Paul told me what he was going to do, I began watching the progress of the project. At some point, I decided that I wanted to be a part of it,” says Chopra, who then joined the Delos advisory board.

Stay Well rooms offer dozens of wellness features, including aromatherapy, an advanced air-purification system, healthy bedding, a water-purification system, and healthy food and beverage choices. Initially, 42 hotel rooms on the 14th floor of the property became Stay Well rooms, and early in 2014, the additional 129 rooms on the floor were converted. In August, the MGM Grand and Delos took another major step by unveiling Stay Well meetings, consisting of many of the same features available in Stay Well rooms.

“Delos is a pioneer, particularly in the whole area of Stay Well Meetings, which creates an environment that makes a meeting much more productive,” Chopra says. “If your body is energetic and joyful; if your mind is restful, alert and sharp; and if you experience some lightness in your being, then you’re going to be much more productive.

“Stay Well Meetings rooms facilitate these qualities in everything from the quality of the air to the water people drink, the food that’s offered, the lighting, the breaks for meditation, and the movement, breathing and mental exercises. They all facilitate focusing when you’re working mindfully because they create a feeling of well-being in your body.”

Last year, Chopra purchased a Delos wellness home—which offers many of the same features as the Stay Well rooms—in New York City. He continues to serve the Stay Well program by giving advice on specific features and how to integrate them within rooms and meeting spaces.

“In the future, my role will be to look, along with other physicians, for scientific validation of what Stay Well is offering,” he says. “We need to provide some data that shows that people who attend [Stay Well] meetings are happy with the outcome, and that this translates into productivity and economic benefits.”

Though some scientific studies have shown the value of wellness practices, Chopra says more scientific validation is needed, in general. At the Chopra Center for Wellbeing, scientists from Harvard University, Mount Sinai Hospital in New York, University of California San Diego, University of California San Francisco, Duke University and Scripps Translational Science Institute are studying the effects of meditation, yoga, and herbs, among other things, on a person’s state of well-being. The study began in September and is scheduled to be completed in August.

“Preliminary data shows that [through such practices,] you can extend life, reverse some of the biological markers of aging such as the cellular level, restore homeostasis and actually reverse many chronic illnesses,” he says.

Chopra is gratified that in the past 30 years, integrative science and medicine have gained more respect in the academic and scientific communities.

“A new generation of biologists has pioneered new fields, including epigenetics and neuroplasticity,” he says. “A new science is blossoming, and much of it is emerging from Eastern philosophical perspectives.”

He regards his efforts as part of a growing tide that is developing this new science, which points to the importance of personal and social transformation. Chopra plays down the significance of his own singular accomplishments, saying that if he is one of many people contributing, and if he hadn’t taken the lead, someone else would have done so.

“I hope that my legacy will be that I participated in contributing to a more peaceful, happier and healthier world,” he says.

Hobbies: scuba diving and reading. He vacations with his family twice per year, sometimes traveling to Africa or spending time in New York City.