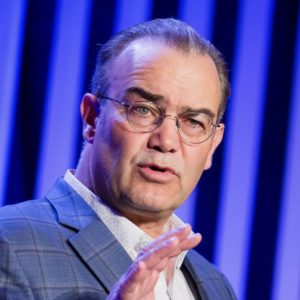 Background: Speaker on new technologies and trends; former managing editor at the original Wired magazine. Coauthor of The Long Boom and What’s Next

Current: Founder of Reinvent, a company that drives conversations with leading innovators about the future

Quotable: “We are actually lucky that this happened now and not 20 years ago.”

If video conferencing were a person, what stage of life is it in right now

It has graduated from college and pretty much has itself together. It has developed a lot from its infancy and is now serviceable, easy, accessible and ubiquitous. But in the bigger picture, it is still in its early days.

We have to learn to get beyond the inadequacies of security and behavioral limitations. It will probably never completely supersede full-blown connection of serendipity and group hugs that happen at live events. We are seeing a lot of experimenting that is resulting in an enriched, more compelling and useful experience.

How would you describe the COVID effect on the technology?

Just as it has in other areas of life, the pandemic has accelerated the trend that was already in place—by focusing enormous effort and investment, and forcing people to use and become familiar with the tools. Disruption removes inertia and forces a re-evaluation of what could be done. It has put livestreaming adoption on steroids and is forcing innovation.

It could also cause a lot of pain, lost income and lost jobs. You have to have a strong stomach and plenty of nerves to get through times like this. On the other side, it could be better for workers and for customers. There will be a bunch of changes, and we will have options we didn’t have before. Perhaps we will realize the promise of the early internet and be able to live in the mountains and work for companies in different parts of the country.

Unfortunately, that is how the economy and progress works.

We need integration of other tools so there is a seamless and intuitive way to combine keynotes, networking and commerce. Then we need to enrich the environment with virtual reality, which is not quite ready for prime time, but it is coming.

Even in cases where the technology is ready and meeting professionals are trained, attendees and advertisers need to embrace the technology as well, to make it work. I planned “What’s Now: San Francisco” as a virtual-event series with high-quality, interactive livestreamed group video that featured people reinventing their field—think Whole Earth Catalog creator Stewart Brand, legendary geneticist George Church and the author of The Lean Startup on reinventing the stock exchange. The only problem was that sponsors weren’t ready to support virtual-only, so I had to have a physical component.

By midlife, virtual will be a pretty darn good experience, and hybrid meetings will be more equally employed.

Any words of wisdom for meeting professionals trying to get through this time?

Human beings need to gather. That will never go away.

We are actually lucky that this happened now and not 20 years ago when fewer people had high-speed internet and video streaming was still in the early days. We didn’t even know how to map the genome in 2000, so finding a vaccine would have been very expensive and taken even longer. We are in a much better position to deal with this today than at any point in history.

The Mutual Benefits of Planning with a Unionized Property

As with many Monday holidays, most appreciate Labor Day for shortening the work week. However, with the chaotic state of staffing in the hospitality industry, the 140th year of celebrating labor unions merits a second look. Unionized hotels provide the stability and training that hospitality workers are seeking—they could be part of the solution to […]

5 Ways to Create an Unforgettable Event

By JT Long
How To Strategy

Why Event-led Growth Is the Key to Long-term Success