Services are down, prices and occupancy are up—is this a blip or a trend?

Perhaps you’ve been there. The luxe hotel where only a single restaurant is serving guests, and with limited hours. Room service replaced by DoorDash. Housekeeping by request only, or maybe just a “tidy” to drop off fresh towels and empty the wastebaskets. Concierge services spotty or unavailable.

Maybe that’s why overall hotel-guest satisfaction fell 8 points over the past year, according to the J.D. Power North America Hotel Guest Satisfaction Index.

Oh, and there’s that price tag. If it’s in a desirable coastal locale, especially, you needed that soothing spa treatment (if it was available) to calm the sticker shock. In June 2019, reported Bloomberg Businessweek, a night at Florida’s five-star resort The Breakers Palm Beach could be had for $350; a weekend night this past June started at $1,450. Now, as a chill in the air signals sweater season up north, entry-level prices on the hotel’s website begin at $1,190.

Despite the cost, demand skyrocketed. STR, the Tennessee-based tracker of hotel data, pegged average daily guest room rates from mid-April to mid-May in greater Miami at 55% above pre-pandemic levels. Across the country, resort prices were up by a third.

So…services down, occupancy and prices way up. The hotel world on which meeting professionals depend and must navigate for their livelihoods seems all topsy-turvy. Why precisely is this happening? And as we continue to recover from the worst period in our lifetimes for both the hospitality and meetings sectors, how much will remain as the new normal?

The explanation begins with understanding the underpinnings of the hospitality industry. Picture a hotel held up by three legs. Jan Freitag, national director for hospitality analytics for the CoStar Group, names them: leisure, corporate transient, corporate group. Although the size and strength of each leg varies by market and property, all three are strong and healthy in a perfect world.

At present, only one leg is fully alive and kicking—in fact, it’s overperforming. “Leisure travelers, arguably, saved the hotel industry in 2021,” says Freitag. In large part, the pent-up urge to hit the beach or other ur-resort setting by those of us cooped up during the pandemic who could afford a splurge—cracking open vacation piggy banks untouched for two years, perhaps—ignited the room rate rockets.

Corporate transient business is all those business trips that don’t involve a meeting planner. They’re trips to the home or satellite offices, sales calls, visits to suppliers or business partners. They’re down but “what this decline looks like going forward is anybody’s guess,” Freitag says. He guesses 10% or maybe 15%—“we’re not going back to 2019 numbers”—but cautions “we don’t know yet” where the fallout will end.

Why? His answer: “We have not yet figured out what return-to-office looks like. I can’t fly to the office for meetings if everyone I need to meet is sitting in their kitchens in their PJs.” He also thinks heightened monitoring of employee carbon footprints as part of overall corporate environmental initiatives will curtail marginal trips when a Zoom meeting will do instead.

Many hotels have noticed an uptick in bleisure travel—Freitag prefers the term “blended travel”—which fuses two of the legs. “You come on Thursday for a meeting, but Friday is a day you don’t work, and then you stay till Monday,” in his words.

The third leg is the one you stand on. “I am very, very bullish on group travel,” he declares, defining this category as room blocks of 10 or more. His enthusiasm is backed by data. Compared to leisure travel, the return of group travel has been a slower build—but steady, nonetheless. Through the end of July, corporate events in the United States have returned to more than 60 percent of pre-pandemic numbers, according to the Meetings Recovery Forecast by Knowland, a company that tracks meetings and events.

More encouragingly, the trend line is indisputably upward: Knowland says recovery in the year’s first three months was only 48 percent, with a leap to 69 percent in the second quarter; it predicts 72 percent recovery by year’s end.

Freitag explains why: If people aren’t in the office, the social piece—gathering around the proverbial water cooler—is missing. “Now instead, it’s log onto your 9 o’clock meeting, talk, talk, talk, then hop onto the next call. CEOs are realizing the social piece is so critical to making a company run. So, they’re saying things like, ‘Let’s have all our people on the East Coast gather for a weekend.’”

He’s equally bullish on the really big revenue generator for hotels and meeting professionals—conventions. “If I’m not traveling to you, we’re still all part of the, let’s say, cement industry. What used to be six trips to my customers or suppliers is now six meetings at our big industry convention in Vegas.” 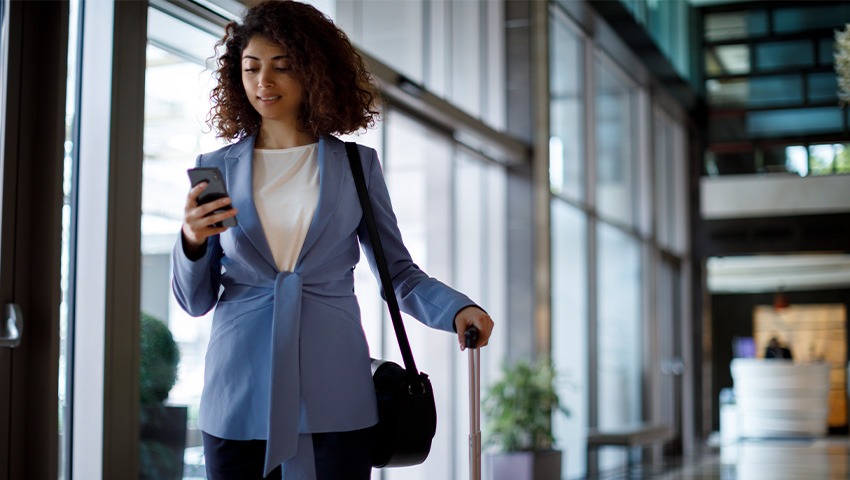 Most experts seem to agree that, going forward, service levels at hotels will normalize by price point. “At the highest luxury levels, you will see all the service and amenities that go with the price,” is how Freitag puts it, adding, “Go down the food chain, there will be some services we may not see again.”

He notes that some changes predate the pandemic—the disappearance of the lobby-level restaurant, for one, and its replacement by a high-end grab-and-go with nice sandwiches and salads (which then might become a cocktail bar in the evening).

“On the housekeeping side, the verdict is still out. We may not see the return of stayover housekeeping services. I would not be surprised if owners say, ‘We have a really hard time staffing this.’”

As a result, major hoteliers have experimented with opt-in-only housekeeping at their nonluxury brands. “We’re listening to the needs of our guests at the local level, so we’ve made specific adjustments to these standards region by region to align with their preferences at this stage of the recovery,” Phil Cordell, senior vice president of brand development at Hilton Hotels & Resorts, recently told USA Today.

Guest preferences have morphed due to Covid and its ongoing variants. Back in 2020, a survey for American Hotel & Lodging Association (AHLA) found nearly two-thirds did not want daily housekeeping. Now, as Freitag observes, “More and more people are saying, ‘Don’t touch my stuff, I’m fine. I don’t need new towels every night. I don’t do that at home.’”

Industry watchers note there’s another trend that the pandemic, if it didn’t originate at least accelerated: high tech over high touch. Thus, online check-in and keyless guest room entry, mobile app access to concierge and other hotel services like texting the front desk to request extra blankets or pillows, robots delivering meals from the kitchen and vacuuming carpets. (At Cape Rey Carlsbad Beach, a Hilton Resort & Spa in Carlsbad, Calif., a robot named Alfred does a song and dance with its orders, an especially big hit with kids.)

“If guests can get something done with less contact with the hotel staff, they’re opting for that more and more,” says Mehmet Erdem, associate professor at William F. Harrah College of Hospitality at University of Nevada in Las Vegas.

Maybe it’s a good thing guests want to be left alone. You’re no doubt aware hotels are begging for staff. It’s been reported some hotels have tried to lure housekeeping and kitchen staff with sign-on and referral bonuses as high as $2,000, as well as increased hourly pay, more flexible hours and sweetened benefits.

“If guests can get something done with less contact with the hotel staff, they’re opting for that more and more.”

Hilton is trying a new payroll system at some hotels. In partnership with DailyPay, a financial services company, it’s piloting a program that allows employees to “borrow” their earned wages daily for a small fee rather than waiting for traditional paychecks. The company says it’s experiencing lower turnover by workers enrolled in the program.

The U.S. hospitality and leisure industry lost nearly half of its jobs in March and April 2020, according to Tourism Economics, an Oxford Economics company. By this past June, about 1.7 million “accommodation workers” were employed, a decline of some 16% from 2019, says the U.S. Bureau of Labor Statistics. As of the beginning of September, 120,000 hotel jobs were unfilled.

A May survey by AHLA revealed that a whopping 97% of respondents were short on staff, with housekeeping ranked as the most critical need. The association has registered Sept. 1 as National Hotel Employee Day and is trying to combat any perception that hotel work is an unfulfilling dead end by pointing out that half of hotel managers started out in entry-level positions.

A portion of this year’s hotel demand pressure (and subsequent price hikes), industry analysts note, can be attributed to full-service hotels selling fewer rooms than they could because there aren’t enough housekeepers to clean them. It’s become commonplace for check-ins to be delayed to 4 p.m. or even later so understaffed and overworked housekeeping can finish readying room turnovers.

Hotel restaurants are suffering from worker shortages even more acute in some ways—in large part because workers can more easily build on housekeeping skills learned at home than on those required in a demanding hotel kitchen. Susan Buckley, vice president of food and beverage for Ace Hotel Group, which manages eight hotels worldwide, told The Wall Street Journal a restaurant can quickly lose half its staff if a hotel down the street starts paying $1 more an hour.

To fill openings, she says, Ace staff has been tasked with handing out “special recruitment cards” to servers who impress them when they dine out. “It’s sort of a subtle poaching. I think everybody’s doing it.”

Hospitality companies and many individual hotels are making money again. Marriott International, for instance, reported “outstanding” second quarter 2022 results of $678 million, compared to $232 million in the same period of 2019. Yet hotel owners (as opposed to companies such as Marriott that are primarily hotel brand franchisers) say it’s not enough to completely pay back lenders, fully rehire staff and invest in delayed property improvements.

But what about room rates? Will they come down? Constraints on supply—a slowdown in the hotel development pipeline—might keep them higher than otherwise. As Christopher Nassetta, CEO of Hilton Worldwide, recently told CNBC, hotel room rates will likely continue to grow because there will be “very little incremental new capacity coming into the industry. The laws of supply and demand, laws of economics, are alive and well.”

In March 2019, some 219,000 new hotel rooms were on the way. In July of this year that number was down to about 150,000. And most of these were select-service and boutique properties, not primarily meetings hotels. “It’s hard to break ground, and loans are harder to obtain,” Freitag says. “And maybe there’s no rush because of supply issues. Those doors, mirrors and so on can be backordered for months.”

And then, of course, there’s the inflation factor. In the U.S., overall room rates in late summer were 17 percent higher than July 2019, Freitag says. “If adjusted for inflation, though, that’s just barely higher. Everything is much more expensive. It will be interesting to see how things pan out. Corporate transient and corporate groups often pay discounted rates, so we’ll see how that shapes up.”

This article appears in the October/November 2022 issue. You can subscribe to the magazine here.