Arianna Huffington decries society’s traditional notion of success, where working to the point of exhaustion is considered a badge of honor and sleep is dismissed as a waste of time. The co-founder, president and editor-in-chief of the Huffington Post Media Group is calling on women to take a leadership role in fundamentally changing what is valued in the workplace.

“We women are literally going to sleep our way to the top,” she jokes in a 2010 TED Talk that has garnered almost 3.5 million views on YouTube, but Huffington is dead serious about the importance of shut eye. The media mogul, who made Time magazine’s list of the World’s 100 Most Influential People and in 2014 was named No. 52 on Forbes’ World’s Most Powerful Women list, is a vocal advocate for the regenerative power of sleep. Her 15th book, The Sleep Revolution: Transforming Your Life One Night at a Time, is an exhaustive study examining the history and mystery of sleep. It will be released April 5.

Huffington, 65, unabashedly enjoys cat naps on the couch in her office. Years ago, she installed nap rooms in The Huffington Post’s New York headquarters and actively encouraged employees to use them for midday power snoozes. Much to her delight, other high-profile companies including Google, Facebook and Procter & Gamble, as well as University of Michigan in Ann Arbor, have followed suit.

“The business world is waking up to the high cost of sleep deprivation on productivity, health care and ultimately the bottom line,” she says. “I expect the nap room to become as universal as the conference room.”

Women Will Lead the Way

Huffington’s own personal wake-up call came in 2007, when she collapsed from severe exhaustion at her desk, fracturing a cheekbone and requiring stitches above her eye. Huffington realized that her grueling pace, which at the time consisted of 18-hour workdays, seven days a week, was destroying her health. The harrowing experience transformed her into an evangelist who now actively promotes life/work balance. She believes the corporate world must play an integral role in leading the reform.

“Many of us have been operating under the collective delusion that burning out is the necessary price for accomplishment and success,” Huffington says. “Findings make it clear that not only is there no tradeoff between living a well-rounded life and high performance; performance is actually improved when our lives include time for renewal.”

Huffington believes women, who are rising to positions of power, will be a big part of the transformation. “We are witnessing a global shift toward leadership values and abilities traditionally considered feminine, such as empathy, compassion and collaboration,” she says, adding that the patriarchal paradigm of working oneself into the ground (or grave) no longer works for women…or men.

Huffington with daughters, Christina and Isabella

While Huffington acknowledges that workplace changes are required, she envisions a new path. “The world needs women to not just climb the ladder of success—a misguided definition of success that was largely created by men—but to chart a new path that includes well-being, wisdom, wonder and giving,” Huffington says. “We need to live our lives as women, not as carbon copies of men.”

This is a theme Huffington began exploring in her 2014 best-seller, Thrive: The Third Metric to Redefining Success and Creating a Life of Well-Being, Wisdom and Wonder. In it she introduces a new way of defining success that goes beyond the old metrics of money and power. Her philosophy, she emphasizes, is not about slacking off or being lazy. It is about putting in a good day’s work, and then disconnecting from the office and reconnecting with family, friends or whatever is personally meaningful. It is about valuing the R&R she feels humans need and deserve.

Huffington wryly points out that we are much better at taking care of our smartphones—making sure they are fully recharged on a daily basis—than ourselves.

A key issue holding women back is that they tend to internalize failures and listen to negative self-talk, Huffington says, adding that even she is guilty of this. “It’s the voice that feeds on putting us down and strengthening our insecurities and doubts. I have spent many years trying to evict the obnoxious roommate living in my head, and have now managed to relegate her to only occasional guest appearances,” she says.

In addition to sleep, Huffington is a proponent of workplace wellness initiatives such as yoga and meditation classes. A growing concern is how much time the average office worker spends sitting. Huffington suggests walking meetings, either around the office or outside.

Although Huffington has dabbled in politics and acting, the focus of her illustrious career has been media. In 2005, she and a partner launched The Huffington Post, an online news and blog vehicle that has become one of the most widely followed international media brands. In 2011 she sold the site to AOL for more than $300 million and now serves as president and editor-in-chief of the company’s Huffington Post Media Group. She still pens a syndicated column and has published books on topics ranging from politics to history, art and feminism.

Her original reasons for founding the groundbreaking website relate to her heritage. “Bringing together people from different worlds and facilitating interesting conversations have always been part of my Greek DNA,” says Huffington, who was born in Athens. “From the beginning, the whole point of The Huffington Post was to take the sort of conversations found at water coolers and around dinner tables—about politics and art and books and food—and open them up and bring them online.”

In an era when many media brands are struggling, The Huffington Post has remained strong and relevant. In Huffington’s opinion, this is because it’s “both a journalistic outlet and a blogging platform, and we believe in the hybrid future of media.” According to Huffington, the site successfully merges “the best practices of traditional journalism—fairness, accuracy, storytelling, deep investigations—with the best tools available to the digital world—speed, transparency and above all, engagement.”

It is paradoxical that Huffington, who is responsible for creating one of the most engaging websites on the Internet, is now urging people to tear themselves away and disconnect from it…at least at night. 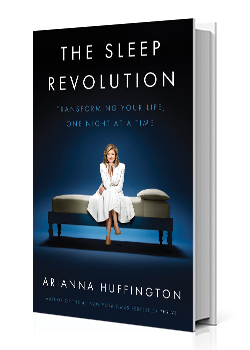 –Sleep is a fundamental and non-negotiable human need.
–Exhaustion is a sign of chaos, not a badge of honor.
–A good day starts the night before.
–We should treat ourselves like our smartphones, making sure we sleep until fully recharged.
–The bedroom is not for work.
–Great pajamas are a great investment.
–When we walk in our bedroom, we should leave the day—with all of its problems and unfinished business—behind.