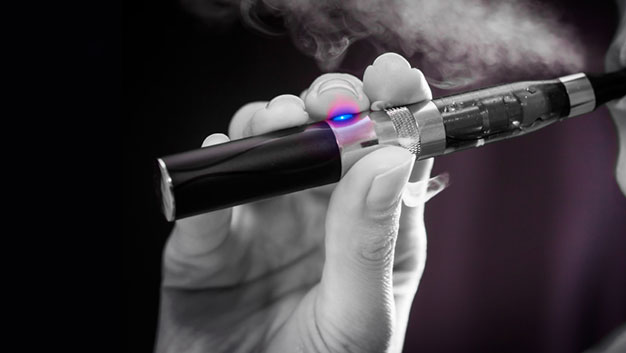 Battery powered e-cigarettes can heat up to more than 200 degrees Fahrenheit as they convert liquid nicotine into an inhalable vapor. There is now growing concern about permitting e-cigarettes in checked baggage because in several instances the heating element has accidentally activated, causing fires.

The first incident occurred August 9 at Boston’s Logan Airport, when e-cigarettes packed in a passenger’s checked bag in the cargo hold of a JetBlue aircraft caused a fire that forced a temporary evacuation of the plane. A baggage handler safely extinguished the fire and the aircraft departed for Buffalo, N.Y. In a separate incident that occurred this January at Los Angeles International Airport, an overheated e-cigarette in checked luggage waiting in the baggage area spontaneously caught fire.

These incidents, as well as others, have prompted the FAA to issue an official warning to U.S. carriers stating tobacco alternative devices "can pose a fire hazard in the cargo compartment of planes." The FAA has cracked down on the transport of lithium ion batteries, which it says can ignite in flight. E-cigarettes are powered by lithium cells.

Airlines differ in their approach to e-cigarettes and vaporizers. United Airlines allows passengers to bring e-cigarettes and personal vaporizers on board as carry-on, but will not accept them in checked or gate-checked bags. Southwest Airlines permits them to be brought aboard in carry-on baggage and placed in checked luggage as long as the battery (and any spare batteries) are removed from the devices, protected from short circuit and transported as carry-on baggage.  LIAT, a regional airline that connects the Caribbean, just banned the transport of e-cigarettes in checked luggage, saying they are a fire risk, and are advising passengers not to bring e-cigarettes aboard in carry-on baggage, either.

Although policies differ as to the transport of e-cigarettes and vaporizers, there is unanimous agreement among major U.S. airlines prohibiting their use in-flight. About three years ago, the U.S. Department of Transportation proposed specifically banning their use on commercial flights however the proposal was never finalized. The FAA hasn’t issued an official ruling on this.