Even the artwork at Houston’s reimagined convention district is inviting. As Houston prepares to host the Super Bowl on Feb. 5, the new Avenida Houston district christened a piece of artwork that is designed to welcome the public and delegates to George R. Brown Convention Center.

Houston First commissioned Ed Wilson’s Soaring In The Clouds for the redesigned lobby of the convention center. The 67-foot mobile is suspended from the ceiling, with LED lights illuminating bird and cloud forms. The 200 individual forms, each shaped by hand, will move with the airflow of the building. 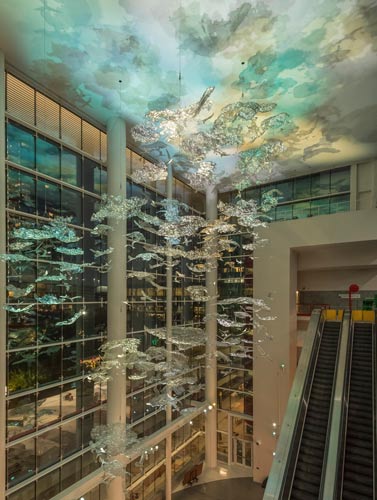 The new art installation is part of a $1.5 billion project that will totally change the face of meetings and conventions in America’s fourth-largest city. The most noticeable change will be the new five-block, pedestrian-friendly Avenida Houston, which can host outdoor gatherings for convention attendees. It offers 99,000 sq. ft. of space, and will connect delegates to such popular attractions as Minute Maid Ballpark, Toyota Center and BBVA Stadium.

According to David Mincberg, chairman of Houston First, the local-government corporation that operates the downtown convention center, they are incorporating dramatic pieces of art that will help bring character and life to its major meeting venue and the Avenida Houston district that surrounds the convention center.

“We believe the vibrant sculpture Ed Wilson has created will be visible from the entire Avenida Houston campus and will invite people into this building like never before,” Mincberg says. “Aesthetics like these will improve the convention-goer’s experience and attract art lovers from throughout a region that now numbers 6.5 million people. That’s a big built-in audience.”

One of the key new components of the project is the 1,000-room Marriott Marquis Houston, which opened in November. It’s connected to George R. Brown Convention Center via skybridge. But it will probably better known as the hotel with the Texas-shaped lazy river. It’s important to note that the Marriott will have 100,000 sq. ft. of meeting space.

The second anchor hotel connected to the convention center by skybridge is the existing 1,200-room Hilton Americas-Houston. The Hilton offers more than 90,000 sq. ft. of event space.

The Dallas Metroplex—including Fort Worth, Arlington, Frisco and Denton—combines destinations that work as standalones into one megadestination. Add to the equation the almost constant forward motion of new development and an abundance of intellectual capital with 23 Fortune 500 companies headquartered there and you have a perennial meeting favorite.