Earlier this month, Smart Meetings received a hard hat in the shape of a cowboy hat in the mail as a PR tool to call attention to the emerging Houston convention district project. The box also contained press releases from Houston First, announcing the opening of “Texas’ largest convention campus.”

The collateral proclaims that “With a $1.5 billion facelift, Houston’s Tex appeal is growing by the minute.” Wow. Tex Appeal. Now that’s sexy.

When all the pieces of the reinvigorated Houston convention district are complete by the end of 2016 or early 2017, the complex will feature a new five-block plaza with a stage for concerts. The pedestrian-friendly Avenida Houston will host outdoor gatherings for convention attendees, offering 99,000 sq. ft. of space, and will connect meeting-goers to such popular attractions as Minute Maid Ballpark, Toyota Center and BBVA Stadium.

One of the key new components of the project is the 1,000-room Marriott Marquis Houston, which opens in November. It will be connected to George R. Brown Convention Center via skybridge. But it will probably better known as the hotel with the Texas-shaped lazy river. It’s important to note that the Marriott will have 100,000 sq. ft. of meeting space.

The second anchor hotel connected to the convention center by skybridge is the existing 1,200-room Hilton Americas-Houston. The Hilton offers more than 90,000 sq. ft. of event space.

The Houston convention district includes the 12-acre Discovery Green park, which can be used for concerts in the summer and offers ice skating in the winter.

Other cool enhancements throughout the Houston convention district include the addition of trendy restaurants that are opening on the ground floor of the convention center adjacent to the plaza. Ten locally created art installations are part of the renovation, creating a backdrop designed to bring out the best in convening groups.

“Houston is one of our nation’s cultural capitals, home to world-class museums, acclaimed art galleries and a huge community of talented artists,” Houston Mayor Sylvester Turner says. “Infusing Houston’s vibrant art scene into Avenida Houston will serve not only residents, but also provide visitors with a glimpse of Houston that we hope will leave a lasting impression.” 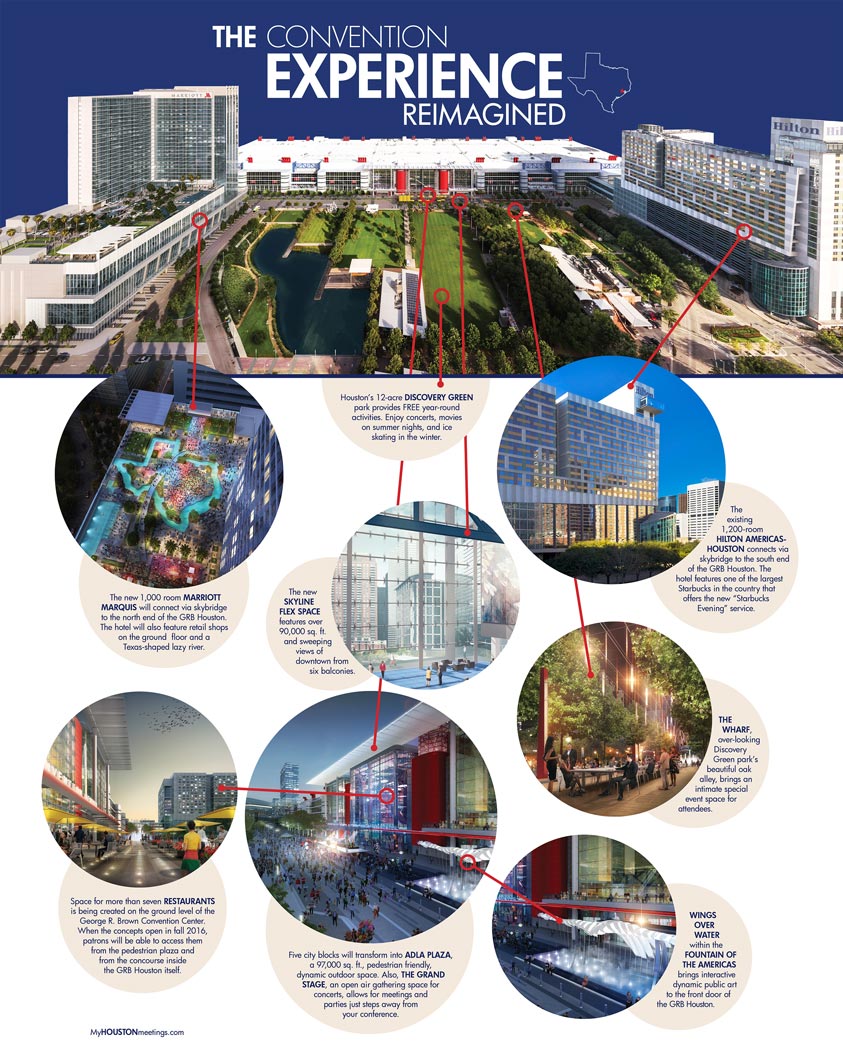