This year, 44 venues from the United States, Canada, Germany, France, Switzerland, the Netherlands, Singapore, Australia, Thailand, China and India participated in the 142-question Green Venue Report survey, providing the most comprehensive collection of results yet on topics ranging from food waste to energy efficiency and sustainability.  All of the participating venues hold a sustainability certification or accreditation.

Perhaps one of the most uplifting trends is the rise in the actual reporting of these green standards. More venues are reporting their efforts and recording their waste numbers so that they can measure their progress year to year and also so that planners who want to host meetings in green venues can evaluate the venue based on the center’s practices.

More convention centers and other venues are getting creative with ideas to efficiently use once-wasted space, by converting roofs, for example, into green roofs, bee sanctuaries and gardens. (We’ve noticed this trend taking place with hotels, too!)  Additionally, 11 percent of venues have an apiary on their roof. 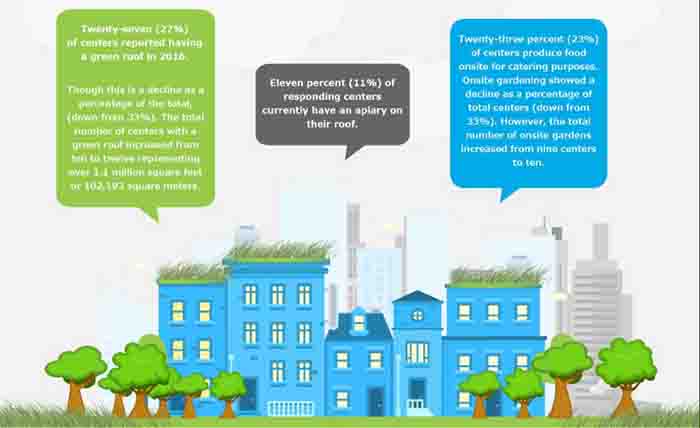 Venues Leading by Example: The Colorado Convention Center in Denver boasts 5,000 sq. ft. of garden onsite that produces fruits, veggies and herbs as well as beehives.

Venues are also getting more creative with how their catering departments can help the waste-reduction effort, by donating food, recycling kitchen grease tracking production waste, overage and spoilage.

The role of sustainability manager/coordinator has doubled from one year to the next, proving venues are making a serious commitment to sustainability. 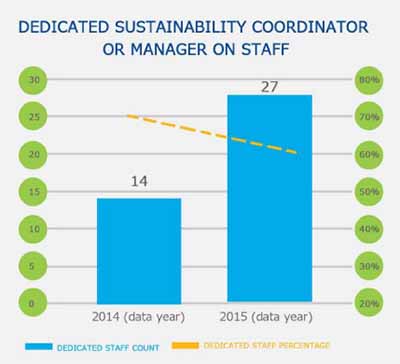 Fifty-seven percent of the conference and convention centers polled have active manual waste-sorting programs in place.

On average, thirty-four percent of event planners answered that they discussed sustainability when talking with a venue in 2015, which is itself a 27 percent growth from the previous year. 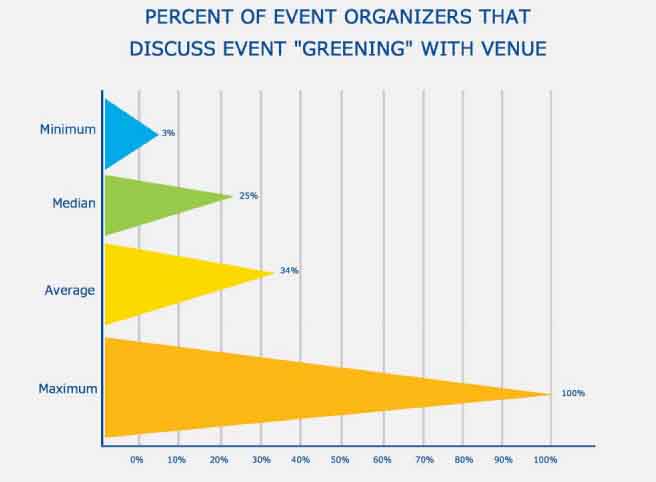 Nearly half of the venues responded that they use solar panels, wind turbines or some other form of renewable energy technology. 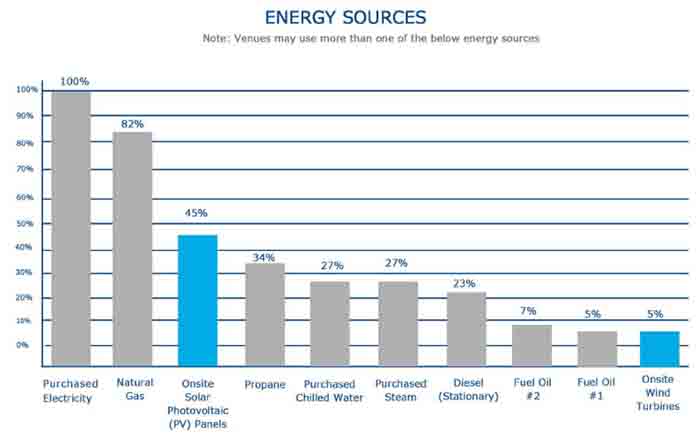 Venues Leading by Example: Mandalay Bay has an extensive waste management and recycling program, and offers planners the opportunity to not only sort their waste and recyclables from a particular event, but measure and report it. The center also boasts 26,000 solar panels on its roof, which will annually generate the equivalent energy needed to power 1,340 homes for a year.

Saint Paul RiverCenter in Minnesota offers WindSource for Events, a renewable energy program that allows planners to choose to offset energy usage with the purchase of wind power in the region, thanks to 20 different wind farms in the state.

Seventy-nine percent of venues are able to provide a waste diversion report to planners upon request, and 60 percent do so at no added cost.

According to the survey, nearly all venues were able to provide annual impact data for their use of energy, water and waste.

Eighty-one percent of respondents said they track food waste management, including the amount of overage and spoiled food for events. An impressive 93 percent compost food waste.

The Pennsylvania Convention Center uses a service called EnerNOC to track real-time electricity use and other metered data, which can be provided to planners looking to meet a specific budgeting or output goal.

Ninety-three percent of venues reported that they’re accessible by train, light rail or subway with an average distance of one mile.

86 percent claim to have public bike racks; 64 percent are within a half-mile of a city bike share station; 64 percent offer charging stations for electric cars; and 26 percent offer programs that encourage mass transit for event attendees.

Venues Leading by Example: The Palexpo in Geneva, Switzerland, provides all visitors arriving at the airport with a free ticket that’s good for ninety minutes of transportation to their hotel.

Steps to a Greener Tomorrow

Green View, the organization that publishes the Green Venue Report, suggest 4 steps for venues to take for more sustainable events:

After years of Zoom meetings, this year’s travel is Go Big. This trends is also spilling into the meetings world. New England hospitality professionals are seeing dramatic upticks in leads. Incentive professionals are addressing this welcome trend by going one more step.