The massive American Society of Clinical Oncology (ASCO) citywide conference in Chicago was a true win-win-win. A creative partnership between ASCO, the host city Choose Chicago and the Chicago Cubs organization resulted in a meaningful conference to raise funds for an important cause, highlighted the unique experiences in the destination and left everyone feeling better. The architects of the innovative program shared some insights with the Destinations International Convention Sales and Services Conference audience and will expand on the following in this presentation:

Andy Blackburn joined the Cubs in June of 2010 and was promoted to Vice President, Strategic Partnerships in November 2018. He is responsible for strategic new corporate partnerships and hospitality with the Chicago Cubs, Marquee Development and non-gameday events across the Wrigley Field Campus. Andy’s responsibilities also include new business affiliations for Marquee 360 including partnerships with C3/Live Nation, the PGA Tour, and Northwestern Football at Wrigley Field. He brings with him over 20 years of media and sports sales experience, including time as director of customer sales programs and sports sponsorship at Time Warner Cable Media, affiliate sales at ESPN and The Walt Disney Company. He graduated from Miami University in Oxford, Ohio, in 1998 with a marketing degree.

Mandy Davis began her career in American Society of Clinical Oncology program support and joined ASCO’s Meetings Services department in 2006. From 2006 to 2017, she oversaw all aspects of ASCO’s Annual Meeting, including exhibits, registration, housing, and logistics. In 2017, she assumed the role of Vice President and is responsible for overseeing ASCO’s meetings program, including the ASCO Annual Meeting, nine symposia and workshops and ASCO’s conference center.  Her focus is on ensuring that ASCO meetings follow current best practices and consistently incorporate member feedback and innovative technologies that adapt to the evolutionary needs of ASCO members.

Rose Horcher brings nearly 40 years of experience in the convention and hospitality industry, including managing conventions of up to 90,000 participants for associations and corporations such as Sears Holdings, and the National Sporting Goods Association. She has work in third party management at Bacon Hedland Management and Conferon, housing at Expovision, shipping at BAX Global and services as Director of Tradeshows for the National Sporting Goods Association. Her diverse skillset also includes successfully managing logistics, operations, sales, sponsorship and client services. For over 16 years she has led the Choose Chicago Client Services team and nearly 100 volunteer industry Ambassadors committed to creating memorable Chicago experiences for their customers.  Serving as “city experts”, her team services over 80 city-wide conventions and meetings annually with an estimated annual economic impact of over $1 billion to Chicago’s economy. She is Choose Chicago’s primary liaison between convention clients and Chicago’s civic and corporate organizations who collaborate with Choose Chicago to create a positive, welcoming experience for convention attendees. She spearheads Choose Chicago’s Connecting to Chicago (C2C) initiative, tapping into Chicago’s vast intellectual capital to increase convention attendance and to garner increased participation by local civic organizations, corporations, and associations throughout the Chicago area. A graduate of the University of Arkansas with a BA in Journalism, Rose also earned her CEM, CMP and CGSP industry designations. She has served as a guest speaker at Kendall College, Roosevelt University, Loyola University, DePaul University, and Purdue University. Active in PCMA and IAEE, Rose served as past Chairman of the Midwest Chapter of IAEE. She has also served on multiple PCMA local and national committees. Her industry acknowledgements include being awarded the 2012 Professional Convention Management Association’s Distinguished Service Professional Award, the 2012 recipient of the Greater Midwest Chapter PCMA Dick Daignault Award, and was a PMCA 2020 Visionary Award Supplier of the Year finalist. In 2020, Rose was awarded the MPI CAC Kathy Osterman Lifetime Achievement Award. For the past seven, Rose has enjoyed serving on the Executive Board of the Andrew Weishar Foundation, a not-for-profit that has raised over $2 million for children and adolescents battling cancer and is an active fundraiser for the Multiple Sclerosis Association, having participated in multiple 50 mile walks around the country to raise funds for MS research.

Brad Weaber is a veteran of the meetings industry with over 30 years of executive management roles. He is the founder and principal of the Brad Weaber Consulting Group, a firm focused on leadership motivation through his work as emcee and keynote speaking, virtual and live speaker coaching, professional board and panel facilitation as well as management efficiencies and event strategy review for all market segments. He served as COO for Connections Housing; executive vice president of New Orleans Convention and Visitors Bureau; executive vice president at Smith Bucklin; and executive vice president and chief customer officer for Experient. He has been active with American Society of Association Executives, International Association of Exhibitions and Events, and Professional Convention Management Association. He has served on advisory boards for cities and hotel properties including Marriott, Hilton, Omni and the cities of Las Vegas, Washington, D.C., and Vancouver and as a featured speaker at industry events, and a frequent trade publication contributor and industry expert quoted in both the New York Times and the Wall Street Journal.

More educational webinars are available at Smart U

BROUGHT TO YOU BY 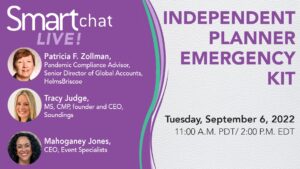 Tuesday, September 6, 2022 | 11:00 a.m. PT/2:00 p.m. ET
The role of independent planners has evolved as lean planning teams call on experts for everything from finding venue availability to understanding local protocols and strategy. We explore new ways… 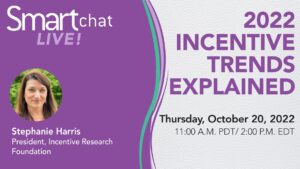 Thursday, October 20, 2022 | 11:00 a.m. PT/2:00 p.m. ET
How are companies motivating and rewarding employees in the wake of the pandemic? Stephanie Harris, president of Incentive Research Foundation will share results from the annual survey and drill down…