When John Walsh, general manager of The National Conference Center, started preparing the legacy Leesburg, Virginia, meetings venue for its newest clients, he knew he was in for a life and palate-changing experience.

This year, one of the country’s largest and most comprehensive conference centers (originally planned as a Xerox learning campus) became a partner with the U.S. government as part of Operation Allies Welcome (OAW). The program at The National began in February and is set to run through September 2022. The goal is to resettle over 30,000 allies from Afghanistan consisting of journalists, human rights activists, humanitarian workers and others who supported the U.S. military and civilian personnel in Afghanistan. 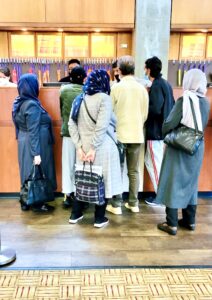 For John Walsh and his staff, that meant transforming the 1 million sq. ft. of conference space, including 250 meeting spaces into housing, schools and learning centers for English and other skills for over 1,300 of the program’s guests, many of whom would soon be moving from the Center to new homes around the country.

A huge part of this massive project was turning the conference center’s state-of-the-art food and beverage resources into halal kitchens that serve up to 4,000 meals a day.

“For us at the Center it’s been a great experience. Something we never imagined would end up being so big,” says Walsh. “It’s a great feeling to be able to help people who fought the war with us settle in their new home.”

Walsh says that part of what is provided during their stay along with pod-centered, family-style accommodations is job training as well as daily school for boys and girls.

The center has also repurposed some of their outdoor space to become a soccer field and there is even an on-site hospital.

A Passion to Get the Taste Right

But the process of creating a completely halal kitchen along with pitch-perfect Afghan cuisine is what Walsh feels transformed not only the conference center but his staff as well.

“We started researching Afghan cuisine early on,” he says. “We went to Afghan restaurants in the area to taste the food and then worked with the local ADAMS Center Mosque (All Dulles Area Muslim Society) in Sterling, Virginia, which was helpful in helping us get the foods and flavors just right.”

Frank Estremera, the National’s executive chef, played a pivotal role in the transformation.

“For Frank, it’s about passion,” says Walsh. “He’s always looking to learn new things and make them wonderful. He’s really done the homework and learned so much from our cultural liaisons. It’s all about passion and the energy that puts into our delivery.”

In a press conference reported on by Loudoun Now, ADAMS Board of Trustees Chairman Rizwan Jaka said, “They have great cultural food. Their chef and their dining team made great Afghan food, kabobs. They have a great dining hall. They have computer labs, immigration conference rooms to get help with immigration, they have supply stores where people can get for people that need clothing or diapers or formula. There are so many kids and they’re all just so happy,”

Walsh, Estremera and team are looking forward to taking their new lessons in global cuisine a step further.

“I think it’s made me and my team very humble and very appreciative for what we have in the U.S. and at the same time very fortunate to understand what these folks have been through, what they’ve done for us and what their goals are as new citizens. After we’ve converted back into a meetings facility again, we hope to keep our Afghani cuisine going so our lessons in halal and global tastes will continue.”