Pandemic disruptions are creating holes in the workforce as organizations lay off employees by the thousands, but ASAE President and CEO Susan Robertson, CAE, thinks associations can be part of the solution. She is not alone. Impact Every Day, a study released Monday by ASAE Research Foundation to mark the centennial anniversary of The Center for Association Leadership, found that two out of three people say education will play a very or extremely important role in the future of associations

Members demonstrated their hunger for information with their cursors this week—13,355 people, a record number for the annual event, registered for 2020 ASAE Virtual Annual Meeting & Exposition, which runs Aug. 10-12.

#ASAE President and CEO, Susan Robertson, CAE, just shared that the 2020 ASAE Virtual Annual Meeting & Exposition has 13,355 registrants! The LARGEST number of attendees in the 100 year history of the event!! #ASAE20 pic.twitter.com/V8kr4ltYw3

First, the conference. Robertson announced in June that the event originally scheduled for Las Vegas would be virtual and free. “We did that to give people the opportunity to participate who have never attended and ensure ROI for our vendors,” Robertson said. Of the 13,355 registrants, more than 9,000 were participating for the first time.

Keynotes were booked as global voices for doing the right thing. Leon Logothetis kicked off the event. He is a global adventurer and host of “The Kindness Diaries,” traveling the world relying on the kindness of strangers and giving life-changing gifts. Shiza Shahid, co-founder of Our Place and Malala Fund talked about the extraordinary impact individuals can create. And Duncan Wardle, a veteran head of innovation at Disney and founder of Innov8, shared a call to innovate during times of crisis.

The event was a mix of recorded segments with live Q&A interaction. All ASAE conferences for the rest of the year will be virtual. The annual was produced on the Intrado Digital Media INXPO platform and included a career center and partner playground. “It was designed to make people feel engaged and vary the experience,” Robertson said. Because it marks ASAE’s 100th anniversary, Robertson wanted to focus both on the lasting impact of associations over the last century and how they can support members in the future.

All ASAE conferences for the rest of the year will be virtual. And ASAE will continue to offer member webinars and Just in Time programs throughout the year. Beyond that, Robertson says, future conferences, including the 2021 Annual Meeting & Exposition scheduled for Aug. 14-17 at Kay Bailey Hutchison Convention Center in Dallas, will probably have a multichannel approach, including in-person, virtual and other delivery methods—and there will likely be a charge. “We can’t do everything for free, but we need to provide experiences that are focused, relevant and affordable,” she says.

Event insurance and a possible dip into reserves next year could help make up for the loss of event revenue for this year.

The “Impact Every Day” study focused on case studies, surveys and interviews with the association community and included outside stakeholders to determine where the industry can position itself to meet future challenges. “The largest contributions of associations have been in education, and [respondents to the survey] would like to see organizations invest more effort in other areas, particularly workforce development,” reports Sharon E. Moss, Ph.D., CAE, president of ASAE Research Foundation. 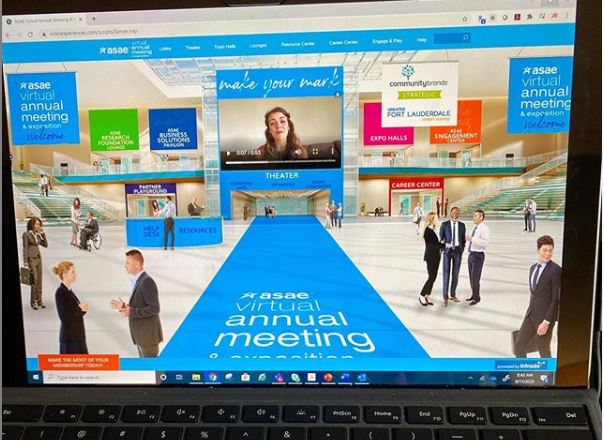 The report showed that more people are looking to associations to play key roles in education, safety and protection, and the economy and workforce development.

More than three-quarters of respondents said associations need to play a very or extremely important role in education (improving the knowledge or education of the American workforce, promoting ethical behavior and supporting mentoring opportunities), compared to 56.1 percent who said they had played that role in the past.

When it comes to protection, 75.2 percent said the same thing about promoting trust in American institutions, working or developing infrastructure to protect digital privacy, influencing legislation and regulations that affect the field and setting standards and addressing inequalities, compared to 53.5 percent saying associations played very or extremely important roles in those areas in the past.

Finally, in the area of the economy, 76.3 percent say a very or extremely important role for associations is attracting competent people into the field, and promoting greater public awareness of contributions in the field, compared to 51.1 percent who said this was a priority in the past.

Through The Power of A, ASAE is lobbying to include 501(c) (6) associations in COVID-19 relief packages. The lifeline is included in the House-passed HEROES Act for organizations with 500 or fewer employees, but not the Senate HEALS Act. “Some associations may not survive without that help,” Robertson warned as many rely on their major meetings to fund their work for the year.

Robertson also held out hope for the Skills Renewal Act being floated to help with retraining, something that is core to the missions of many associations and will be important during a time when so many have lost their jobs.