Spain will see an influx of German tourists very soon. Why? During a two-week trial, which begins June 15, Spain will admit thousands of German tourists to its Balearic Islands, which includes Mallorca, Ibiza and Menorca, to test their tourism industry’s new tourism regulations before July 1, when international tourists will officially be able to visit the entire country.

More: How Will We Travel After COVID-19?

In collaboration with German-based tourism firm TUI Group, other tourism operators and several airlines, up to 10,900 Germans will be allowed to visit the islands without having to go into a 14-day quarantine.

This news came the same day that Friedrich Joussen, CEO of TUI Group, forecasted that, this year, Spain will see “around half the usual” number of German tourists of a typical summer, or about 5 million. Passenger travel around the world this year has declined by about 95 percent, a dip of $820 billion in revenue, according to a study by Global Business Travel Association. 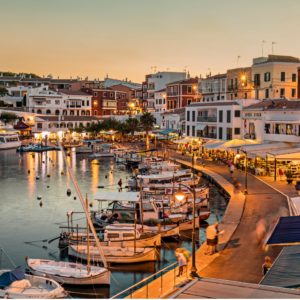 Germany’s virus death toll has been relatively low compared to other European countries, which is a primary reason why Germany was chosen, says Francina Armengol, president of Spain’s Balearic Islands. Germany was also one of the first countries to reopen, having restarted schools, churches and businesses in mid-March, and it is set to reopen its borders to the EU on June 15.

Other EU countries are not far behind. France will continue to place a two-week mandatory quarantine on incoming travelers, with the exception of EU or United Kingdom citizens, until at least July 24. In the U.K., school is back in session and citizens are allowed to meet outdoors in groups of six but travel by U.K. residents to mainland Europe and other countries remains restricted.

German travelers will not be required to undergo health checks but will be asked to complete an on-board questionnaire to identify anyone who may have contracted the virus. Visitors will then be able to proceed to their respective destinations for a maximum of five nights. Night clubs will remain closed until further notice.

As visitors deplane, they will be required to have temperature checks and will be given information on Spain’s social distancing and mask-wearing rules. Health authorities will also give travelers a phone number to call in case they begin to show symptoms, with tests for both those who are suspected of having the virus as well as close contacts.

While the Balearic Islands opening is just a test, it mirrors the agreement between Baltic countries Estonia, Latvia and Lithuania to create a “travel bubble,” a first-of-its-kind agreement which began on May 15. It allows citizens to travel between the three countries without needing to quarantine, even though travelers from other countries are still required to self-isolate for two weeks. Since then, a similar agreement between Australia and New Zealand has been struck. A travel bubble between France, Germany and Austria is under discussion.

According to Spanish newspaper El Pais, The Canary Islands are considering a similar test, although no specific plan has been agreed upon.