Sneaky airline fees have become so standard that it’s hard to call them “sneaky” anymore. The trouble, critics say, is that when you price out fares on websites like Priceline or Kayak, the cheapest flight often doesn’t disclose all those pesky little add-ons that would make the lowest price actually the more expensive option. “Upgrades” like a fee for a carry-on bag or picking your own seat.

Say what? We know. As meeting planners, those extra costs for basic service expectations can really hurt your bottom line. Enter Hopper.

The popular travel app launched in 2015 promising not only to track airfares, but to also send you alerts on price changes with the ultimate goal of predicting when to book to get the best price. Hopper also suffered from the same issue as the other big travel sites: hidden fees. What could a data-tracking travel app do? The answer is surprisingly simple: Be upfront about all the fees. Genius! 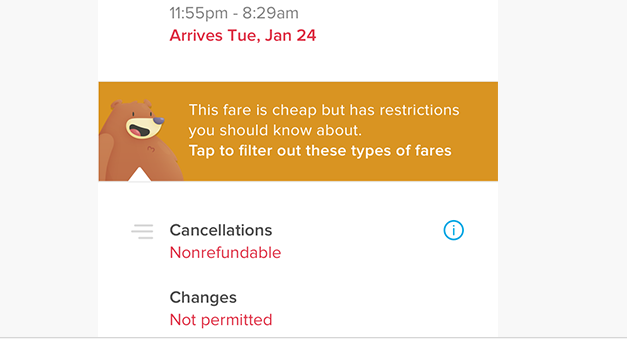 Hopper recently introduced the Fair Bear (for any child of the 1980s, the uncanny resemblance to Care Bear is purely coincidence, right?), who tells you that the fare you see may look cheap, but maybe it’s really not.

On the app’s Trip Summary page, the Fair Bear swears to warn you of any extra costs due to cancellation, flight changes, carry-on bags, checked bags and seating.

As Hopper said in its announcement of Fair Bear: “It’s tough to figure out your true cost of flying because the airlines are increasingly ‘unbundling’ their offerings.”

And considering that the airline industry made $67.4 billion last year alone on those extra fees, it seems the market will just get more unbearable.