Many meeting professionals and conference attendees have disabilities. Some affect mobility, while others involve vision and hearing impairments. Other conditions are invisible to the naked eye.

Sixty-one million Americans (one in four adults in the nation) have a disability that interferes with their ability to perform certain life activities the same way able-bodied people can, according to a report released by Centers for Disease Control and Prevention. The ratio goes up for people age 65 and above.

Whether you’re planning a conference in which guests have disabilities or fall into this category yourself, it’s important to know how to select accommodating facilities and activities. When guests register, make sure to properly and politely inquire about limitations to curate an inclusive itinerary.

More: Accessibility Rules: How to Make Everyone Comfortable at Event Venues 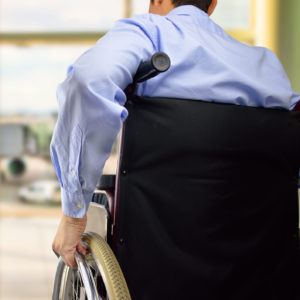 During a site tour of the brand-new Hyatt Regency Seattle, which opened last month, hotel representatives emphasized ramps throughout the property, rather than chair lifts. It provides a more seamless experience for wheelchair-users to navigate the lobby and other common areas.

This is the type of feature Brett Heising, founder and CEO of BrettApproved.com, looks for at hotels and restaurants. The user-generated platform has 30,000 users and is similar to Yelp, but places an emphasis on positive and constructive reviews. Collected data is analyzed by a secret, sophisticated algorithm to assign the venue a “brettscore.” Hotels looking to improve can invite Heising to stay on property to conduct an audit and provide feedback.

The number of accessible guest rooms in a hotel must adhere to standards set by the 2010 Americans with Disabilities Act (ADA), based on hotel size. If your conference requires multiple ADA-compliant rooms, Heising suggests selecting a city with large hotels, such as Phoenix or Las Vegas. Rent a ballroom with a capacity that exceeds the number of guests so there’s extra space for wheelchairs to maneuver. It’s also important to find which specific features attendees require to be comfortable. Not all accessible rooms have roll-in showers, for instance.

“In a perfect world, moving away from accessibility and toward universal design is my dream,” he says.

A Wisconsin man with cerebral palsy, Gabriel Schlieve, developed Rebel Traveler’s Guide to the World app to provide a database of accessible venues, businesses and attractions. Mostly focusing on mobility and vision issues, results are filtered depending on the disability’s limitations. He’s collecting data from tourism bureaus, businesses, organizations and users.

“[Meeting planners] could create a profile of the group, sign in, type in the city and be given hotels and restaurants that met that groups accessibility needs,” Schlieve says. “Many hotels say or think they are accessible, but still have barriers. Even a few stairs can be a barrier for a person who has no use of his or her legs or does not have the strength in their legs to climb stairs.”

The app has a free version and a paid-for premium version with additional features. Schlieve plans to launch a beta test this winter with full release in the spring, beginning with Eau Claire and Twin Cities, both in Wisconsin, and Chicago. He hopes to grow this on a global scale.

Seeing the World Through Your Ears

This free iPhone and Android app was designed by Boni Global for people with sight loss. It aggregates maps and radio signals to provide step-by-step audio guidance to a desired destination, such as emergency exits, restrooms, food court, ATMs, first-aid, trade-show booths, keynote speakers and education sessions. It tells users the distance from point A to point B and uses a clock-face reference to provide direction. People are informed of stairways, elevators, escalators and corners.

“We believe this innovative accessibility technology will set a new standard and become a real step forward for the hospitality industry. It’s an elegantly simple solution for providing ‘barrier-free’ directions,“ says Eric Potter, director of applied innovation at Waterton, the real-estate company that manages the hotel. “With an estimated 10 million Americans blind or visually impaired, we sense a tremendous opportunity to expand this cost-effective service to the dozens of hotels we manage nationwide.”

Talking with Your Hands 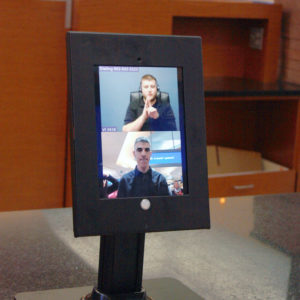 Not everyone speaks with a voice and listens with ears. The deaf and hard-of-hearing community speaks with hands and hears with eyes. In September, Phoenix Sky Harbor International Airport (PHX) installed five video-relay service tablets to assist travelers who are deaf, hard of hearing or have speech disabilities. (Five additional tablets will be added by the end of this year.)

The tablets provide free access to apps—such as Ntouch, P3, CaptionCall and Convo—that allow users to interact with an interpreter via a video call. The interpreter communicates through American Sign Language to answer questions about the airport.