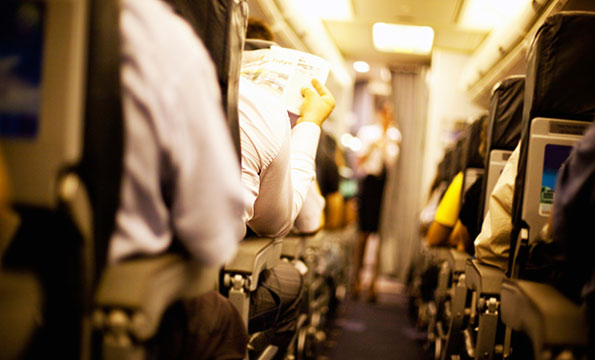 Airline seats have been getting progressively smaller. A consumer advisory group established by the U.S. Department of Transportation recently examined this issue and made non-binding suggestions to government regulators about the potential dangers of the industry trend.

As Scott Mayerowitz reports for the Associated Press, the shrinking space on airplanes is not just uncomfortable— it can be hazardous. He notes that today’s passengers are, on average, larger and heavier than those of yesteryear, and aircrafts fly with more passengers onboard than ever before.

When seats are packed closely together, it becomes more difficult for passengers to evacuate in the event of a crash. According to Mayerowitz, regulations state that everybody must be able to evacuate within 90 seconds, with half of the exits blocked. But an FAA researcher testified that tests are conducted on planes with 31 inches between each row of seats, and most jets today have less legroom. (Spirit Airlines, for example, has 28 inches.) The FAA insider also noted that the agency’s tests are not conducted under realistic conditions. The passengers know that an evacuation is forthcoming, are all physically fit and are dressed in athletic clothing. The cabin is not filled with smoke, nor is human panic is not factored in.

In addition to evacuation concerns, shrinking space on airlines increases the risk that passengers could suffer deep vein thrombosis, especially on long flights, because it is more difficult for them to get up, walk around and stretch. It is especially challenging for those in window seats.

Some believe the shrinking space on aircrafts borders on being inhumane. As one industry expert points out, the government sets standards for dogs flying as cargo on planes, but does not dictate similar minimum space standards for passengers.