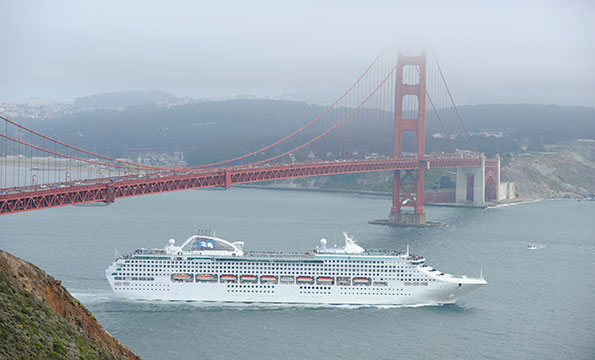 In anticipation of Dreamforce, one of the largest annual tech conferences, Business Insider reported this week that Salesforce is looking to a luxury cruise ship for accommodations. Salesforce has chartered the Dream Boat to house its large roster of attendees and keep the event in San Francisco. Last year the cloud computing company drew 135,000 attendees to its Bay Area headquarters. Locals have come to expect the massive show—which takes place this year September 14-18—to choke up traffic and fill up hotel space already at a premium.

To alleviate the strain, the Dream Boat, in partnership with Celebrity Cruises, will dock at Pier 27 during the conference. Guest rooms—with rates starting at $250 a night—will feature views of the bay and the city skyline. A premium suite with a veranda goes up to $850 per night. On deck there is Wi-Fi, a fitness center, multiple restaurants, lounges and nightly entertainment.

Each year, Dreamforce takes over all three of San Francisco’s Moscone Center’s halls, and multiple meeting venues in downtown hotels. The cost of entry to the blockbuster networking event is $1,099.

When most Americans think of the Fourth of July, they fantasize about family barbecues, community fireworks and local parades. It’s a time to enjoy the summer weather and celebrate veterans for their service. However, for millions of Native Americans alive today, the day carries a reminder of how their ancestors were gravely mistreated by European […]