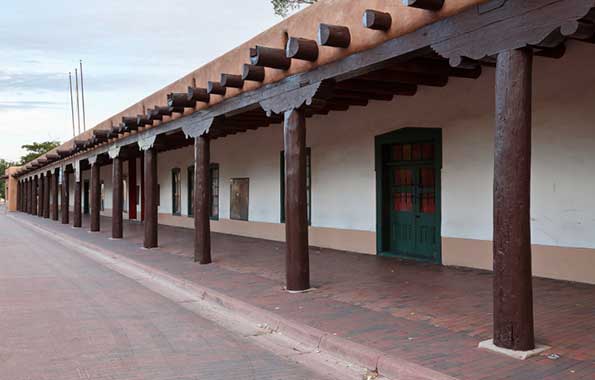 The Palace of the Governors in Santa Fe, New Mexico is the oldest continuously occupied public building in the United States.The historic structure, which features planked flooring and thick adobe walls, was just named a national treasure by the National Trust for Historic Preservation. It is hoped that this effort will raise awareness of, and money for, repairs on the 405-year-old building.

Often referred to as “the crown jewel” of New Mexico, The Palace of the Governors has played a significant role in state history. "This building is the end and the beginning of historic trails to Mexico City, to Kansas City, to Los Angeles and many points in between and beyond. For 400 years, The Palace of the Governors has been the governmental capital, the military command post, the commercial center, the religious headquarters, the transportation nexus and the cultural destination for millions of people," said history professor Jon Hunner.

After four centuries, however, the building is deteriorating. New Mexico Cultural Affairs Secretary Veronica Gonzales plans to ask the state legislature for a $1.5 million appropriation to leverage more than $3 million in private funding to pay for restoration work. Officials and history buffs believe its new designation as a national treasure should help raise funds.

Built in 1610, the building is located in Santa Fe's historic plaza. The interior features exhibits about New Mexico's history. Interesting artifacts include arrowheads that date back thousands of years, and an 18th century family tree that indicates that the city may have been settled by the Spanish before 1610. Outside, Native American artisans sell handmade wares to visitors.

For more about New Mexico, check out the new story in Smart Meeting’s February issue: