For event professionals, inspiration can be around every corner. After all, part of the job is facilitating transformational moments. Destinations International featured one of the most genuine motivators around at the Inspire Conference in Anaheim. Olympic gold medal-winning soccer forward Abby Wambach, whose keynote was sponsored by PCMA, had a leadership message worth sharing.

But first, more about her background. The now-retired soccer phenomenon is the world’s record holder for the most international goals—184—ever scored. That is not the women’s record. That is the most for anyone—male or female. This is a person who could kick a ball past the outstretched arms of a defending goalie and into a net better than anyone else. She could do this from age four.

She was a leader and role model throughout her career. And yet, she learned the hard lessons the way many of us do, through failure and sacrifice. As she contemplates her next chapter, this fierce competitor shared some of the lessons that guided her career and the challenges she has dedicated herself to tackling in the coming years. As we all reach for our own dreams in a shifting world, Wambach is a role model worth watching.

Wambach believes failure is not something to be ashamed of: It’s the highest-octane fuel your life can run on. Mistakes are how you learn, and losing is the best motivator for coming back stronger next time. In an address to the 2018 Barnard College graduating class that is now internet-famous, she quoted Michelle Obama’s advice that learning how to “fail-up” is a success secret that can be borrowed from the guys. In Wambach’s case, she learned from her role models how to use losses as inspiration. As she put it, “In order to become my very best—on the pitch and off—I’d need to spend my life letting the feelings and lessons of failure transform into my power.”

In typical Wambach style—with a sly grin and a revelation of a personal truth—she shared how some of her biggest disappointments were part of the journey to a bigger team goal. When she realized she was going to have to ride the bench in order to be the best resource for her team during the FIFA Women’s World Cup, she wasn’t happy. Actually, what she said was, “So, that sucked.”

The athlete in her wanted to play every possible minute in the game she had been training for all her life. But then she realized she could be even more valuable fresh, when her team needed her the most; and even more importantly, that she could lead from the bench with the right attitude. The same is true for nonathletes, she explained. “Lead from wherever you are,” she said.

3. Match Your Values with Your Actions and Time

This one has been particularly important as Wambach has transitioned to her new career as an activist and speaker. It is one thing to say that family and health are important causes, but only by spending time promoting them do you show they matter—and do you succeed. Put your energy where your priorities are. 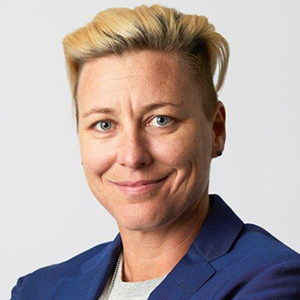 One of the values Abby Wambach is playing for now is gender inclusion. Like many young women, she said in her Barnard address that she was taught to be grateful. “I was taught to keep my head down, stay on the path and get my job done,” she said. Actually, the way this world-class athlete described herself growing up was a little more colorful: “I was freaking Little Red Riding Hood,” she said.

That fairy-tale depiction was not a positive one. It is the one in which girls are told to walk the straight and narrow and not ask any questions—or, they are warned, the consequences will be dire. A wolf will devour you and everything you love.

Luckily, Wambach finally realized she was not a helpless girl in an oversize cape. She was the wolf! She encouraged her audience to find their own inner Big Bad Wolf to live up to their true potential.

Or, in Wambach-speak, “It’s time to demand the ball.”

Once you figure out what to devote your life to, celebrate it—rather than making it a chore. That sentiment was echoed by outgoing Destinations International Chair Tammy Blount-Canavan, president and CEO at See Monterey, who sported a track suit and faux torch to hand off to incoming chair William Pate, president and CEO at Atlanta Convention & Visitors Bureau. “You have to make it fun,” she said. “That is how real work gets done.”