Come and get it!

Atlantic City’s dramatic rise as a meetings destination has made many groups aware of its offerings, including outstanding hotels, meeting facilities, entertainment and gaming. Groups also enjoy the city’s culinary scene, but mostly at hotel restaurants.

“If you want to eat where locals eat, there are dining favorites in nearly every neighborhood,” says Sandi Harvey, vice president of sales for Meet AC, the city’s destination marketing organization. “Atlantic City has a menu for every occasion—from fine-dining temples, celebrity chef-driven hideaways and upscale cocktail lounges to beer halls, biergartens and al fresco dining, along with vintage classics and local treasures.

“Many of the city’s dining establishments are well-equipped to create a special meal for large or small groups, served in private rooms, on communal tables, on chef’s tables and other unique arrangements.”

“Whether it be an appetizer, a main dish, a side or a dessert, Atlantic City restaurants are offering food items with a flair,” Harvey says.

Let’s take a dive into Atlantic City’s F&B scene, both within and outside of hotels.

Featuring upscale dining, Council Oak Fish is one of AC’s top seafood restaurants. It boasts fresh catches sourced from local fishermen—along with tableside caviar service and dry-aged prime beef cuts—on its a la carte menu, and much of it is prepared on a wood-fire grill. The intimate, elegant dining room is inspired by the bold aesthetic of Seminole tribal culture. Other features include a live music lounge, a wine tasting room, sweeping views of the Atlantic Ocean and private dining areas. It’s the signature restaurant at Hard Rock Hotel & Casino Atlantic City.

Excellent Italian restaurants include Capriccio and Angeline by Michael Symon. Capriccio, located in Resorts Casino Hotel, has an all-new menu of gourmet classics, including traditional antipasto and fresh pasta to complement an extensive array of seafood and veal entrees. Tables overlook the Atlantic Ocean in this restaurant, which also features an impressive selection of wines and desserts.

Angeline by Michael Symon at Borgata Hotel Casino & Spa features another Symon ode to timeless Italian fare. The Iron Chef and James Beard Award-winning chef offers simple, bold and fresh dishes—including favorites honed from family recipes, such as Mom’s Lasagna, the signature dish. In fact, every plate is tied to the Sicilian part of his heritage and personal history. Group dining menus are available for parties of 13 or more.
Four of the top Asian restaurants are Izakaya, Kuro, P.F. Chang’s Atlantic City, and Eastwind Chinese Restaurant and Noodle Bar.

At Izakaya by Michael Schulson, the inspiration Schulson gleaned from izakaya (traditional, casual pubs that specialize in snacks) during his time in Japan is fully evident, yet the restaurant offers a wide range of Japanese cuisine, including his signature sashimi, spicy tuna cracker—with avocado and toban djan, a broad-bean chili sauce—sushi rolls, robatayaki (Japanese-style barbecue) and sake. Groups can order everything from small plates to the chef’s full-tasting menu. Izakaya, situated in Borgata, offers group dining for 13 or more.

Situated in Hard Rock Hotel & Casino Atlantic City, Kuro is a new-style Japanese restaurant featuring contemporary, artisanal dishes using locally sourced ingredients imported from Japan. Menu items boast bold and complex flavors that are harmonious and designed with sharing in mind. Kuro’s also offers a selection of gluten-free and vegan dining options, as well as “menu mapping,” in which group members are asked a few, quick questions about their likes and dislikes, and a chef then prepares a series of dishes to delight their palates.

P.F. Chang’s Atlantic City, located at The Quarter at the Tropicana, serves a variety of Asian-inspired dishes, including wok-fired chicken and beef entrees, Vietnamese-style soups and bowls, traditional Chinese dim sum, hand-rolled sushi, and family-style noodles and rice. All are made from scratch every day. Those familiar with its other locations know that P.F. Chang’s has a loyal following for Chang’s Lettuce Wraps, Mongolian Beef, Chang’s Spicy Chicken, Crispy Honey Shrimp and Cecilia’s Dumplings. Large groups can be accommodated.

A Taste of Cuba’s Intriguing Stew

Other ethnic restaurants include Cuba Libre Restaurant & Rum Bar, which offers groups a passport to Cuba’s intriguing flavors and cultures. The restaurant’s name, which translates to “free Cuba,” signifies a hope for the future of the storied island nation—and it’s also the name of a well-loved cocktail built with light rum and Coca-Cola. At Cuba Libre, the cuisines of the island’s different ethnicities have been lovingly blended to create what is now the Criollo (home-style) cuisine of the island. True to this tradition, the restaurant mixes native ingredients and cooks in a style that adds flavors from South America, Spain, Africa, Asia and elsewhere.

For a taste of England, Michelin-lauded chef Gordon Ramsay has brought his pub experience to the Jersey shore. Gordon Ramsay Pub & Grill in Caesars Atlantic City Hotel & Casino features British pub faves such as Scotch eggs, shepherd’s pie, and ale-battered fish and chips, as well as seasonal dishes that showcase the Atlantic City area’s freshest fare and ingredients. And, of course, no Ramsay menu is complete without his renowned Hell’s Kitchen Beef Wellington. The restaurant’s centerpiece is a bar with more than 26 beers on top and 22 bottled beers from worldwide and local breweries, as well as unique crafted cocktails. Private dining for up to 60 people and large party bookings for up to 250 are available.

During its 75-year history, White House Sub Shop, located in the Ducktown neighborhood, has served an unending flow of hungry locals and visitors, including a staggering list of elite celebrities that includes The Beatles, The Rolling Stones, Frank Sinatra, Ellen DeGeneres and Muhammad Ali. One of the owners attributes the modest shop’s success to its high-quality meat, fresh-baked bread and great staff. The top seller is the Regular Italian, featuring capicola, Genoa salami, ham, provolone cheese, lettuce, tomato, onions, optional hot peppers, oil and vinegar, and Italian spices served on a fresh roll. The sub shop also has a restaurant inside Hard Rock.

Part of the rebirth of Atlantic City and the growth of The Orange Loop—three beach blocks of restaurants, bars, live music and more—Bourre Atlantic City has transformed an old gentlemen’s club into an industrial New Orleans-themed pub featuring Cajun barbecue, free live music and themed spirits. It’s located just steps from the boardwalk and offers a huge outdoor space showcasing a large barbecue smoker, outdoor games and a 40-foot-long, shipping-container bar. It also features a spirited and varied open-mic night every other Tuesday and a drag brunch featuring female and celebrity impersonators one Sunday per month. Bourre can be reserved for group events. 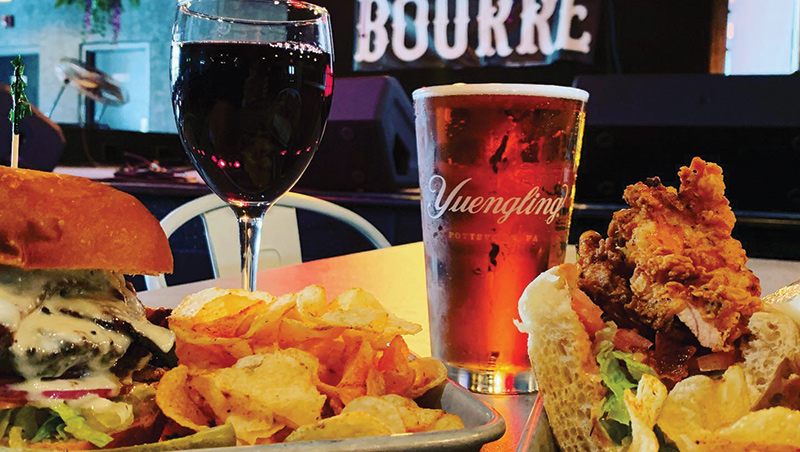 Tennessee Avenue Beer Hall, also near world-famous Atlantic City Boardwalk and beach, offers more than 100 craft beers on draft and by the bottle, as well as favorite go-to brews. It features wine and cocktails, too, as well as steaks, hamburgers, hot dogs, salads, and an array of fish sandwiches and snacks. Group gatherings can be arranged.

Located in the heart of Atlantic City, Little Water Distillery is the city’s first and only legal distillery. Whiskey, rum, vodka and gin are produced there. Tours and tastings are available, and group events can be arranged.

A unique culinary adventure is provided at Made Atlantic City Chocolate Bar. It’s a shop that takes chocolate to another level by infusing its own chocolate in cocktails and decadent desserts. It can comfortably seat 32 people in the bar/lounge area, and can accommodate up to 50 people in the entire space.

Harry “Doc” Daugherty opened Dock’s Oyster House, one of the city’s most famous restaurants, in 1897, and since then, three successive generations of his family have provided high-quality seafood to local residents and visitors. Located two blocks from the boardwalk, it continues to blend a classic oyster-bar feel with upscale dining and maritime touches.

The menu features long-time favorites such as Crab Au Gratin, Seafood Fry, Pecan Crusted Salmon and Crispy Wasabi Tuna, as well as a large selection of lobster and oyster dishes. A new private dining room can accommodate up to 60, and other areas of the restaurant can be used for semiprivate events.

Two excellent Italian restaurants are also longtime favorites of groups visiting the city. A Brooklyn family opened Cafe 2825, an Italian-American dining room located a block inland from The Quarter at Tropicana, in 1986. It sources fresh, seasonal ingredients to create dishes that stay true to the family’s Brooklyn and Southern Italian roots. Tableside experiences include burrata-style fresh mozzarella prepared straight from the curd. It’s sliced warm for your group, accompanied with sauteed tomatoes and topped with homemade, warm ricotta.

Situated in the city’s Duckworth Section, Angelo’s Fairmount Tavern is a rock of stability amid Atlantic City’s rapid transformation. It’s been open since 1935—flourishing under three generations of Mancuso family ownership. The restaurant features classic Italian food in a comfortable setting, and its three banquet rooms can collectively handle groups of up to 120.

Asia Plus Mexico, Old and New

Groups seeking adventurous Asian fare often head to Buddakan, which transports them to an ancient village of serene rock gardens, hand-woven thatched roofs and a ceiling that mimics a twinkling twilight sky. The dining room, presided over by a large Buddha, provides an ideal setting for enjoying the modern Pan-Asian menu, which includes influences from China, Japan, Thailand, Korea, and other Asian and Western countries. Groups can rent the communal table, which accommodates 28 guests, or the main private dining room, which fits 150 seated. A full buyout for up to 230 guests seated or 300 reception-style can be booked at this restaurant, located at The Playground.

Since it opened in 1978, Los Amigos Restaurant & Bar, another ethnic culinary favorite, has transformed from offering nachos and tacos to a whole host of creative Mexican and New Mexican-inspired dishes. The menu is based on recommendations of Mexican chefs and cookbook authors Diana Kennedy and Jane Butel. Highlights include a vegan menu as well as an extensive tequila list. It’s located in Tanger Outlets The Walk outlet shopping area, two blocks from Atlantic City Convention Center.

Atlantic City Convention Center was designed to incorporate and reflect Atlantic City’s seaside location. A recipient of the prestigious Award of Excellence in Architectural Design from Pennsylvania Society of Architects, it has 500,000 sq. ft. of exhibit space, including five large exhibit halls, 45 meeting rooms that collectively provide 109,100 sq. ft., and 32,000 sq. ft. of prefunction space.

Hard Rock Hotel & Casino Atlantic City opened in June 2018 in the spot previously occupied by Trump Taj Mahal. It underwent a complete transformation that included all 2,000 guest rooms, the 120,000-square-foot casino floor and the more than 150,000 sq. ft. of meeting space, including 29,757-square-foot Seminole Ballroom.

One of the city’s largest hotels, Tropicana Atlantic City offers 2,400 guest rooms, more than 122,000 sq. ft. of meeting space as well as 200,000 sq. ft. of dining, retail and entertainment experiences, including an IMAX Theatre. The 10,000-square-foot Sea Spa, which reopened in November 2018 after renovations, combines traditional services with a holistic approach to wellness and includes a co-ed solarium featuring a Jacuzzi, steam room, sauna and heated outdoor pool.

Harrah’s Resort Atlantic City Hotel & Casino, which offers 2,590 guest rooms and plenty of upscale dining, nightclubs, gaming and shopping, completed a redesign and enhancement of 507 guest rooms in Harbour Tower in July, renaming it Coastal Tower. The property features Waterfront Conference Center, with 125,000 sq. ft. of meeting space, including 63 individual meeting rooms and two 50,000-square-foot ballrooms that each have an additional 26,000 sq. ft. of prefunction space.

Borgata Hotel Casino & Spa, an MGM Resorts Luxury Destination, also has been busy sprucing up its property. After spending $12 million to open a new sports betting lounge and entertainment facility in June, it is investing $14 million to transform its lobby and more than 300 hotel suites. The lobby renovations were completed in September, and the hotel suites are slated for completion in early 2020. Located in Atlantic City’s Marina District, Borgata features 2,000 guest rooms, 161,000 sq. ft. of gaming, a 54,000-square-foot spa and 106,000 sq. ft. of event space.