When Specialty Food Association checks in 1,400 exhibitors and more than 80,000 products for the Fancy Food Show at the expanded Moscone Center in San Francisco the third week of January, it will be the realization of the dreams of generations of mayors, a decade of planning and creative logistics, and lots of input from event professionals.

The $551 million expansion, christened on Jan. 3, added 157,000 sq. ft. of space and created a massive, 504,941-square-foot contiguous area that connects the two existing buildings via an underground addition. This upgrade was accomplished in four phases over four years while events continued in the existing space behind a temporary wall and traffic flowed between the two buildings. 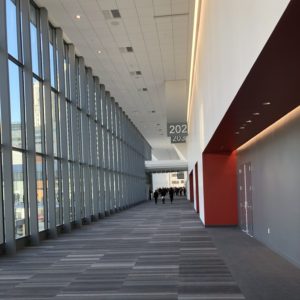 Two-thirds of the funding for the project came from a partnership with the hotel community,  and representatives were onsite Thursday to see the final project. “I am beaming, thrilled to be at the finishing line to bring world-class conferences here,” said Jon Kimball, area general manager for Marriott International.

City support came from a line of visionary leaders. The convention center, on the site of a former parking lot, was initially championed by (and later named after) Mayor George Moscone, who passed away in 1978, before the original ribbon-cutting in 1981. Moscone was remembered at the rededication as a man focused on inclusiveness and bringing people together. 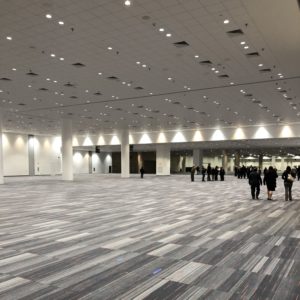 Later, Mayor Ed Lee took up the cause of expanding and modernizing so the city could continue to compete for large conferences and serve the needs of a growing tech community. He passed away in 2017 before the final touches were added. New San Francisco Mayor London Breed did the ribbon-cutting honors with an oversize pair of scissors at the ceremony on Thursday as the Jazz Mafia band played in the background. She officially welcomed the world to the jewel in the middle of the city. 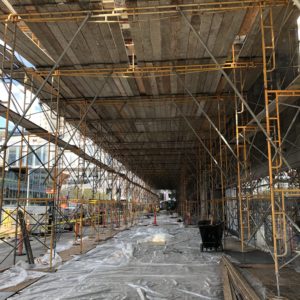 Event planners taking the initial tours of the building had a lot to admire. From the soaring, light-filled, prefunction lobby space and two 75-foot-long video monitors wrapping around the meeting space to four new major artworks, expanded Moscone center has a lot of curb appeal to make a memorable first impression.

Courtney Bales, director of event operations for Oracle Corporation, was eager to see the new 49,775-square-foot, column-free ballroom and the terraces that will leave no doubt in attendee minds what city they are in. A survey of event professionals prior to finalizing plans found that open space and flexibility topped most lists for potential tenants.

Nearby, Oracle Senior Director of Corporate Event Marketing Karen Galatis praised the environmental credentials of the building. Moscone is now home of the largest rooftop solar installation in the city, which will provide 20 percent of the building’s power. An innovative water recovery system will literally harvest fog from the air, along with storm and groundwater to reuse for landscaping and street cleaning.

“The green initiatives are something we look for in a venue because it aligns with our goals at Oracle,” she said before heading up the escalator to see for herself.