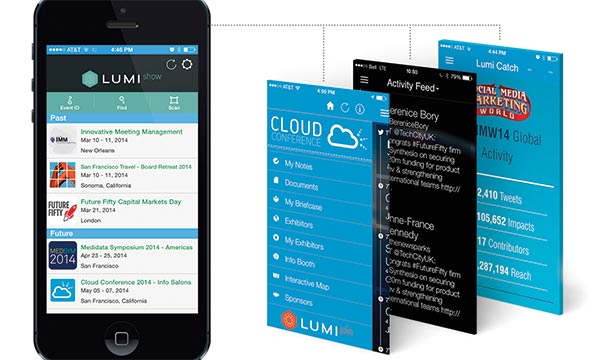 Event app maker QuickMobile has been sitting pretty since its founding in 2006. It built the first-ever mobile event app in 2008, and has created more than 3,000 since. Its content management system lets users create their own apps, add and edit content, and analyze data.

The Vancouver-based company serves 40 of the Fortune 100, and is the official app provider for, among others, Professional Convention Management Association (PCMA), Meetings Professionals International and IMEX.

Earlier this year, QuickMobile appointed Craig Brennan CEO, and immediately injected fresh energy in its quest to outpace rivals such as DoubleDutch, CrowdCompass and EventMobi. Brennan, who had been chairman of the board, is a Silicon Valley vet with more than 20 years of leadership experience.

We asked Brennan what differentiates QuickMobile from all the other event apps-makers out there. He was quick with four points:

Enterprise 2.0, launched in January, is its next-gen mobile app and analytics platform that makes it easier for companies to demonstrate meetings’ ROI by enabling them to link event data with other business data. Brennan notes that “$650 billion is spent on meetings and events. We need data to capture their value.”

QuickMobile is hardly alone in the race to innovate, as competitors push forward with their own new features. DoubleDutch, for example, combines social apps with data analytics, essentially creating a pop-up social network before, during and after an event; the company collects that data and delivers it to event organizers in actionable formats.

At the 2015 PCMA Convening Leaders conference in Chicago, for example, the Learning Lounge was powered by Freeman and gave attendees opportunities to discuss issues in depth and network with others. The five sections in the lounge (operational strategy, meeting and experience design, globalization, wellness and Tech Central) were brightly color-coded—including space dividers, signage and banners—for easy visual identification.

Session schedules were printed boldly on various dividers to optimize both otherwise “empty” wall space and the time attendees might have while sitting in a particular area. Smaller seating areas, in fact, were thoughtfully configured to encourage side conversation, and the Coffeehouse presentation area was inspired by open-mic setups: less sage-from-the-stage and more guided conversations.

A large board in a highly trafficked area of the lounge provided a space where attendees could affix Post-It notes to share feedback with PCMA and the Freeman meeting design crew.

Even in main ballroom presentations, the “fireside chats” set up on two satellite stages in the midst of the audience allowed speakers to sit in chairs facing each other and converse, rather than deliver their talks from the main stage.

Richard Reid, vice president of digital services for Freeman, says the high- and low-tech approach is a “conscious effort.” “We try to step back and contextualize the experience for the attendee,” Reid says.

“The Learning Lounge was a blended learning environment, an experiment in how concentrated you can make the effort (meaning the number of sessions going on at any one time),” he says. There were, in fact, complaints about noise bleed, with so many concurrent sessions. Going forward, Reid says he would “make more room to spread out sessions and put vendors and exhibitors in between, and add more seating areas.”

Technological innovations, of course, were well-represented in the lounge, including TV-like replay monitors where attendees could check out sessions they had missed; and recharging stations in areas that not only powered up devices, but offered seating so attendees could recharge as well. A green screen and camera were stationed just outside the main dining hall that captured individual attendees’ experiences.

And, as was expected, there were new tools and innovations showcased throughout the lounge.