Epic meetings in the heart of the Sunshine State

When Star Wars: Galaxy’s Edge opens this month at Disney’s Hollywood Studios at Walt Disney World in Orlando, it will be the latest in a long line of grand adventures to arrive in Florida’s heartland.

A long time ago (1965 to be exact) in a city not that far away (and originally known as Jernigan to honor the cattlemen who settled there in the mid-1800s), a man named Walt Disney decided Orange County, Florida, would be a perfect place for a theme park because it was not exposed to the vagaries of weather that hit the coast and enjoyed average annual temperatures of 72 degrees. SeaWorld Orlando followed in 1973 with animal shows and then roller coasters, and Universal Studios Florida joined the mix in 1990 with media-themed attractions.

More good stuff in on the way. A $605 million upgrade will add an enclosed connection between the North and South concourses, with more meeting space and a new grand entryway. Also included is a 200,000-square-foot, column-free space with retractable and floor seating.

A record 75 million visitors found their way to the destination in 2018—4.2 percent more than the previous year, making Orlando and Kissimmee America’s most-visited destination area. “We are in the midst of the biggest two-year period for hotel expansion in over two decades with the addition of 9,300 rooms between 2019 and 2020,” said Visit Orlando President and CEO George Aguel.

“Groups will gain even more connectivity and flexibility for their events in Orlando,” Augel said. A $1.8 billion south terminal expansion at Orlando International Airport (MCO) will add 19 gates and a palm tree-lined interior boulevard, a moving sidewalk that will span from gate to ground transportaion. More direct flights from Providence, Rhode Island and Paris—to name a few—will shorten the distance from doorstep to conference room as well. Smart Meetings tracked down some of the new and epic venues and best activities in Florida’s middle region. 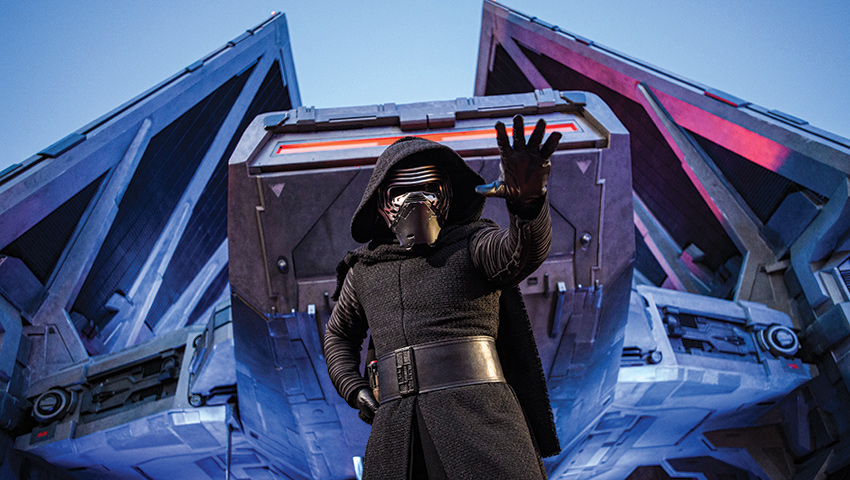 From wizards and avatars to puppets, to volcanos, opportunities for incorporating characters in your agenda abound.

Let’s start with the much-anticipated Star Wars: Galaxy’s Edge and what it means for event professionals. The new land will feature two signature attractions, Millennium Falcon: Smugglers Run, which puts guests in the cockpit for out-of-this-world team building, and Star Wars: Rise of the Resistance, where an escape from The First Order turns into a powerful leadership lesson.

The challenge for event professionals looking to include some of this buzz in their gatherings is that tickets have been sold out for eons. But beyond the rides, galactic action is around every corner.

At Disney’s Hollywood Studios, daily Star Wars: A Galaxy Far, Far Away shows feature Chewbacca and Darth Vader on stage in adventures that will take your group back to the magic of the original. Star Wars: A Galactic Spectacular laser and fireworks shows light up each night. Planners can pair these dramatic moments with themed desserts and drinks in special group viewing areas. Guided tours are also available.

Jedi battles are not the only new game in town. A new Sesame Street-themed land at SeaWorld Orlando is now open. Attendees can explore the iconic neighborhood and meet their favorite childhood characters.

At Universal Orlando, an all-new roller coaster ride is coming to The Wizarding World of Harry Potter–Hogsmeade at Universal’s Islands of Adventure. Groups can rent out the park after hours and pair attractions with food-and-beverage stations to create a magical attendee journey.

In phase one of Dezerland Action Park, a planned new 800,000-square-foot indoor entertainment and events museum complex, Orlando Auto Museum will open this year with one of the largest privately owned collection of automobilia in the world. Who needs decor when 100 television and movie cars line the walls and a go-kart track awaits?

Wild Florida Airboats & Gator Park is expanding in Kenansville with a zipline and drive-through safari, bringing visitors nose-to-snout with giraffes, wild boars and other exotic animals.

For cutting-edge team building, Epic Axe Throwing Orlando is a new way to introduce friendly competition to a group outing. New at Disney Springs is The NBA Experience, a food and interactive games immersion. For something completely different, The Orlando Forum’s Rock Dinner Show is a one-of-a-kind, dining and entertainment experience that brings audiences of all ages through a high-energy musical journey of the kings (and queens) of rock and pop—from Prince to Elvis to Katy Perry.

Stellar Places to Meet and Stay

Orlando is home to 121,000 guest rooms with more on the way. The four properties connected to the “center of hospitality” at OCCC each have their own personality. Rosen Centre offers 150,000 sq. ft. of meeting space, 1,334 guest rooms and Planner Perk incentives. Rosen Plaza rolls out the personalized service for up to 1,800 guests in 60,000 sq. ft. of ballroom and meeting space.

In this ever-growing area, no property lies dormant for long. Orlando World Center Marriott, the largest Marriott in the global company’s portfolio, offers more than 450,000 sq. ft. of meeting space, including the largest pillar-free ballroom in the United States. A recent renovation added six new breakout rooms, a lobby sushi bar and a secret speakeasy—an invitation-only experience for up to 45 guests.

Walt Disney World Swan and Dolphin Resort, fresh off a $150 million renovation that included redesign of all 2,270 guest rooms and 331,000 sq. ft. of meeting space, has broken ground on a new tower that will bring 22,000 sq. ft. of meeting space and primo rooftop firework-watching reception area by late 2020. The addition will add 349 new guest rooms—151 of which will be suites with advanced workspaces.

Over at Four Seasons Resort Orlando at Walt Disney World Resort, a massive renovation of Tranquilo Golf Club has made it more appealing to all levels of players.

Surfside Inn and Suites at Universal Orlando Resort opened this summer, the first of two new value hotels that will make up Universal’s Endless Summer Resort. Rates start at $100 per night, offering guests a more affordable on-site experience while keeping the perks of early park admission and resort-wide transportation. The sister hotel, Dockside Inn and Suites, will open in March 2020 with the same fun vibe.

Most exciting for those enchanted by the Force is the recent announcement that Disney will be building an interactive, boutique Star Wars-themed hotel, scheduled to open this year. The rooms will look and feel like a spaceship, and visitors will participate in an immersive experience, including costumes, lightsaber duels and flight lessons.

Also generating buzz, Disney Riviera Resort, the 15th Disney Vacation Club property, is expected to open in the fall with a rooftop restaurant that offers views of both Epcot’s and Disney’s Hollywood Studios’ nighttime spectaculars. The resort will be part of the new Disney Skyliner gondola line, connecting the hotel along with three other properties to Epcot and Disney’s Hollywood Studios. 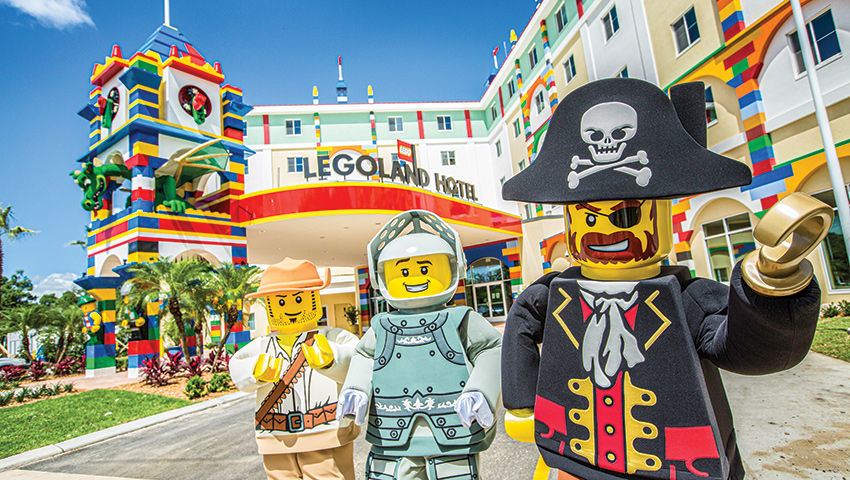 Beyond the mega-theme parks, Central Florida offers a more laid-back approach to meeting and staying, with the same great weather, but fewer crowds.

Al Snow, sales, meetings and events representative with Visit Central Florida in Polk County, promotes the destination’s convenient location between the behemoths of Orlando and Tampa, where a healthy culinary and brew pub scene is growing—see Scarpa’s Italian in Lakeland for a penne Vernazza that leaves guests feeling as if part of a big Salerno family.

“We have the quality of the bigger cities, but less traffic and a lot more outdoor natural beauty,” he said.

The destination is home to its own theme park—Legoland—which is adding three new attractions this year, including The Lego Movie Masters of Flight, a 180-degree rotating theater attraction with additional 4D elements, such as smells and water sprays. Two hotels currently serve the attraction—Legoland Florida Resort (152 guest rooms) and Legoland Beach Retreat on the shore of Lake Dexter (166 guest rooms in 83 themed bungalows). A 150-room Pirate Island Hotel is planned for spring 2020 with a treasure chest of themed in-room amenities.

The verdant landscape is also fertile ground for new meeting infrastructure. A new 130-room Marriott SpringHill Suites is slated for construction near RP Funding Center—a 100,000-square-foot entertainment complex colocated with a 127-room Hyatt Place. In total, 2,500 guest rooms are within a 2-mile radius of the center. Although there is plenty of room for attendees to roam free in the conference center and beyond, “We embrace smaller groups,” Snow said.