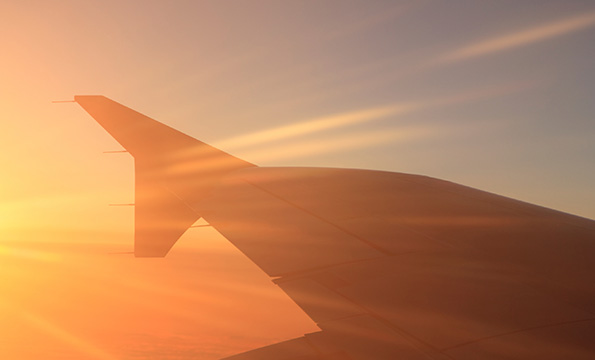 A solar-powered airplane has begun its first journey around the globe without a single drop of fossil fuels. Early this Monday morning, the Solar Impulse 2 took off from Abu Dhabi to cover 21,700 miles in 25 days over the course of five months.

Solar Impulse founders Andre Borschberg and Bertrand Piccard will take turns piloting the single-seat aircraft as it makes nine stops in five different countries. The 5,070-pound plane with a wingspan of 236 feet will aim for an optimal speed of 28 miles per hour. It will maintain an altitude of 28,000 feet during the day and 5,000 feet at night.

The two pilots have a long-haul ahead of them. Some legs of the trip will require them to fly straight through five days and five nights, such as trips over the ocean. The cockpit is no larger than a telephone booth, yet neither pilot will be able to stand while flying.

To prepare for the journey, the two men practiced yoga and self-hypnosis to manage fatigue and anxiety. During solo flights, they will be allowed to take twelve 20 minute naps over a 24-hour period. The men will be armed with electronic devices and alarms to maintain their focus. Goggles with timed light-flashes will be worn as an alarm device. If the plane is not flying level, armbands will buzz to alert them.

At the ground control room in Monaco, the pilots’ blood oxygen levels, sleep levels and amount of food and water will constantly be monitored. The Solar Impulse website has up-to-date information on the plane’s battery status, energy consumption, location and flight path.