After months of postponing, ConferenceDirect brought its Annual Partner Meeting to the new $375 million CAESARS FORUM this week as the first live event in the 550,000-square-foot conference center located in the heart of the Las Vegas Strip. “We were proud to take the leap and partner with Caesars to serve as an example of how we can safely get back to meeting,” said J.J. Wills, senior vice president of marketing programs and business development with the global meetings solution company.

The event preserved many of the elements of the program that was originally planned for May, including education, a trade show, awards banquet and reception, but made some strategic adjustments to keep everyone safe. Willis and Don Ross, Caesars Entertainment vice president of catering, conventions and events, agreed to share some of the lessons learned during the four-day hybrid event. 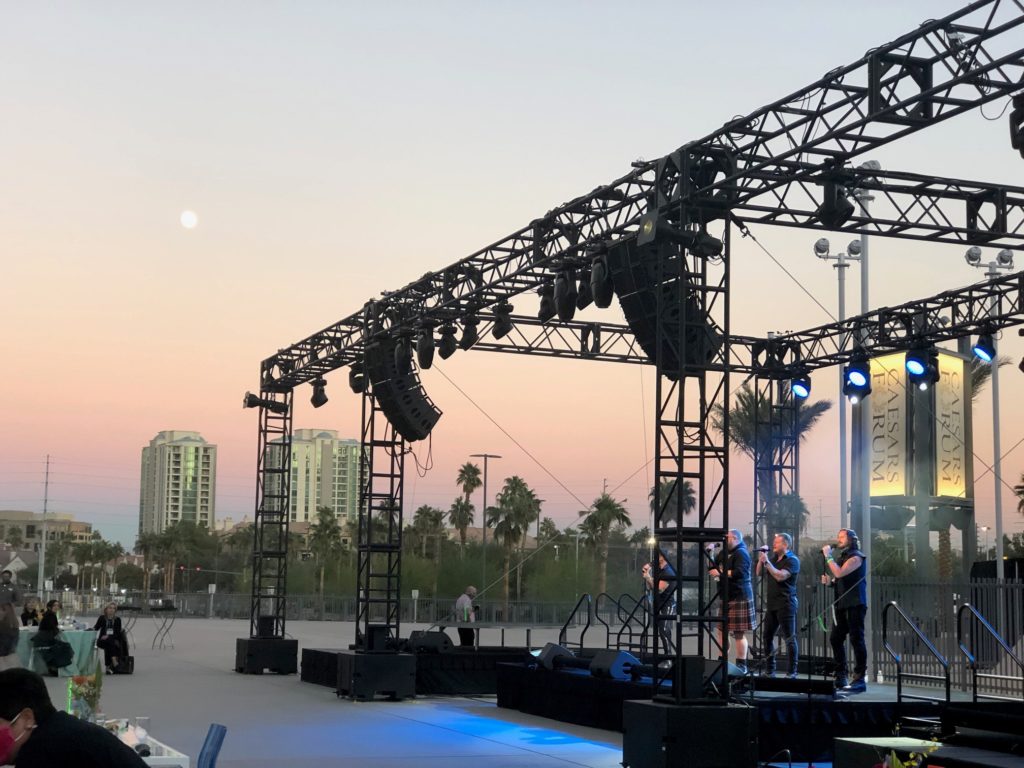 FORUM originally planned a March opening and had a full calendar for the year before the pandemic arrived with other ideas. ConferenceDirect first postponed to August and only 30 days before the October 26 event did Nevada Governor Steve Sisolak adjust the guidelines to allow 250 people to meet in the state. “We always knew that when it was legal, we would come,” Wills said.

While she would normally bring 900 people, she instead created a program for 130 in the 110,000 sq. ft. pillarless ballroom (one of two that size along with two 40,000 sq. ft. spaces and a row of well-appointed boardrooms) with a virtual component managed by AV partner Encore Productions. “Everyone has their own comfort level and we wanted to accommodate that,” Wills said.

Diane Schroder, a director of global accounts who attended virtually, praised the value of the event. “ConferenceDirect now has experts in virtual/hybrid meetings and a newly launched Meeting Marketing team that can help all client make the transition from face to face meetings to virtual meetings, to hybrid meetings (most likely for 2021) and then back to the face to face events for years to come.”

Communication and signage are key, Ross said. “We started writing protocols as soon as this started and we have done some groups in other properties, so we were ready.” The partnership was enhanced because Wills previously worked for Caesars and the teams understood each party’s strengths.

FORUM had the added bonus of minimizing transportation logistics because it is connected by a bridge to 8,500 hotel rooms at Harrah’s Las Vegas, LINQ Hotel + Experience and Flamingo Las Vegas.

Initially, Wills was hesitant to take on the responsibility of “getting into people’s medical business,” but eventually she embraced the concept by partnering with Health Shield to have people answer daily screening questions and temperature checks before entering the space.

“It helped people feel comfortable that everyone there was healthy,” she said.

The team drafted a plan that included a holding room and protocols in case anyone had symptoms and a dedicated EMT on call. “We didn’t need it, but it helped knowing we had a plan in place,” she said.

Ross said that hotels have always been focused on safety, but now that work is very public and visible.

One of the features of FORUM is the dedicated kitchen and culinary team lead by Chef Eric Vaughn that provides restaurant-quality meals based on fresh, seasonal ingredients. For the awards ceremony, which honored Caesars Entertainment Chief Sales Officer Michael Massari with the President’s Award, the ballroom was set up with 130 assigned “tables for one,” each six feet apart. The vignettes with a chair and small draped round allowed everyone to take their mask off and relax during the presentations, but still talk to the people near them. 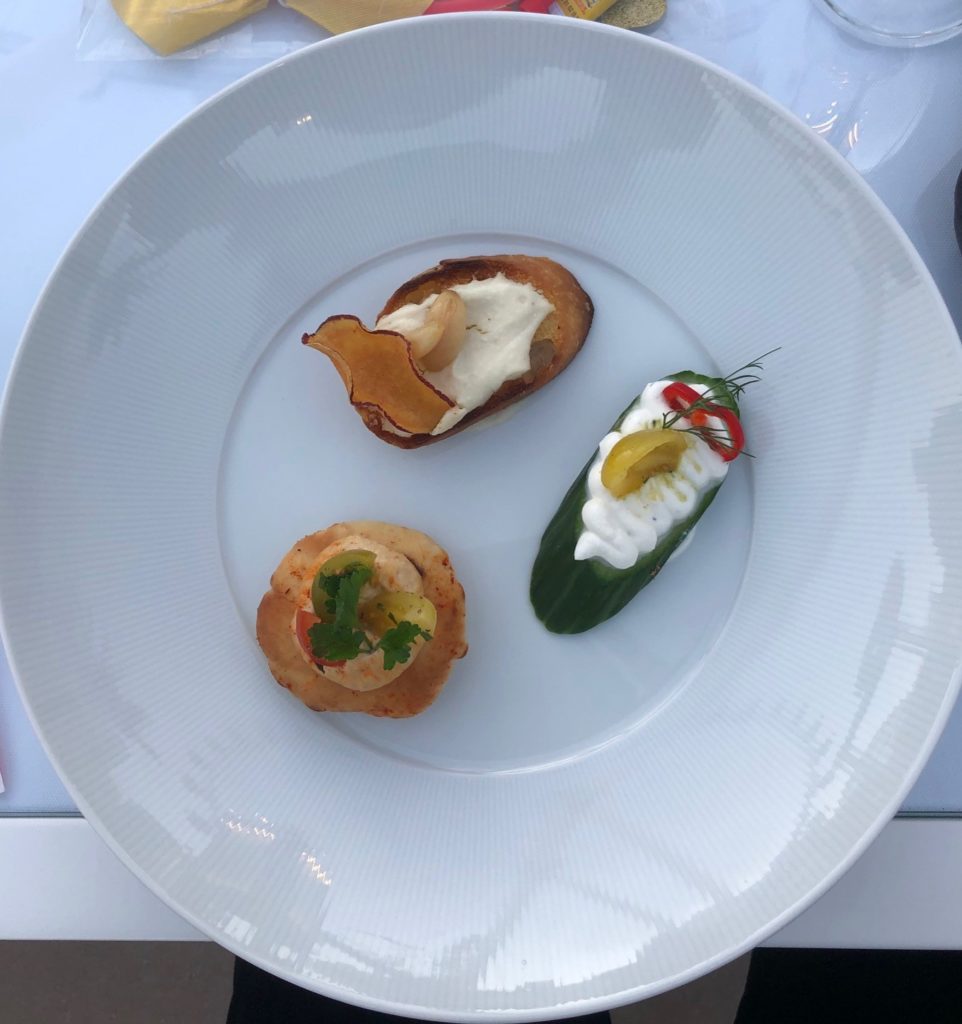 Similarly, the trade show allowed people to meet at 10-foot tables with wide aisles by appointment so there were no lines.

“Having so much space allowed us to really spread out and conform to the protocols,” Wills said.

For the closing session, everyone moved through the wide-open wall to the expansive patio that was lit up for the occasion. The building is equipped with branding opportunities from all angles. The massive LED wall inside can be programmed with dynamic video content and even the roof on the one-story expanse can be fitted with a message that is visible from the flight path at nearby McCarran Airport (LAS). 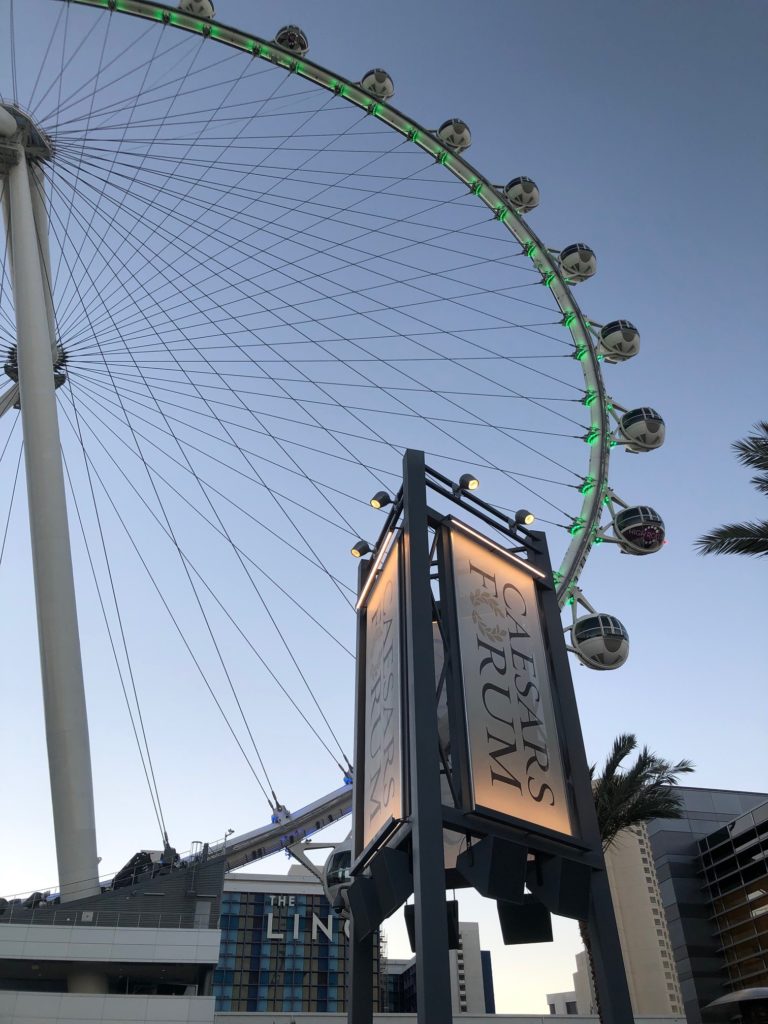 Masked waiters brought food and beverages to guests seated outside at tables of four with each of four courses uncovered with a flourish after it was delivered. Servers only touched clean plates and did not bus tables. No one could self-serve so even coffee was touchless.

That level of service required enhanced staffing, but Ross said it was essential for following protocols. Even chef action stations would have required people to stand in line masked and distanced for drinks and bites, then wait until they sit down and take off their mask to take a sip. “Serving them removed that natural tendency to walk and talk and drink.” 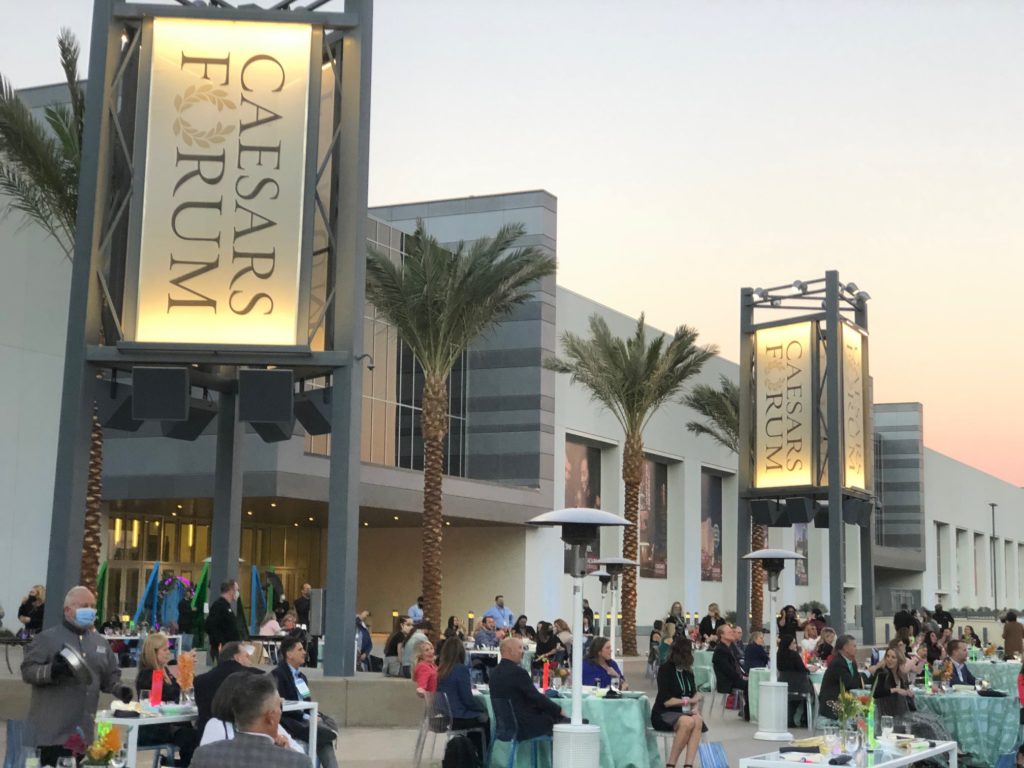 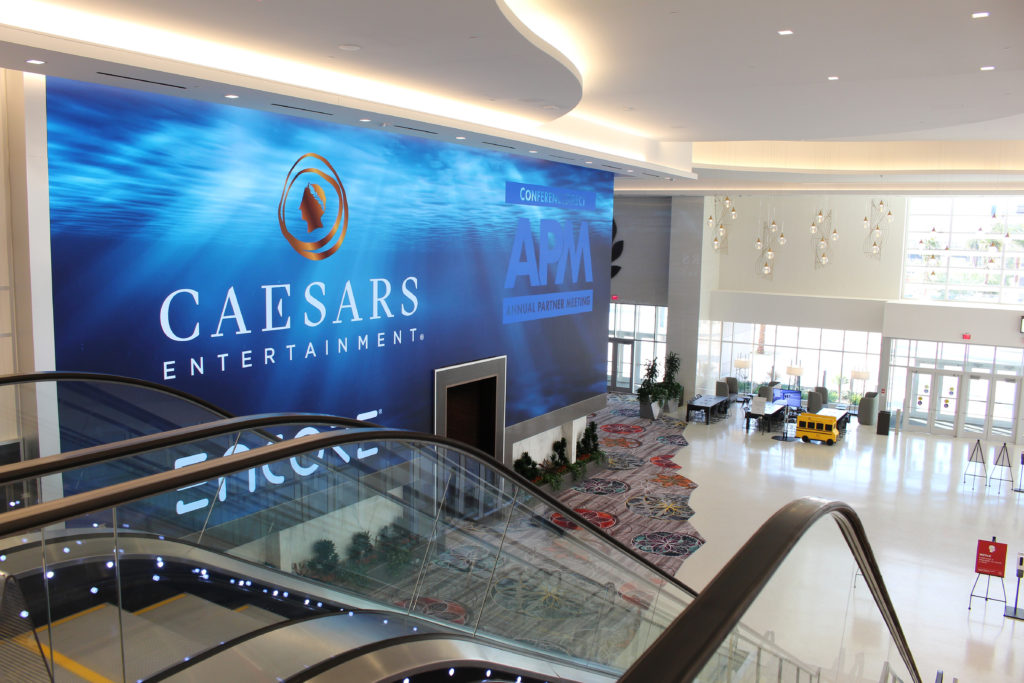 That final reception on the 100,000-square-foot Forum Plaza under the 550-foot High Roller observation wheel brought some of the only in Vegas talent to the outdoor stage (set 25-feet away from the tables) under the dusky desert sky.

“We have such beautiful climate and not a lot of outdoor areas that aren’t used during the day as pool space, so this will really help to get groups outside,” said Ross.

Breathe a Sigh of Relief

At the end of the day, he reported that the team was just delighted to be able to get to work. They were chosen for their customer service skills at the end of last year in anticipation of a March opening and it was a relief to break out the boxes of silverware and plates and do what they have been planning to do.

Wills agreed. “It just felt good to have some semblance of normal,” she said with a smile (partly hidden behind her mask).

You may be wondering, what does it look like when an annual convention returns after a one-year forced hiatus? Imagine having no contact with a friend for 14 months, but the moment you reconvene, the connection is so strong it’s as if that lapse never happened at all. Yeah, it’s kind of like that.

How to Write a Perfect Invitation Email for Your Virtual Event

VR: What Is It Good For?