PCMA has become known for lining up top speakers—this year, Convening Leaders added author Seth Godin and actor Geena Davis to the mix—and sessions that speak to the problems that keep planners up at night—“turning sponsors into partners” and “managing risk in a complex world” come to mind. But how does an organization with more than 7,000 members keep the content fresh?

Before the first drink had been poured at the opening reception for the gathering, held in Pittsburgh, a group of planner-disrupters had been crowned for coming up with a way to make the next gathering even more effective.

Hackathon Mastery, led by Experient Vice President of Sales Jamie Murdock and Retirepreneur founder Donna Kastner, gathered 40 participants early Sunday morning and challenged them to come up with new strategies to ensure sticky learning so that PCMA can remain relevant and attract a diverse audience. The seven teams used unorthodox methods normally employed in the technology field to find innovative solutions. This included starting with bursts of questions, rather than going right for the solutions, gathering diverse teams and encouraging everyone to contribute.

“If you are an event strategist who likes timetables, this isn’t for you,” Murdock said. “It requires getting really comfortable with beautiful chaos, but it is very powerful.”

At the end of the day, the teams pitched their ideas in three-minute, low-tech presentations in front of a panel of judges. Ideas ranged from creating “educon tribes” to helping attendees “move from knowing to doing” by holding them accountable for actually implementing what was learned at the conference when they return to their desks to a Cause Lab that would make it easy for planners to help local charities with mentoring. The winner was a #knowthyself quiz that would allow attendees to find out what learning style works for them and suggest an agenda based on the results.

Play to Your Strengths 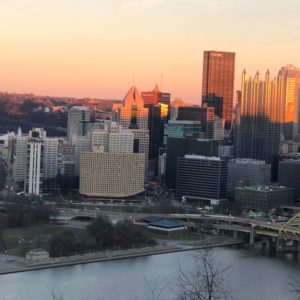 An informal poll of attendees at the opening night reception at David L. Lawrence Convention Center showed that the overwhelming majority had never been to the Pennsylvania metropolis before. However, thanks to some careful—and memorable—Pittsburgh placements, they now know a lot more about it.

The city has moved on from its less-than-environmentally friendly manufacturing roots and is now one of the greenest cities in the country. To prove it, recycling areas were at the end of each table in the LEED-certified platinum building.

Former brick warehouses are now trendy condos, restaurants and tech companies, including a major Uber research facility for self-driving cars. That tech-forward vibe was visible in the drones delivering cocktails and one agile “robot” dancing with attendees to Journey’s “Don’t Stop Believin’.”

The city is also home to the thriving Cultural District, which boasts seven theaters and is within walking distance of the convention center. Since one theater happened to be hosting a production of Hamilton, three of the actors stopped by to surprise guests with a few numbers from the hit Broadway play. Now that was memorable.