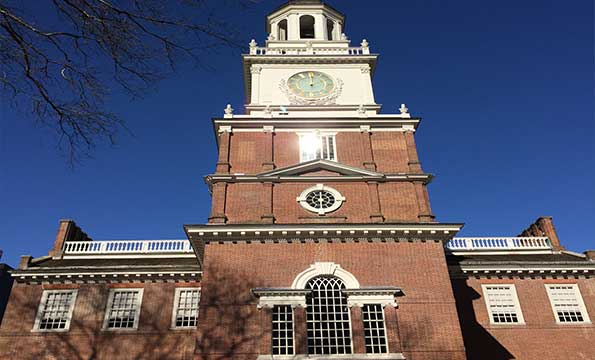 While it’s common business practice to avoid talking about religion and politics, we’re going to have to forgive the Philadelphia Convention & Visitors Bureau for dwelling on these lightening-rod topics during the next 17 months.

The City of Brotherly Love has a couple of huge events on the horizon thanks to religion and politics. Pope Francis will make his first U.S. appearance in September in conjunction with the World Meeting of Families convention. Then in July 2016, the Democratic National Convention will convene in Philly to choose the party’s presidential candidate.

“Our selection validates what meeting planners across the country know─that Philadelphia is a world-class city ready for the world’s top meetings and conventions,” said Julie Coker Graham, executive vice president of the Philadelphia CVB. “From the city’s walkability and vibrancy, to the comprehensive hotel package and ease of accessibility, we demonstrated why Philadelphia is the ideal location for this important convention throughout the DNC bid process. The delegate experience that we promote to our clients every day is one of our strongest assets and we are delighted that such a prominent group has chosen to come here.”

Philly beat out Columbus, Ohio and Brooklyn, New York, to host the convention. The original field also included Birmingham, Alabama, and Phoenix. Although the 2016 convention will be the first time since 1948 that the DNC will come to town, Philly hosted the Republican National Convention in 2000. It’s estimated that the 2016 DNC will generate between $170 and $250 million in economic impact for the city.

Philadelphia has been an epicenter for both religious freedom and important political decisions before the United States was the United States. These contributions come to life throughout the city’s historic district, which includes many houses of worship, and of course, Independence Hall where the Declaration of Independence was prepared and signed.

While attending the Global Pharmaceutical and Medical Meetings Summit in Philly Feb. 10-12, I carved out some time to stroll through the historic district. I was especially awed by tributes to Philadelphia’s open-mindedness way back in the 1700s. Pennsylvania founding father William Penn established a colony for his fellow Quakers to escape religious persecution and he encouraged other separatist sects, including Jews, to join them. Religious tolerance led to new denominations such as the African Methodist Episcopal Church (A.M.E.).

Today, visitors can learn about religious freedom by checking out the National Museum of American Jewish History, the only museum dedicated to chronicling the American Jewish experience. Famous Christ Church, where Benjamin Franklin worshiped, and the Presbyterian Historical Society also reflect the city’s religious tolerance.  Mother Bethel A.M.E. Church was founded in 1792, and the site is the oldest property continuously owned by African Americans.

Similarly, U.S. political history abounds. Philadelphia served as the nation’s capital from 1790 to 1800 while government buildings were erected in Washington, D.C. At Independence Hall, you can actually enter the room where the Declaration of Independence was signed in 1776. Now part of the National Park Service, Independence Hall features the chair George Washington sat in while he and his colleagues decided the fate of the original 13 British colonies. Across the street from Independence Hall is Liberty Bell Center, a must-see for all history buffs.

So expect to hear a lot more from the Philadelphia CVB about religion and politics. These topics may be taboo in many circles, but they are part of Philadelphia’s DNA.

Road Back to IMEX: Committed to November in Vegas

Story Behind the Decision to Focus on IMEX America Live; Smaller Online

Tips for Meeting on Purpose from Canvas