No. 1 US convention city entertains all ages

The theme parks and hotel lagoons popping up like orange blossoms in Orlando may look like good family entertainment, but the attraction of sun and fun is big business. International travel to Orlando is on track to outperform total international travel to the United States, according to estimates released in July.

A report from ForwardKeys shows international travel to Orlando planned for the next six months is up 2.4 percent, versus a decline of 2.5 percent for the United States as a whole. Visit Orlando President George Aguel cites strong employment numbers, cheap gas prices and rising incomes for the increase. “Orlando offers a number of other reasons to visit, including the debuts of several exciting new attractions and abundance of options for visitors of all ages,” he says.

That appeal to an adult meeting audience is a big economic factor in both Orlando and Kissimmee (pronounced ka-SIM-mee). The American Sportfishing Association brought 11,000 people in July and had an estimated economic impact of $21.6 million. Also impactful were United States Conference of Catholic Bishops (3,500 people and $6.9 million) and Florida United Numismatists (5,000 currency collectors and $9.8 million).

Executive Meeting center at The Villas of Grand Cypress Resort

The reasons event professionals choose the area are as varied as the number of lands at Walt Disney World. When Henry Apfel, manager of global accounts at HelmsBriscoe, was helping a Pensacola electronics software company find a location for an annual meeting that attracts 800 people, Kissimmee was an appealing choice because it helped with the guilt complex that many business people experience when they are away from home a lot. The area scored high for air service, sunny weather and an abundance of meeting space, so the event has room to grow.

Fred Shea, senior vice president of sales and services at Visit Orlando, says the reason the region continues to dominate the meeting industry goes back to its entertainment roots. “We started as a theme park destination—seven of the top 10 parks in the world are located there,” he says. “And one of the defining features of theme parks is that they have to keep renovating regularly to stay relevant. That constant reinvention is in our DNA.”

The attractions justified hotels building rooms for travelers, which lured large groups, which has attracted more hotels and conference space. It all builds. “The properties compete by putting more money into renovations,” Shea says. Orange County Convention Center just completed a renovation and is in the planning process for another expansion. Almost every hotel seems to be undergoing upgrades. This improvement begetting more improvements keeps everything fresh and new.

Shea also credits a new generation of consumers for demanding new types of venues. “As a baby boomer, I did what event organizers told me,” he says. “I went to the convention center and never saw the city. The younger generation wants to experience the destination beyond the parks.” That is where things such as the raceways, escape rooms, sky diving and dining as an experience become a requirement for bringing events to town.

Regardless of whether you are thinking of bringing a group to the entertainment capital of the world for the first time or the 100th time, you will find even more ways to arrive, play, stay, meet and dine as the hospitality sector has been investing heavily in coming up with new ways to take your breath away.

Just Getting to Greater Orlando from anywhere in the world will soon be even easier. A $1.8 billion south terminal expansion at Orlando International Airport (MCO) will add a railway stop to connect to the city, more than 16 gates and a palm tree-lined interior boulevard—a moving sidewalk that will span from gate to ground transportation. It is scheduled to open in 2019 and is designed to improve the traveler experience while bringing more direct flights from places including Providence, Rhode Island, and Paris, France, making it easier than ever to plan both domestic and international conferences.

“The airport expansion will help get attendees in and out of the check-in area faster so they can spend more time at the venues,” Shea says.

Theme parks are in the business of delighting visitors, Shea explains. The fact that they are right there makes the job of the event planner easy. “Leave it to the experts,” he says.

In May, Walt Disney World Resort hit play on its newest land, Pandora—The World of Avatar, an alien landscape filled with cascading waterfalls, bioluminescent foliage, floating mountains and lifelike audio-animatronic guides. Flights of fancy and interactive opportunities designed by the happiness experts take all the work out of planning a memorable event.

More is on the way. Walt Disney Parks and Resorts Chairman Bob Chapek announced that a new land, Star Wars: Galaxy’s Edge—complete with an interactive Millennium Falcon—is scheduled to open at Walt Disney World Resort in 2019.

At Universal Orlando Resort, Volcano Bay, a 30-acre water theme park, recently opened with a multidirectional wave pool, sandy beaches, a peaceful winding river, raft rides and speeding body slides that drop from the top of a volcano into the waters below.

Nearby, SeaWorld Parks and Entertainment recently opened Kraken Unleashed, a floorless, virtual reality roller coaster. For those looking for something more natural, Dolphin Days highlights the importance of these water-loving mammals while the new Dolphin Nursery cranks up the cute factor.

At the new Andretti Indoor Karting & Games, visitors can try their hand at electronic go-karting, racing simulators and laser tag, or sit in the Andretti Grill and watch the action.

I-Drive 360 has become a one-stop shop for adult adventures. The 400-foot-tall Coca-Cola Orlando Eye observation wheel, Sea Life Orlando Aquarium and Madame Tussauds Wax Museum all accommodate large groups indoors or out. New to the venue from South Beach is Mango’s Tropical Cafe, a Latin-themed musical experience that caters to groups as large as 2,000. Whether it is tango lessons and ropa vieja for 25 or a buffet, they can accommodate.

Still on the horizon is Skyplex, a $500 million complex on International Drive that will feature the world’s tallest roller coaster, an adult game room, a high-speed go-cart track, 450 guest rooms and a 535-foot-tall Skyplex Observation Deck. Look for the thrills to open sometime in 2020.

Orlando and Kissimmee offer every type of accommodation imaginable. Kissimmee alone hosts more than 7 million sleepovers each year and is in the midst of a vacation home construction boom. Meanwhile, back at the resort, new doors are opening by the thousands.

In addition to the 2,000 guest rooms added at Loews Sapphire Falls Resort in September, Universal’s Aventura Hotel will add 600 rooms to Universal Orlando Resort in summer 2018. The star attraction for this property will be a rooftop bar overlooking the new volcano attraction. This will bring the total number of guest rooms across six hotels to 6,200.

Omni Orlando Resort at ChampionsGate completed a $40 million expansion that added 23,000 sq. ft. of recreational space, including Kissimmee’s only resort wave pool, a 93-room villa product and 100,000 sq. ft. of event lawn and conference center space. The 720-room property offers 36 holes of championship golf and 18-hole miniature golf. Bohemian Hotel Celebration unveiled a $1 million makeover of all 115 guest rooms to match the Florida-chic of the lobby.

The $750 million Margaritaville Resort Orlando will channel Jimmy Buffet with a mix of 1,000 units modeled after vacation homes, villages and cottages built around a 45-acre lake, complete with a 12-acre water park and snorkeling. The hotel property incorporates 30,000 sq. ft. of tropical-themed event space and is scheduled to open in 2018.

Most exciting for those enchanted by The Force is the recent announcement that Disney will be building an interactive Star Wars-themed hotel, scheduled to open in 2019. The rooms will look and feel like a spaceship and visitors will participate in an immersive experience, including costumes, lightsaber duels and flight lessons.

Inside or out, Florida’s sunny disposition makes it possible to do both. When Tina-Marie Wassman, the principal at TNC Events, was looking for an East Coast destination for a team of 400 people who met in Palm Springs, California, last year, she wanted a place where they could dine outside in the late winter. “The Orlando/Kissimmee area has lots to offer,” she says.

With 2.1 million sq. ft. of exhibit space, Orange County Convention Center is one of the largest trade show venues in the country. Recently completed renovation of the West Building added 5,000 sq. ft. of meeting space and it includes the largest public “aeroponic” garden. The two new ballrooms and a new pedestrian bridge to Hyatt Regency Orlando will help with traffic flow and increase options for creating unique meeting configurations. Another $500 million expansion for the North-South Building is in the planning stages.

Private developers are also continuing to step up their game. Walt Disney World Swan and Dolphin is spending $140 million to renovate all 2,267 rooms and 329,000 sq. ft. of meeting space while Disney Yacht and Beach Club Resort will get 28,000 sq. ft. of new event space. Meanwhile, at Disney’s Coronado Springs Resort, a new 500-room tower, boardroom and rooftop restaurant with firework views will open new possibilities for experiences that leave an impression.

DoubleTree by Hilton Orlando at SeaWorld is planning a 20,000–square-foot ballroom and meeting space addition that will bring the total event capacity to 100,000 sq. ft., all in close proximity to the convention center and attractions.

Guest room at DoubleTree by Hilton Orlando at SeaWorld

Also recently renovated is the 1,334-room Rosen Centre Hotel, which links to the Orange County Convention Center via a covered bridge. It offers 150,000 sq. ft. of meeting space, including 35 meeting rooms and 35,000 sq. ft. of exhibit space in the grand ballroom.

“If you haven’t been to Orlando in 10 years, the growth in the adult restaurant business can be a shock,” Shea says.

People are surprised by the amount of quality restaurants and the celebrity chefs behind some of the new places competing for leisure travelers, convention business and locals in equal measure. In fact, the line between what each of these groups want in a dining experience is blurring as Orlando becomes one of the most popular bleisure travel destinations in the country.

Disney Springs continues to bring new dining options to a unique shopping and playing experience. Have you explored the Planet Hollywood Observatory star-studded memorabilia walls yet?

For those looking for a local foodie experience, Island Grove Winery Company at Formosa Gardens, opening this summer, is a sustainable bistro, winery and microbrewery that uses biodynamic practices, permaculture and hydroponics to grow organic fruits and vegetables on site. Guests can sign up for tours and tastings, or simply enjoy a guilt-free meal in the middle of a lush garden setting.

A vibrant, exciting nightlife is another mark of the maturing of this family destination. A sophisticated vibe has emerged as venues such as BB King’s Blues Club (Pointe Orlando) and Blue Martini (Pointe Orlando) have joined House of Blues (Disney Springs), The Groove multi-level dance club (Universal Orlando) and Bob Marley—A Tribute to Freedom restaurant, bar and nightclub (Universal Orlando). “CityWalk is partying until 2 a.m. every morning,” Shea says. 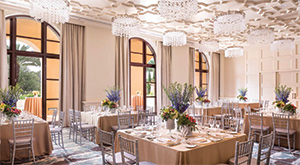 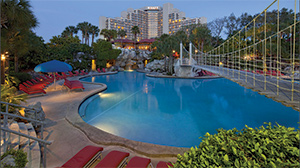 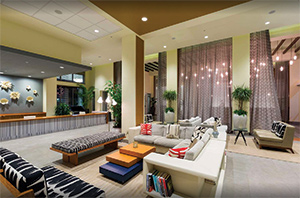 Meeting in the Top 10 Cities for Geeks in the U.S.