Caesars Entertainment is home to 50 first-class properties across 20 destinations. With iconic brands well-loved by regular meeting-goers and planners, Caesars continues to elevate its offerings at each of its destinations with new conference spaces, celebrity restaurants, exclusive entertainment options, and more.

Catch up with everything the empire debuted already in 2022 and get a sneak peek at what’s to come for the rest of the year:

The newest addition to the Caesars Entertainment family, CAESARS FORUM with 550,000 sq. ft. of conference space hosted the 2022 NFL Draft welcoming thousands of ecstatic sports fans. For the ultra-high-profile event, the FORUM created an enormous stage for the draft and stretched its outdoor space including nearby Linq Promenade parking lots to accommodate the massive audience. Located within direct access to 8,500 hotel rooms at Harrah’s Las Vegas, The LINQ, and Flamingo, CAESARS FORUM provides the two largest pillarless ballrooms in the world, modern design, and flexibility.

In close proximity to CAESARS FORUM, the world of celebrity chefs has taken over Paris Las Vegas with a constellation of star-studded restaurants debuting at the property. The world-renowned Chef Nobu Matsuhisa opened a second Las Vegas location for his eponymous Nobu restaurant. Two restaurateurs you’re as likely to see on tv as in the kitchen, Lisa Vanderpump and Bobby Flay, debuted their new Paris concepts – Vanderpump at Paris and Bobby’s Burgers. Still to come is culinary legend Martha Stewart’s first-ever restaurant, The Bedford, later this year. 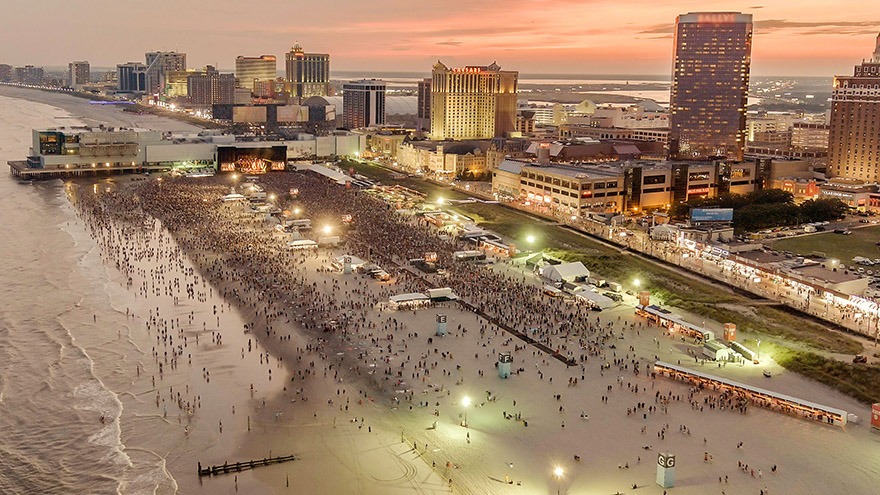 Another legend making his Las Vegas debut is EGOT-winner John Legend whose “Love in Las Vegas” residency at Zappos Theater at Planet Hollywood Resort & Casino runs through October. Sharing a theater with the crooner and providing her own flavor of boot-tapping entertainment is country music sweetheart Miranda Lambert with her “Velvet Rodeo, the Las Vegas Residency” engagement in September.

In addition to massive meeting spaces, decadent eateries, and extravagant entertainment, Caesars Entertainment has not failed to update the backbone of any visit: the accommodations. Harrah’s Las Vegas’ rooms and casino floor have undergone extensive renovations. Meanwhile, Bally’s Las Vegas is undergoing a complete transformation from its exterior to its rooms and casino floor to reintroduce itself as Horseshoe Las Vegas by the end of 2022.

At the Tropicana, Gordon Ramsay Hell’s Kitchen will be bringing the heat with its second Atlantic City location. Just like its sister property on The Strip, Caesars Atlantic City is getting its very own Nobu restaurant. For entertainment, Spiegelworld – the creators behind the oddball cabaret Absinthe in Las Vegas – will be debuting an original show at Caesars Palace in 2023.

In addition to exciting new food and entertainment concepts, Caesars Entertainment’s investment is making strides in sustainability. DSD Renewables and Caesars Entertainment broke ground this April on an 8.4 MW solar portfolio spanning the Atlantic City properties. Projected to be complete in late 2022, the installations are expected to generate 10,425,453 kWh of clean, renewable energy annually helping propel Caesars toward its goal of reducing greenhouse gas emissions by 100 percent before 2050.

At MGM Resorts, we accepted the challenge of ensuring that our meeting experiences and options are not only robust and plentiful but inspirational as well.

Asheville: Meet Where Community Is Strong and Creative Spirit Abundant